In addition to the Cigar Mile there were three other Graded Stakes at Aqueduct this weekend. On Friday, Stellar Jayne was the heavy favorite in the Top Flight Handicap as she made the final start of her career, while on Saturday there were two 1 1/8 mile races for the juvenile colts and fillies, the Remsen and Demoiselle stakes. 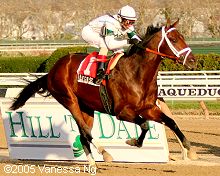 The $200,000 Remsen (G2) for males saw 3-5 favorite Bluegrass Cat lead every step of the way, holding off the stubborn 19-1 longshot Flashy Bull the entire lap of the track for the 1 1/2 length victory. It was a long 4 1/2 lengths back to 13-1 shot Parkhimonbroadway in third. The winning time was 1:52.20 over the fast main track. 4-1 second choice Congo King was in contention in third early but faded in the lane finishing sixth.
Results Chart from DRF 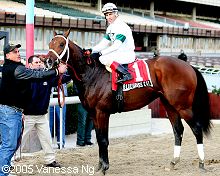 Bluegrass Cat in the winner's circle after the Remsen. Winning jockey John Velazquez, having won four races on the card, said, "He pulled me to the lead. He got a little scared early. No one wanted to go early, so I had to take it. He's quite a fighter. He was a little spooked at the end of the race when he saw a tire track. But, he's a nice horse and I look forward to next year."

Winning trainer Todd Pletcher said, "He didn't break super cleanly, but he recovered well enough to dictate some reasonable fractions. I told Johnny to play on the break, and if he got the lead, fine. He sat off horses before. Kiaran's horse (Flashy Bull) ran a huge race. We'll give him a few days and then head down south. He's come a long way in a short period of time." 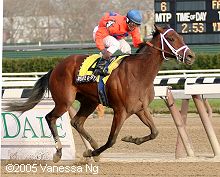 The $200,000 Demoiselle saw just five juvenile fillies go to post. 10-1 longest shot Wonder Lady Anne L was bumped at the start and raced back in fourth early, but rallied three-wide around the turn and drew clear in the final furlong to win by 2 3/4 lengths over 2-1 second choice Cinderella's Dream in a time of 1:52.85. It was another 1 1/2 lengths back to 3-1 third choice Wait a While in third. 9-5 favorite Better Now sat off the pace early but failed to fire when asked, finishing last.
Results Chart from DRF 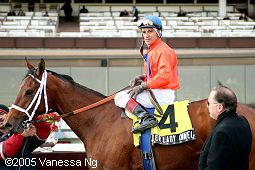 Wonder Lady Anne L in the winner's circle. Winning jockey Cornelio Velasquez said, "My filly ran good. She broke good. At the half-mile pole, I moved her up there and she came running. She's a nice filly."

Winning trainer Richard Dutrow Jr. said, , "I told Cornelio (Velasquez) that I didn't want her to go out after the lead; we wanted her to relax in the first part. He got her to settle nicely, and he worked out a great trip. I don't know what we'll do with her next. When we bought her, I really liked the number that she ran down in Florida. Just by looking at her, it looked like she wanted to go long." 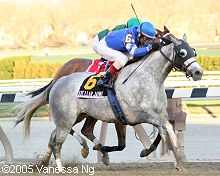 The Grade 2 Top Flight Handicap on Friday is the distaff equivalent of the Cigar Mile. Eight older fillies and mares went to post in this $150,000 event over a one-turn mile at Aqueduct. Stellar Jayne was sent off as the huge 3-5 favorite in her final career race, with regular rider Jerry Bailey aboard. 8-1 shot Bohemian Lady set a strong pace along the rail through a half in 45.01 and 3/4 in 1:09.43. With a furlong to go, Bohemian Lady was 1 1/2 lengths clear and looked to be home free, but Stellar Jayne, who settled in fourth early, had come out 3 wide on the turn and was closing strongly along the outside. Inside the 1/16 pole, the heavy favorite wore down the pacesetter, pulling ahead by just 1/2 a length at the finish in a final time of 1:35.94 over the fast track. It was a long 4 1/4 lengths back to 11-1 shot Seeking the Ante in third.
Results Chart from DRF 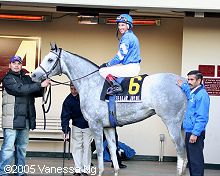 Stellar Jayne and Jerry Bailey in the winner's circle after the Top Flight. Bailey said, "I figured if they outran me by any substantial margin, they were going too fast. She didn't really feel comfortable in between horses, so opted to get her out. I really didn't think Bohemian Lady wanted to go that far off those early splits. I figured that if everybody ran according to form, I would get there." Stellar Jayne was shipped to Jonabell Farm in Kentucky on Sunday to begin her new career as a broodmare for owner Godolphin Racing.

Back to the Cigar Mile results and photos