Belmont Park hosted three Grade 1 events on Saturday afternoon before just 5,910 fans under sunny skies and temperatures in the mid 70's, two of which are Breeders' Cup Challenge "Win and You're In" qualifiers in the 2-year-old dirt divisions.

The $500,000 Foxwoods Champagne Stakes (G1) features 2-year-olds going 1 mile around 1 turn of the main track, with the winner earning a spot in the Breeders' Cup Juvenile on November 2 at Santa Anita. Honor Code was sent off as the 9-5 favorite in the field of 9, off his debut win at Saratoga. In to challenge him included 2-1 second choice Strong Mandate, winner of the Hopeful (G1), and 5-2 third choice Havana, also off a Saratoga debut victory. 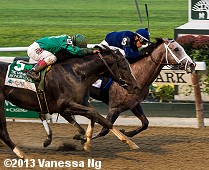 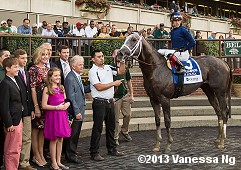 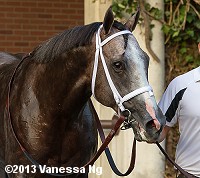 Left: Havana in the winner's circle. Trainer Todd Pletcher said, "They were throwing down some pretty solid fractions and he was in a bit of a difficult spot because he was inside. I thought we were going to be up close; I wasn't sure if anyone would be in front of us. I thought there was a couple that could press us. I think Irad did a good job of not giving up that position but not forcing it too much, either. He found himself three in front at the 1/4 pole when Debt Ceiling fell off. I could see the other horse revving up and I knew he had a big run from Saratoga. I was hoping we'd have enough to hold on."

Right: Havana heads back to the barn after the race. 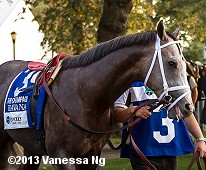 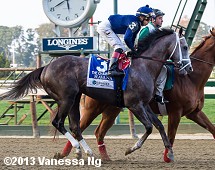 Left: Havana in the paddock. Jockey Irad Ortiz Jr. said, "In the first part I thought they were going too fast, so I waited a little bit. I had a couple horses beside me, so I had to use him a little earlier than I wanted. He got the lead early, but he was ready. When I asked him, he picked it up. He got a little tired at the end a little bit, but he was still running. He was perfect all the way. Thanks to the regular jockey, John Velazquez, he told me how to ride the horse, and it worked out." 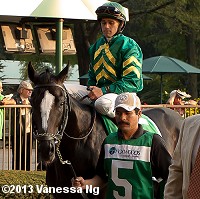 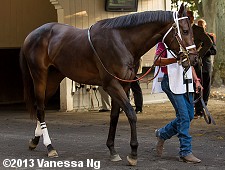 Left: Second place finisher and beaten favorite Honor Code in the paddock before the race. Jockey Javier Castellano said, "He put in a very strong effort in the last part of the race. I had to go wide, and it cost me a little bit. I'm really happy with the way he did it. I got beat today, but I think he has a great future. He's a big horse, and it takes him a while to build momentum in the beginning of the race. After that, he begins to pick it up. The pace set up perfectly."

Right: Third place finisher Ride On Curlin in the paddock. The 17-1 shot raced 8th under jockey Alex Solis then rallied to get third beaten 1 3/4 lengths. The Bill Gowan trainee improved his record to 1 win, 1 second, and 1 third in 4 starts, earning $84,929 for owner Dan Dougherty.


The distaff counterpart of the Champagne is the $500,000 Frizette Stakes (G1) for 2-year-old fillies going 1 mile on the main track, looking for an automatic entry into the Breeders' Cup Juvenile Fillies on November 1. Sweet Reason was sent off as the 3-4 favorite in the field of 7, undefeated in 2 starts including the Spinaway (G1) last out. In to challenge her included 3-1 second choice Stopchargingmaria, second in the Spinaway, and 4-1 thirc choice Artemis Agrotera, a debut winner by 11 lengths at Saratoga.

Jockey Luis Saez sent 12-1 Tea Time to the lead down the backstretch and she set fractions of 23.30, 47.41, and 1:11.81 while stalked by Artemis Agrotera. At the top of the stretch, Tea Time tired allowing Artemis Agrotera to inherit the lead. Sweet Reason, seventh early after a poor start, put in a strong rally but Artemis Agrotera cruised past the post 1 1/4 ;engths in front in 1:36.25. It was another 2 3/4 lengths back to Stopchargingmaria third. 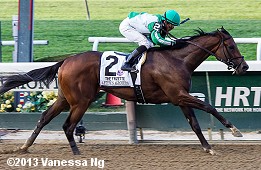 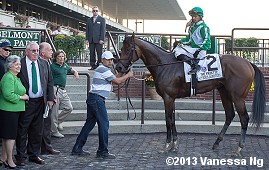 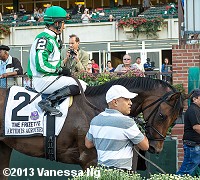 Left: Artemis Agrotera takes her walk down Victory Lane. Trainer Mike Hushion said, "I said to Jose, 'Be careful she just doesn't run off the first part of it.' If he tapped her once on the shoulder, she'd be gone, and he didn't. I saw (Sweet Reason) coming, but watching as many races as I have over this track, I knew at the 1/16 pole (Sweet Reason) had her work cut out for her and we were in good position." 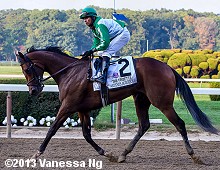 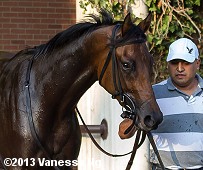 Left: Artemis Agrotera returns after the race. Jockey Jose Lezcano said, "She broke good, put herself in position, and when I asked her, she took off and won the race. She acted very, very professional today. She did everything right in the gate and in the race, and did the job."

Right: Artemis Agrotera heads back to the barn after the race. 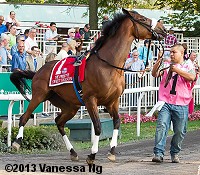 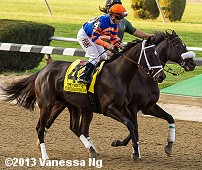 Left: Second place finisher and beaten favorite Sweet Reason wasn't very sweet in the paddock. Trainer Leah Gyarmati said, "It was a remarkable race. Obviously, she didn't get a very good start. She's already a horse that's going to be back a little bit, so it cost us probably five, six lengths. She proved she could handle a fast track, she was six wide, and she spotted the field several lengths at the start, so I'm very impressed with her. She certainly proved that she could overcome a lot of adversity, plus she can handle a fast track, which is what everybody's question was"


Kicking off the stakes action on Saturday was the $500,000 Jamaica Handicap (G1) for 3-year-olds going 1 1/8 miles over the inner turf course. A field of 12 (11 betting interests) went to post with the two-horse entry of Admiral Kitten, winner of the Secretariat Stakes (G1), and Get in Line, fifth in the Hall of Fame (G3), sent off as the 7-2 favorite. In to challenge him included 4-1 second choice Up With the Birds, winner of the Breeders' Stakes last out, and 9-2 third choice Jack Milton, third in the Secretariat. 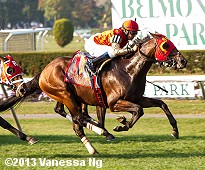 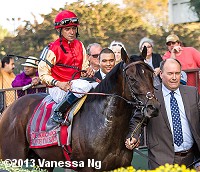 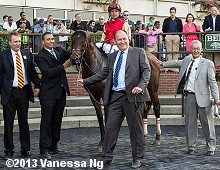 Left: Up With the Birds walks down Victory Lane led by owner Rick Balaz of Sam-Son Farm. Trainer Malcolm Pierce said, "I was a little worried that they were going a little too slow up front, and we were eight or nine lengths out of it, but he's a nice horse and he kicked when he asked him. You've got to give the jock a lot of credit and the horse a lot of credit. After he won the Breeders' Stakes at Woodbine, the owners all got together. This is a big step up from running against Canadian-breds in a Grade 1 in New York, but we said, 'What the heck. Let's give it a try.' He deserved this chance. He's run hard all year. He's going home for a rest now after this race."

Right: Up With the Birds in the winner's circle. 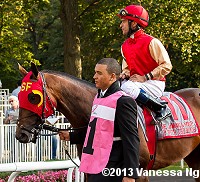 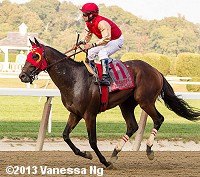 Up With the Birds in the paddock. Velasquez said, "I wanted to try and save ground, but there was a lot of traffic on the inside. I followed Notacatbutallama around the turn and once I got him to the outside, he gave me a good run. (Admiral Kitten) was coming on, but my horse dug in. He's a nice horse."

Right: Up With the Birds returns after the race. 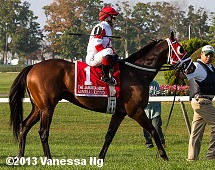 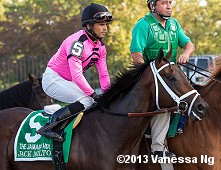 Left: Second place finisher and beaten favorite Admiral Kitten behind the starting gate. Jockey Rosie Napravnik said, "He ran excellent. The pace was absolutely pedestrian. He's the kind of horse that you can't change his running style. He just lags around the first turn and makes a big run. He ran huge."