There were three Grade 1 races at Belmont Park on Saturday afternoon, two of which are part of the Breeders' Cup Challenge "Win and You're In" program. Just 6,426 were on hand enjoying the sunny skies and temperatures in the mid 70's on Long Island, with a fast main track and firm turf course.

The $300,000 Champagne Stakes (G1) features 2-year-olds going 1 mile around 1 turn of the main track, with the winner earning a spot in the Breeders' Cup Juvenile on November 5 at Churchill Downs. Union Rags was sent off as the 6-5 favorite in the field of 8, undefeated in 2 lifetime starts, his debut at Delaware Park followed by a 7 length romp in the Saratoga Special (G1). In to challenge him included 2-1 second choice Alpha, winner of his debut at Saratoga last out, and 4-1 third choice Takes the Gold, off his maiden win at Belmont on September 10.

11-1 Power World was quickest away and set fractions of 22.74 and 45.84 while being stalked by 26-1 Right to Vote to his inside. On the turn, Right to Vote moved up to take over the lead from the tiring pacesetter through 3/4 in 1:10.37. Right to Vote held a short lead to the 1/8 pole, but favorite Union Rags, who was 5th early, found room outside and powered on by, winning going away by 5 1/4 lengths in 1:35.55 over the fast track. Alpha, last early, closed late to get second by a neck over Right to Vote third. 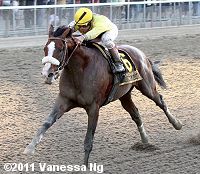 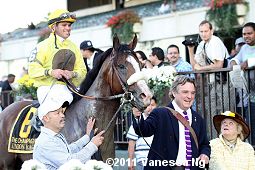 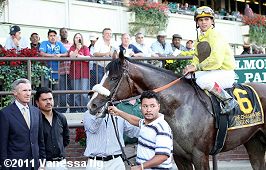 Union Rags in the winner's circle with trainer Michael Matz on the left. Matz said, "He's always acted like a nice horse from when we first got him. He's trained well this period he's been off. The timing is great now. The 7 weeks didn't hurt him between races. The (traffic) is going to happen with 2-year-olds, and they find a way out of it, don't they? I think he's a real good horse. Anytime you can win going five-eighths with me, you know they're nice horses. I've had horses on and off for Mrs. Wyeth, and she said to me, 'I'm going to have a good one for you,' and Ithink she does." 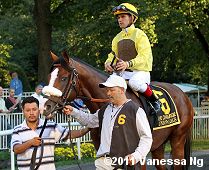 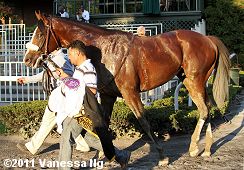 Left: Union Rags heads in the paddock. His jockey Javier Castellano said, "My plan 'A' was to be close to the pace. He's a really nice horse, and you can put him wherever you want. Unfortunately, in the first jump (Right to Vote) squeezed me, bumped really hard, and I lost the momentum right there. Now I had to change my plan to 'B' - come from behind horses. But he's an amazing horse - nothing bothers him. He got dirt in the face, he was blocked all the way on the trip. I tried to wait for my best opportunity to make that move."

Right: Union Rags returns to the barn after the race. His owner Phyllis Wyeth said, "I can't even talk. We didn't know what kind of horse we really had. I think he's good. We always had hopes for him, but it's really an honor, because my mother bred all the mares, and (he's) by my father's stallion. It's what they all lived to produce. It really is an honor." 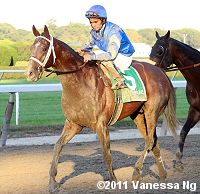 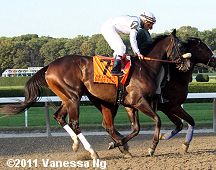 Left: Second place finisher Alpha returns after the race. Jockey Alan Garcia said, "He was acting up a little bit in the gate and he broke a little slow out of there. It cost me a lot the first part of the race, but he was running very hard at the end." Trainer Kiaran McLaughlin added, "I was happy with the way he ran in only his second start. He finished second to a very nice horse. We'll go on to the Breeders' Cup with him."

Right: Third place finisher Right to Vote in the post parade. The 26-1 longest shot stalked the pace under jockey Alex Solis, led into the stretch but tired late to finish third beaten 5 1/2 lengths. The Eoin Harty trainee improved his record to 1 win, 1 second, and 1 third in 3 starts, earning $70,000 for owners Casner Racing and Sam Pollock.


The distaff counterpart of the Champagne is the $300,000 Frizette Stakes (G1) for 2-year-old fillies going 1 mile on the main track, looking for an automatic entry into the Breeders' Cup Juvenile Fillies on November 5. Stopshoppingmaria was sent off as the even-money favorite in the field of 6 exiting her maiden win at Saratoga by 9 3/4 lengths. In to challenge her included 9-4 second choice My Miss Aurelia, winner of the Adirondack (G2) last out, and 9-2 third choice Spare Change, who broke her maiden by 8 lengths on August 21.

Jockey Corey Nakatani sent My Miss Aurelia to the lead exiting the chute and she set fractions of 22.64, 46.02, and 1:10.38 while pressed by Spare Change a length back in second. Entering the stretch, Stopshoppingmaria, who stalked the pace in third down the backstretch, attempted to close to no avail, as My Miss Aurelia drew off in the final 3/16 to win going away by 5 1/2 lengths in 1:35.22 over the fast track. It was another 3 1/2 lengths back to 7-1 Miss Netta third. 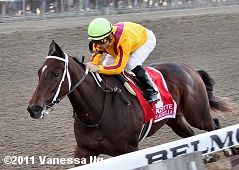 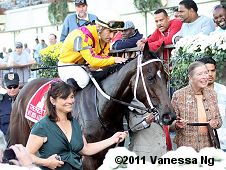 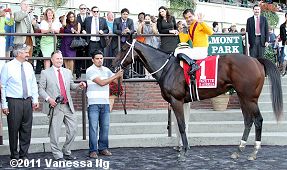 Left: My Miss Aurelia takes her walk down Victory Lane led by co-owner Barbara Banke (left) and Aurelia Bolton who she is named after. Banke said, "I raised this horse from a baby, and I have loved her from the time she was born. When it came time to name her, who else to name her for but Aurelia (co-owner George Bolton's mother)? Her performance today was spectacular, really spectacular."

Right: My Miss Aurelia in the winner's circle with trainer Steve Asmussen on the left. Asmussen said, "She's a special filly. I thought her Adirondack was an excellent race, the way it set up and she showed a lot of heart. We just wanted more of the same. Not moving forward from here, you're just expecting more of the same. We plan to go to Churchill with her on Monday, and hopefully everything goes perfectly." 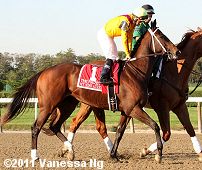 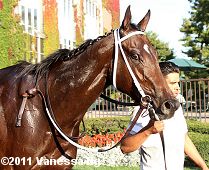 Left: My Miss Aurelia in the post parade. Jockey Corey Nakatani tied the single-day win record at Belmont Park in this race with his 6th victory on the card. He said, "That's an accomplishment that I never dreamed of getting the opportunity to do. I've always loved Belmont and the trainers and the owners have been great supporters of mine throughout the years. With things looking like they are in California, I decided to move back here, get my family back here, and make this home."

Right: My Miss Aurelia heads back to the barn after the race. Nakatani continued, "She actually would have gone faster if I let her; I was just trying to get her comfortable at a high cruising speed, knowing what her abilities are and what she can do when you ask her to go. You're basically just harnessing her energy and her power until the stretch and then you let her level out and do what she's got to do to win the race." 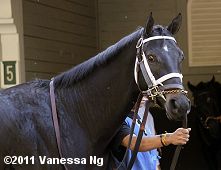 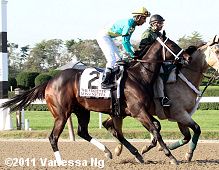 Left: Second place finisher and beaten favorite Stopshoppingmaria in the paddock. Her trainer Todd Pletcher said, "The track seemed to be really speed-favoring. All 3 dirt races have been won by the inside speed. I thought she ran really well considering she got bothered by the start, took some dirt and was a little green when she first did that. We're pleased with her effort. I think (she'll go to the Breeders' Cup), assuming she comes out of it well. The way the track was playing and everything today, I think she has a legitimate excuse."


Kicking off the stakes action on Saturday was the $250,000 Jamaica Handicap (G1) for 3-year-olds going 1 1/8 miles over the inner turf course. Saranac Stakes (G3) winner Brilliant Speed was sent off as the 11-10 favorite in the field of 7, over 5-2 second choice Casino Host, fifth in the Secretariat Stakes (G1) last out, and 7-1 third choice Western Aristocrat, in from England where he won the Kempton.co.uk Conditions Stakes on September 15.

Jockey Corey Nakatani sent Western Aristocrat to the lead first time past the stands and he set easy fractions of 26.27, 52.20, 1:16.21, and 1:38.57 over the firm turf, while being stalked by Brilliant Speed the whole way. Entering the stretch, Brilliant Speed moved up alongside to challenge but Western Aristocrat had plenty left in reserve, pulling ahead to prevail by 1 length in 1:50.34. It was another 3/4 length back to 22-1 longest shot Wilkinson third. 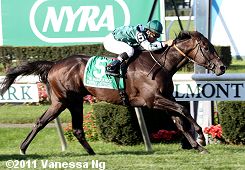 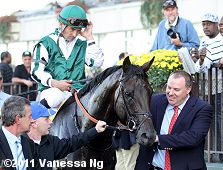 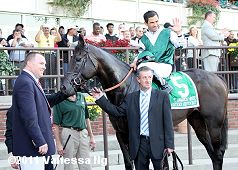 Left: Western Aristocrat walks down Victory Lane led by Tom Ludt of winning owner Vinery Stables. Ludt said, "He's done very well. Jeremy (trainer Noseda) gets all of our European horses but he used to train in America, and he said to me, 'Tom, I think this horse will really blossom in America,' so that was the plan. If he thinks they fit over here, he lets them come back. I love him for that. As long as he ran well - and he proved he did that - we really don't have a short-term plan. We'll keep him here (with Steve Asmussen). He'll definitely keep racing; he's been sound. We'll consider the Breeders' Cup Mile, but we'll let the horse tell us." 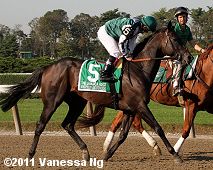 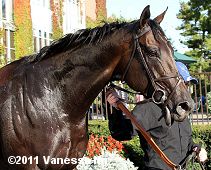 Left: Western Aristocrat in the post parade. His jockey Corey Nakatani said, "The plan was to keep him happy, wherever he was comfortable. I really didn't want to be on the lead, but we found ourselves up on the lead because there was no pace. It actually turned out for the better because he's able to do what he's able to do, and when I called on him he cut and re-broke and ran a big race."

Right: Western Aristocrat heads back to the barns after the race. 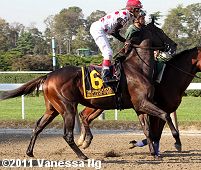 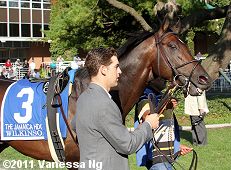 Left: Second place finisher and beaten favorite Brilliant Speed in the post parade. Jockey John Velazquez said, "We had great position. We picked it up at the half-mile pole, and couldn't get by him. Very simple." Trainer Tom Albertrani added, "He ran well. He had no excuse. He ranged up alongside the winner, who had something left to turn back his challenge."

Right: Third place finisher Wilkinson in the paddock. The 22-1 longest shot tracked the pace in 4th under jockey Alan Garcia, then passed one horse late to get third beaten 1 3/4 lengths. The Neil Howard trainee improved his record to 4 wins, 2 seconds, and 3 thirds in 13 starts, earning $218,353 for owner-breeder Gaillardia Stable.