The feature race on the second Sunday of the Saratoga meeting was the $500,000 Coaching Club American Oaks (G1), featuring some of the top 3-year-old fillies going 1 1/8 miles, one complete lap of the main track under sunny skies and temperatures in the high 70's. A short field of just 4 made final entry, with Kentucky Oaks (G1) and Ashland (G1) winner Malathaat sent off as the 3-10 favorite. In to challenge her included 11-4 second choice Clairiere 3rd in the Mother Goose (G2), 9-1 third choice Rockpaperscissors, making her stakes debut off 2 allowance wins, and 14-1 longest shot Maracuja, 7th in the Kentucky Oaks after finishing 2nd in the Gazelle (G3). Due to the short field, there was no show pool.

Jockey John Velazquez sent Malathaat to the lead first time by and she set fractions of 23.38, 47.13, and 1:11.02 while pressed by Clairiere and stalked by Maracuja. Turning for home, Malathaat continued to lead through 1 mile in 1:36.35 but Maracuja and jockey Ricardo Santana Jr. came out 4 wide for room and outfinished Malathaat late to pull off the upset by a head in 1:49.29. It was a long 5 3/4 lengths back to Clairiere third, and 52 3/4 more to Rockpaperscissors last, who was eased in the stretch and walked off. 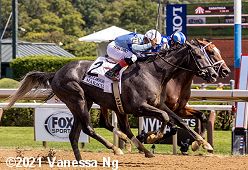 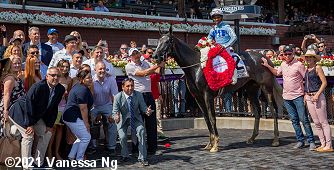 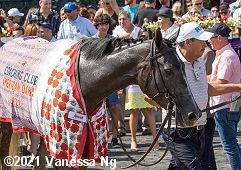 Left: Maracuja in the winner's circle. Winning trainer Rob Atras said, "She broke really sharp, which I was happy with, and she was kind of right there. They all seemed like they were coming and I thought Ricardo [Santana, Jr.] made a smart move by backing off and coming around the outside. What a race. She loves the two turns. She puts a lot into her gallops every day. The further, the better for her."

Right: Maracuja heads back to the barn after the race. Winning owner John Sakkos said, "It was nerve-racking, especially after coming in seventh in the Oaks, but it was exciting. I was just hoping we would perform better than the Oaks. She had been doing well and Rob and the team have done a phenomenal job with her. She had a good rest after the Oaks. We'll probably go to the Alabama after this." 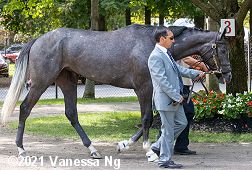 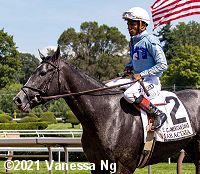 Left: Maracuja in the paddock.

Right: Maracuja returns after the race. Winning jockey Ricardo Santana Jr. said, "The trip was perfect. She broke really well today. She was running comfortably. Rob liked the filly a lot and I was happy with her. There wasn't much pressure in this race. He told me, 'Just do what you have to do' and we took the victory today. I had some pressure on the side from [Clairiere] and I just let my filly take a deep breath. As soon as I took her back out, she came rolling. She ran a great race today." 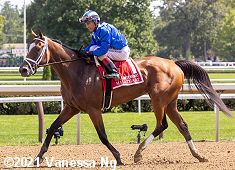 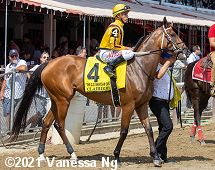 Left: Second place finisher and beaten favorite Malathaat returns after the race. Jockey John Velazquez said, "You have to play the cards you're dealt. She was doing great. She was comfortable in what she was doing, but she had to fight the whole way around and obviously set it up for somebody else. She's a great horse and you can't take that away from her."

Right: Third place finisher Clairiere heads out for the post parade. The Steve Asmussen trainee improved her record to 2 wins, 2 seconds, and 2 thirds in 7 starts, earning $497,992 for owner-breeder Stonestreet Stables. 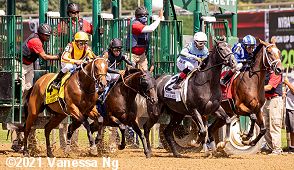 Left: The fillies break from the gate for the Coaching Club American Oaks with eventual winner Maracuja in post 2. Atras added, "Sometimes when I'm 1-to-9 I don't expect to win. It's never over until it's over and as you can see, she needed every part of the 1 1/8 to win. When they turned for home, I thought we had a shot. It looked like we were definitely going to be second but as the wire kept getting closer, she just really laid it down. [Malathaat], I didn't think we were going to get by her, to be honest. She was very good going into the [Kentucky] Oaks, she just broke a little flat footed and got shuffled back in the turn (finished 7th). She really didn't get a great trip that day and it wasn't a true showing of her. She's obviously improved a lot the past few months."

Right: Shortly after the start of the race. 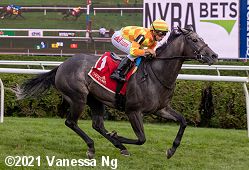 About 3 hours after the feature, a field of 6 older fillies and mares sprinted 5 1/2 furlongs over the Mellon turf course in the $200,000 Caress Stakes (G3). Goldwood Stakes winner Caravel was sent off as the even money favorite over 6-5 second choice Robin Sparkles, winner of the Mt. Vernon Stakes, and 11-2 third choice Flower Point, an allowance winner at Belmont last out. Due to an error that reported 6-1 morning line third choice Jakarta was scratched, she competed for purse money only.

Jockey Jose Ortiz sent Robin Sparkles to the lead and she set fractions of 21.64 and 44.58 while pressed by Jakarta and stalked by Caravel. Turning for home, Robin Sparkles continued to lead through 5f in 56.29 but Caravel, 3 wide for room, rallied by to win by 2 1/2 lengths over 9-1 In Good Spirits in 1:02.38. It was another 1/2 length back to Robin Sparkles third. 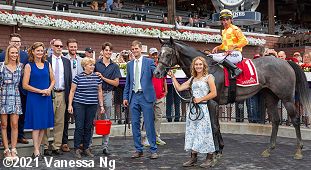 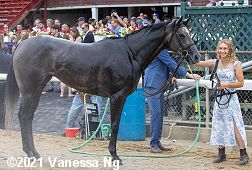 Left: Caravel in the winner's circle. Winning owner-trainer Elizabeth Merryman said, "I don't know if she's improved, but I think people understand how she needs to be ridden, and the trip is better now. I said to [Irad Ortiz, Jr.] just be as quiet as you can leaving the gate because the least twitch of the reins and she's going." Caravel will move to the barn of Graham Motion for her next start. Merryman added, "Bobby Flay now owns a majority interest in her and we made a plan when he was interested in buying to make that change. That was something I was in agreement with from the time of the sale of the majority of her. Graham is in the next barn to me at Fair Hill [Maryland]. It'll all be good. Hopefully, the goal is the Breeders' Cup Turf Sprint and Graham has so much experience going that route. It seemed like a really smart thing to do from my perspective as well. Not that I don't think I could handle it, but with the change in the ownership, Graham has a system that works great and he's been through all that. It'll be a good way to go. I'll still own part of her."

Right: Caravel gets hosed off after the race. Winning jockey Irad Ortiz Jr. said, "The whole turn, she was on the bridle waiting for the time to go. I wanted to make sure to go around the horses like she did last time at Monmouth [winning the Goldwood on June 25]. I was able to get in the clear and as soon as I asked, she gave me a really good kick – a good turn-of-foot. (Pacesetter Robin Sparkles) wasn't in my plans because there's nothing I can do against her. Either she's going to steal the race or she's going to come back to me. I just rode my filly. I was expecting she should come back to me because I have a nice filly, and if she doesn't come back, my filly will just go by her. My filly came home fast." 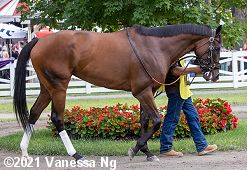 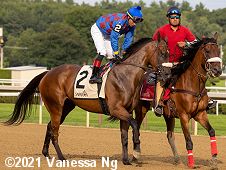 Left: Second place finisher In Good Spirits in the paddock before the race. Trainer Al Stall Jr. said, "It was a beautiful race off the bench. We missed a little time with her with a foot issue. She trained really well and I'm glad we got a piece of a Grade 3. It should set up well for the rest of the year. We're very happy. When you're dealing with foot issues, once it gets behind you, hopefully you don't have to worry about it. We're looking forward to the rest of the season."