The highlight race of opening weekend at Saratoga was the $250,000 Coaching Club American Oaks (G1), the second leg of the New York Triple Tiara for 3-year-old fillies. A short field of just 5 went 1 1/8 miles on the main track on Saturday afternoon, before 22,091 fans under sunny skies and temperatures in the 90's. Kentucky Oaks (G1) winner Plum Pretty was sent off as the 9-5 favorite off a second place finish in the Hollywood Oaks (G2) last time out. In to challenge the Bob Baffert trainee included 2-1 second choice Royal Delta, winner of the Black-Eyed Susan Stakes (G2) at Pimlico, and 4-1 third choice It's Tricky, off her win in the Acorn (G1) at Belmont.

Jockey Martin Garcia sent Plum Pretty to the lead first time past the stands and the favorite set early fractions of 23.88, 47.55, and 1:11.06 while being stalked by It's Tricky a length behind and to her outside. Entering the stretch, Plum Pretty continued to lead through 1 mile in 1:35.91, but It's Tricky moved up to challenge. The pair dueled from the 1/16 pole, but inside the final 50 yards It's Tricky pushed ahead to win by 3/4 length in 1:49.15 over the fast track. It was a long 6 1/2 lengths back to late-running Royal Delta third. 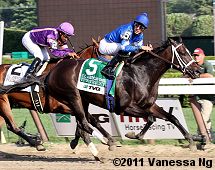 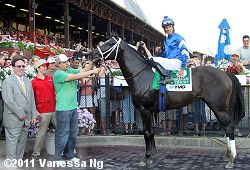 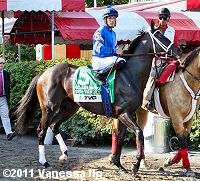 Left: It's Tricky in the winner's circle. Her trainer Kiaran McLaughlin said, "She's only had one defeat in her life. She got beat in Florida, but the winner that day, R Heat Lightning, was very impressive. We've always liked her and I thought she ran very well. She's tricky. It took us a long time to catch her in the stall this morning to put her halter on. But that's a good thing. You want to see that, because in Florida, she did everything right. We want her to be tricky. And she was tricky this morning. She won, she didn't do anything wrong in the paddock or in the race, and Eddie rode a great race. This is her third time around two turns that's she's won. We always thought that by Mineshaft, the distance should be no problem. If it's 1 1/4 miles in a month, we're not worried about the distance. It was a great win for Godolphin to win a Grade 1 here with us. We're pleased and privileged to train her for them. It was hard-fought down the lane and we got there. I told Eddie to try to get to the rail and go for the lead, but not to send her. He rode a great race. Next, probably the Alabama but we'll find out from the Godolphin people."

Right: It's Tricky heads out for the post parade. 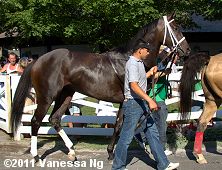 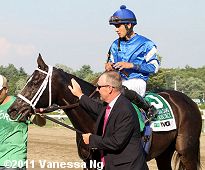 Left: It's Tricky in the paddock before the race. Her jockey Eddie Castro said, "Around the 3/8, I knew Martin (Garcia aboard Plum Pretty) had a lot of horse, too. I had to put pressure and ride her really hard. When that filly came past her, she changed leads, and when I hit her left again she swung back again, she fought again."

Right: It's Tricky gets a pat as she heads to the winner's circle. 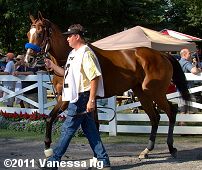 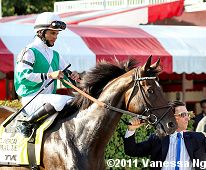 Left: Second place finisher and beaten favorite Plum Pretty in the paddock before the race. Her jockey Martin Garcia said, "My filly ran a really good race. She looked like she was going to come back, but (It's Tricky) just started running too. She broke really, really sharp so I didn't want to fight with her, I wanted to let her run her own race." Jim Barnes, assistant to trainer Bob Baffert added, "She ran her eyeballs out. It was a tough beat. Martin said she gave him everything she had."

Right: Third place finisher Royal Delta heads out for the post parade. The 2-1 second choice was unhurried early in last 4 lengths back under jockey Jose Lezcano, then passed tired horses late to get third beaten 7 1/4 lengths. The Bill Mott trainee improved her record to 3 wins and 1 third in 4 starts, earning $244,600 for owner-breeder Palides Investments N.V. Inc. 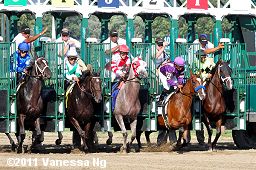 The start of the Coaching Club American Oaks with Plum Pretty going to her knees. She still took the lead a few strides later despite this bobble.