On Wednesday night the Canadian Horse Racing Hall of Fame welcomed its 2019 class at an induction ceremony and dinner held at the Mississauga Convention Centre with about 300 people in attendance. There were ten new members voted into the Hall this year, five equine and five human, plus 1 Legend inductee. This is the 43rd anniversary of the Hall of Fame which was founded in 1976.

Before the ceremonies began, arriving guests participated in a silent auction as fund raising for the Hall of Fame, followed by a live auction during dinner. After being introduced by master of ceremonies Jim Bannon (for thoroughbreds) or co-host Greg Blanchard (for standardbreds), inductees were invited on stage to be presented with Hall of Fame rings for the humans and crystal trophies for the horses. Before starting, they invited all the current Hall of Fame members in attendance to the front to be introduced and did a moment of silence for all the members who passed this year: Dr. Ted Clarke (Builder), David Cross (Thoroughbred Trainer), Bill Gale (Driver), William Graham (Thoroughbred Builder), and Gus Schickedanz (Thoroughbred Builder).

There was only one Legends inductee this year: the great Standardbred Dan Patch. The most famous pacer of the early 1900's, Dan Patch won all 73 times he raced and attracted large crowds of fans at his appearances in both the US and Canada. He competed four times in Canada in 1901, 1902, and 1905. In his final race in Canada, he broke the Canadian record for a mile on a half-mile track by three full seconds. Although the Exhibition Park track is gone, there is still a granite bench at the location engraved with the words "World Champion horse ‘Dan Patch' broke the Canadian record here in 1905." 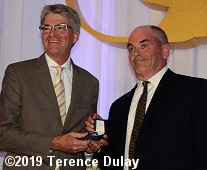 Ian Fleming was inducted in the Standardbred Builder category (right). The native of Clinton, Ontario continues to call it home, beginning as a racing secretary at Clinton Raceway and working his way up to general manager there, as well as the racing and gaming manager at nearby Western Fair Raceway. In the 1990's he created a centralized race office which still services most of the tracks in Ontario. However, he is mostly recognized for his philanthropic efforts for both his local community of Clinton and the horse racing community in Ontario. He is also well known for his outstanding sense of humor, with his deadpan one-liners laden with wisdom, such as "Before you respond count to 10. If you're drinking, count to 20." 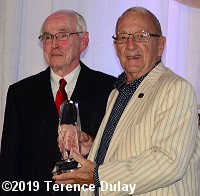 All Along was inducted in the Thoroughbred Female Horse category. In 1983, a year before the Breeders' Cup began, the 4-year-old French filly won the Prix de l'Arc de Triomphe (G1) at Longchamp in Paris under English jockey Walter Swinburn. At the time that was considered the world's most prestigious horse race. After that win, she shipped to Woodbine to win the Canadian International (G1). After just a 2 week layoff she won the Turf Classic (G1) at Aqueduct by 9 lengths, and then completed the sweep of North America's best turf races taking the Washington D.C. International (G1) at Laurel. Off that string of 4 wins she became the first filly to win the Eclipse Award as Horse of the Year. She finished her career finishing second to longshot Lashkari in the inaugural Breeders' Cup Turf (G1) at Hollywood, retiring with purse earnings of over $3 milion when she joined the broodmare band at Three Chimneys in Kentucky. Michael Veitch of the National Museum of Racing and Hall of Fame at Saratoga Springs, NY, accepted her trophy from Lou Cauz, representing the Canadian Horse Racing Hall of Fame. 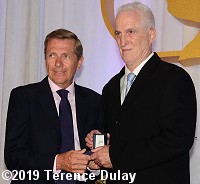 Bory Margolus was inducted in the Thoroughbred Builder category. Flying the flag of his native Alberta, he was voted Outstanding Breeder for the inaugural Sovereign Awards in 1976, following that up with Outstanding Owner honors in 1977. Margolus owned the legendary Elmbrook Farm northeast of Edmonton, winning almost every stakes race in Alberta mostly with horses bred out of his own broodmare band, including the province's most prestigious races, the Canadian Derby and the Alberta Derby. From 1972 to 1975 he won four straight renewals of the Stampede Park Futurity for juveniles. In 1977 he won his first Canadian Derby with Western Reason, but he feels the win was tainted since his horse finished 2nd and moved up to win when the stewards disqualified the first place finisher R.J.'s Diamond for interference against the 3rd place finisher Honey Speed. "I don't want to win that way especially the Canadian Derby. Its been a long time trying and now that I've won it i don't feel any happiness." Later he partnered with fellow Hall of Famer Jim Wright in the ownership of Assiniboia Downs in Winnipeg. 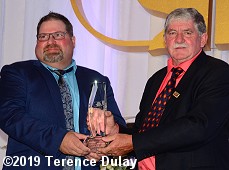 Angus Hall was inducted in the Standardbred Horse category. His trophy was accepted by Pat Woods, owber Winbak Farm's Ontario farm manager (left). Bred at Ferme Angus in Quebec, he earned over $830,000 on the track, winning 8 times and finishing in the money in all but 4 of his 26 starts. He was the first 2-year-old trotting colt to break the 1:55 barrier, clocking in 1:54 4/5 at Colonial Downs (a one-turn mile) in 1998. However, his legacy lies in his offspring. In a 20-year stallion career, 72.8% of his 1700 foals went on to race, including 6 millionaires: Peaceful Way, Majestic Son, Elusive Desire, Winning Mister, Frenchfrysnvinegar, and Laddie. In addition, his broodmares' offspring have earned over $45 million. 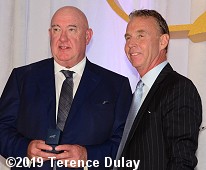 Jimmy Takter was inducted in the Standardbred Trainer category (right), as the only person to be inducted in the respective Halls of Fame of Sweden (the Nordic Trot Museum in July 2019), the United States (in Goshen, NY in 2012), and Canada. He is also the first Swedish-born horsemen to join Canada's Hall. Although most of his success came from his U.S. operations, he has won 266 out of 1375 starts in Canada, earning $34.2 million, which is over 1/4 of his total earnings. On Canadian soil he won 16 Breeders Crown races, as well as 18 Champlain Trots, 17 Simcoe Stakes, and 5 Canadian Trotting Classics. At the 2015 Breeders Crown at Woodbine, he won 6 of the 12 Crown races that night, and finished 2nd in 4 others, earning almost $2.7 million. This set an all-time Crown record by a trainer and the single greatest day in harness history for a trainer in terms of earnings. He retired from training at the end of 2018, with a record of 2154 wins in 9956 starts, earnng $129,769,939. 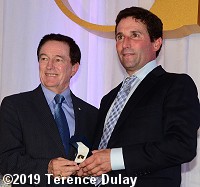 Mickey Walls was inducted in the Thoroughbred Jockey category (right), fittingly accepting his ring from fellow Hall of Famer Sandy Hawley. Walls, a native of Vancouver, BC, and son of trainer Joe Walls, began riding at the age of 16 in 1990 at Exhibition Park (now known as Hastings Park), before moving his tack east to Woodbine, taking his first Sovereign Award as outstanding apprentice that year. The following season he swept both the Apprentice and Outstanding Jockey trophies in Canada, as well as the Apprentice honor at the Eclipse Awards. His 12 years in the saddle netted him 1432 wins, 112 in stakes, including the Queen's Plate aboard Woodcarver in 1999, as well as the Prince of Wales, Breeders' Stakes, and Canadian Oaks. In 1991 he won 286 races, 221 at Woodbine which eclipsed Hawley's previous record of 190. Arguably the highlight of his career was the 1996 Breeders' Cup Classic "at home" at Woodbine, where he rode 101-1 longshot Mr. Sassafras to a 4th place finish beaten only 1/2 a length by Alphabet Soup, Louis Quatorze, and Cigar, after leading at the 1/8 pole. He retired from riding in 2002 due to weight problems, no longer able to stay under 126 pounds despite hours in the sauna and riding while dehydrated. 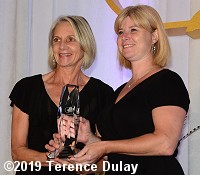 Tricky Tooshie was inducted in the Standardbred Female Horse category. The Quebec-bred started off winning at home, dominating Quebec Sires Stakes action including the $197,289 Coupe des Eleveurs at Blue Bonnets in 1992 in a track record 1:55 1/5 as a juvenile. At 3 she won 15 in a row, but with racing in Quebec suffering a downturn, after taking time off to recver from a knee injury she moved to Ontario and the barn of trainer Rick Zeron. In 1995 she won 7 of 33 starts with 8 seconds and 3 thirds for earnings of $183,000. She retired with 44 wins, 29 seconds, and 24 thirds in 142 stars, earming over $1 million, the first Canadian-sired mare to reach that milestone. She retired to Hanover Shoe Farms in Pennsylvania, where 11 of her 13 foals raced, led by The Panderosa gelding True North Hanover. She is enjoying her senior years at the Pennsylvania nursery. 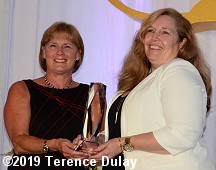 Lexie Lou was inducted in the Thoroughbred Female Horse category. Kathryn Sullivan, assistant to trainer Mark Casse accepted her trophy on behalf of owner Gary Barber. Bred by Paradox Farms she was bought and trained initially by owner John Ross, but after she finished 4th in the Star Shoot Stakes, Gary Barber purchased her for $300,000 and sent her to Casse's barn. After losing the Fury she went on to win the Wooodbine Oaks, Queen's Plate, and Wonder Where, and then shipped to California to wint he Autumn Miss (G2) before finishing second to California Chrome in the Hollywood Derby (G1) at Del Mar. At 5 she came back home to Woodbine to win the Nassau (G2) and Dance Smartly (G2). She retured with 10 wins and earnings of $1,763,538 and sold for $1 milion at Keeneland November as a broodmare to Japanese interests. 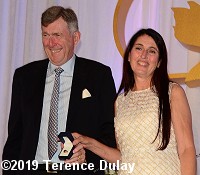 Josie Carroll in the Thoroughbred Trainer category (right) is the first female trainer to be inducted in the Hall of Fame. She is the first female trainer to won the Queen's Plate, with Edenwold in 2006, and then won her second Plate with the filly Inglorious in 2011. Unlike many horsepeople, Carroll did not come from a racing family, but instead gained an interest in the sport from reading newspaper articles, clipping these to save in a scrapbook. She enrolled in the equine studies program at Humber College located near Woodbine, and then worked under trainers Sam Dixon, Mac Benson, Roger Attfield, John Tammaro, and Mike Doyle before going out on her own when Doyle took a job with Stronach Stable. Her biggest thrill was also her biggest disappointment when Ami's Mesa was nosed out for the win in the 2017 Breeders' Cup Sprint at Del Mar. 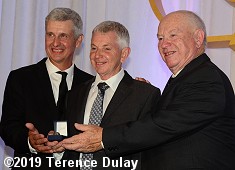 Trevor Ritchie closed out the night with his induction in the Standardbred Driver category (center). Ritchie grew up across the street from Western Fair Raceway in London, Ontario. Working weekends for trainer Peter Thibodeau at the age of 10, he eventually quit school to pursue racing full time, working under trainer Bill Herbert, who taught him how to be a horsemen. Ritchie's black and white racing colours are a salute to Herbert who also had a black and white scheme. The highlights of his career were winning the Hambletonian with Yankee Paco (the first Canadian-sired horse to do so), the Maple Leaf Trot with Peaceful Way, the Canadian Trotting Classic with Majestic Son, and the Meadowlands pace with Frugal Gourmet. Retiring from the sulky in 2014, he won 3710 out of over 25,000 races, with purse earnings of over $70 million, most of which was earned in Canada's top circuit highlighted by Mohawk (now Woodbine Mohawk Park) and former harness tracks Woodbine and Greenwood.