On Wednesday night the Canadian Horse Racing Hall of Fame welcomed its 2017 class at an induction ceremony and dinner held at the Mississauga Convention Centre with 260 people in attendance. There were ten new members voted into the Hall this year, five equine and five human, plus one Legend inductee.

Before the ceremonies began, arriving guests participated in a silent auction as fund raising for the Hall of Fame, followed by a live auction during dinner. After being introduced by master of ceremonies Jim Bannon (for thoroughbreds) or co-host Greg Blanchard (for standardbreds), inductees were invited on stage to be presented with Hall of Fame rings for the humans and crystal trophies for the horses. 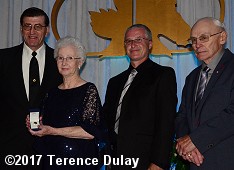 Dr. Gordon Gilbertson - Standardbred Builder. His wife Eleanor accepted the ring for the late Dr. Gilbertson. Gilbertson, an equine veterinarian from Hagersville, Ontario, designed the Rondeau Quick Hitch, eliminating the thimbles and strapping system formerly used to secure the horse to the sulky for training and racing. His invention, patented in 1980, was quickly adopted by Standardbred horsemen around the the world and is still used today. Trainer Blair Burgess has campaigned for his induction for years due to the "universality of his invention", and this year both Burgess and Gilbertson join the Hall. Daughter Nancy Gilbertson said, "He spent all his life around horses. He would have loved this, being around all these people he could talk horses with. Looking down on all of us he would have said Wonderful! Wonderful!" 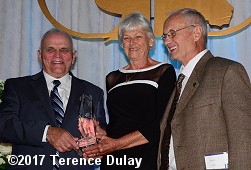 Happy Lady - Veteran Standardbred Horse. Hall of Fame driver Bill O'Donnell (left) presents the trophy to owner Linda Lockey and breeder Bill Masterson. Despite a short racing career that last ed 2 years, she amassed $528,825 in earnings, and was a near perfect 15 for 16 as a juvenile, earning Champion 2-Year-Old Pacing Filly honours on both sides of the border. She is one of only two fillies to win the Monticello OTB Classic in New York, and she set a track record 1:58 4/5 winning the Lucy Maud at Roosevelt Raceway. She died in January 1981 in a barn fire at Castleton Farms in Kentucky. Lockey said her family wanted to treat themselves to new outfits every time Happy Lady won, but "4 wins later our closets were stuffed so maybe we'll just buy a top or a scarf. 15 wins later maybe we'll just trade clothing items!" 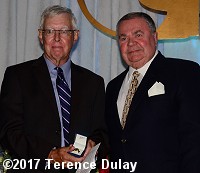 Curtis Stock - Thoroughbred Communicator. Bruce Walker, Stock's former boss at Woodbine and a fellow Hall of Fame member, (right) presents the ring to Stock. Stock dominates the Sovereign Awards in the writing categories with 11 trophies. The London, Ontario native grew up in Calgary and got his start at the Calgary Herald as a univerity student, then worked for Bruce Walker at Woodbine, son of Herald sports editor Hal Walker. He returned west to work at Northlands Park and the Edmonton Journal. Stock said, "I used to submit stories anonymously to the Calgary Herald under the nom de plume of Forward Pass. Then I found out that the staff actually got paid! So I walked in, said 'I'm Forward Pass, where's my money?' That day Hal hired me as a summer student!" 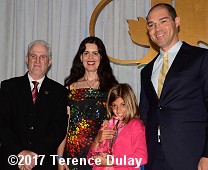 South Ocean - Veteran Thoroughbred Horse. Tom Cosgrove, chair of the Thoroughbred Nominating Committee and Woodbine's historian and archivist (left) presents the trophy to Nadina Taylor and Edward Taylor, children of late owner Charles Taylor. The daughter of Canadian Triple Crown winner New Providence defeated future Horse of the Year and Hall of Famer Fanfreluche in the 1970 Canadian Oaks and was stakes placed in the Bison City, Belle Mahone, Maple Leaf, and Fairbank Handicap. She retired with 17 in the money finishes in 22 starts with earnings of $70,147. She went on to produce Storm Bird, who went on to sire Storm Cat, who sired 180 graded stakes winners and 8 champions including Giant's Causeway and Yankee Gentleman, grandsire of Triple Crown winner American Pharoah. Her impact on the Thoroughbred breed worldwide continues. 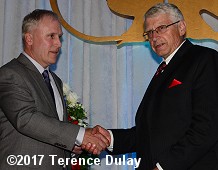 Harold J. Barroby - Thoroughbred Trainer. Richard Shields presents the ring to Harold Barroby (right), who joins his brother Frank Barroby (inducted in 2010) in the Hall of Fame as the only British Columbia-based trainers to be in the Hall. The native of Ravenscrag, Saskatchewan followed older brother Frank to Lethbridge, Alberta, and later moved to Vancouver to train for Canada West Ranches, a powerhouse in BC racing with 54 stakes winners and 180 stakes wins. Owner Jimmy Shields said there would be no Canada West Ranches if not for Barroby. On his induction night he sat just 1 win shy of the 1,700 plateau with career earnings over $17 million, and he is proud to have won every Derby in Western Canada. Barroby said, "When I see the names of some ofthe trainers I'm joining in the Hall, I'm keeping some really good company. I am especially proud to join my brother Frank." 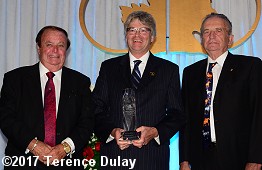 Elegantimage - Female Standardbred Horse. Jamie Martin, Vice President of the Hall of Fame as well as the Executive Vice-President of Racing at Woodbine Entertainment Group (center) presents the trophy to owner Doug Millard and breeder Harry Rutherford. With her 20 wins, 7 seconds, and 3 thirds in 41 starts earning $955,368, the daughter of Balanced Image was the champion Two-Year-Old Trotting Filly in 1996 and was 8 for 10 in Ontario Sires Stakes company as a 3-year-old. Retired to the breeding shed she produced stakes winners Elegant Serenity and Body Balance. In 2000, just 2 years after her retirement, Woodbine introduced the Elegantimage Stakes (now run at Mohawk). Owner Doug Millard said "Anytime they name a race after your horse you know she's something special." 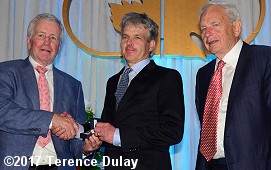 Blair Burgess - Standardbred Driver/Trainer. The "city kid" from Toronto was introduced to racing by his father who once owned Standardbred claimers. At the time of his induction he has over 1,040 wins and $27.6 million in purse earnigs, but most importantly, he has won big events on both sides of the border, with both pacers and trotters, a rarity in the sport. He has 2 wins each in the Hambletonian and Meadowlands Pace, as well as the Little Brown Jug, Kentucky Futurity, Breeders Crown, and a Trotting Triple Crown with Glidemaster in 2006. His million-dollar earners include Real Desire, Glidemaster, Tell All, Western Ideal, Amity Chef, Quality Western, and Amigo Hall. He joins his father Robert who was inducted into the Hall as a Builder in 2011. He said, "When I was still in school and I wanted to get my horse some exercise, but it was too cold or too dark so instead of jogging him I'd put him on the treadmill then go into the lunch room and fall asleep. Horse had a long good life but I can tell you he was very fit! The last couple years haven't been so much fun. I've always been a home-run, RBI kind of guy rather than hitting for average so it makes it tough. Training horses isn't for the faint of heart." 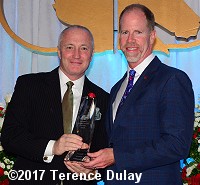 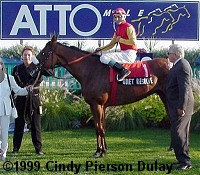 Quiet Resolve - Male Thoroughbred Horse. Hall of Fame committee member and Hill 'N' Dale Farm owner Glenn Sikura presents the trophy to Mark Samuel, chief executive officer of Sam-Son Farm. The son of Affirmed was known for his two biggest upsets, winning the 1999 Atto Mile (G1) at Woodbine via disqualification and then finishing second by a neck in the 2000 Breeders' Cup Turf (G1) at Churchill Downs, defeating the likes of Montjeu, Ciro, John's Call, and Down The Aisle. That effort earned him Horse of the Year honours in Canada that year. He retired with $2.3 million in purse earnings, winning 20 of 31 starts in a 5 year career. Samuel said, "This was a wonderful horse and I'm so thrilled and honoured that he's getting this respect, with this very deserving group (of fellow inductees)." 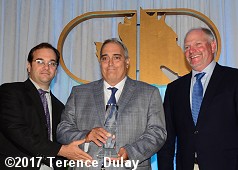 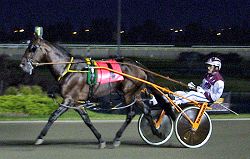 Mach Three - Male Standardbred Horse. Darryl Kaplan, chair of the Standardbred Nominating Committee and editor of Trot magazine (left), presents the trophy to Joe Muscara Jr. (center), son of late owner Joe Muscara Sr. Mach Three earned his induction into the Hall in his first ballot, joing his legendary son Somebeachsomewhere. He won the 2001 Metro Pace at Woodbine but made his name in the breeding shed, with total progeny earning of over $110 million, shuttling between Tara Hills Stud in Port Perry and Alabar Farms in New Zealand. 117 of his 1,327 offspring earned more than $200,000, and 32 that ran sub-1:50 miles. His top offspring include Somebeachsomewhere, Monkey On My Wheel, Solar Sister, Carnaes Fellow, and Auckland Reactor N. Sadly he had to be euthanized this January after a paddock accident at Alabar. 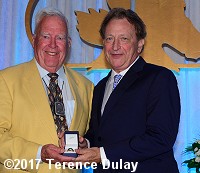 Eugene Melnyk - Thoroughbred Builder. Bill Bristow, credited for bringing him into the horse racing and breeding business, presents the ring to Eugene Melnyk (right). Toronto native Melnyk founded Biovail Corporation, a pharmaceuticals business where he made his fortune. Bill Bristow, a family friend and his stockbroker, convinced him to buy a yearling son of Silver Deputy at a Kentucky yearling sale for $125,000. That colt, Archers Bay, raced in partnership with Bill and Iris Bristow, went on to become his first Queen's Plate runner and winner. Melnyk's powerful stable, mostly trained by Todd Pletcher and Mark Casse, included champions Speightstown, Flower Alley, Roxy Gap, Marchfield, Lodge Hill, Graeme Hall, and Canada's only Triple Tiara winner Sealy Hill. Melnyk resides in Barbados and his jockey silks include the blue and gold colors of the Bajan flag. At one time he owned 500 racehorses, based out of his Winding Oaks Farm training and breeding center in Ocala, FL. He also owns the NHL Ottawa Senators, and had served as a trustee with the New York Racing Association, where he opened Anna House, a child care facility for Belmont Park backstretch workers.

Melnyk said, "I've never been (inducted into) a Hall of Fame before! To be put into the same pen as all those great jockeys, trainers, and owners, to me is a huge honour. I got into the business when my track rat Uncle Leo would tell my parents he was taking Little Gene to High Park, which ended up being Woodbine. My very first bet was on Royal Chocolate in 1973 (Queen's Plate), he cashed it for me. Years later Bill Bristow said 'I got a great business I should get you into,' and today I'm in their Hall of Fame! He could have convinced me to invest in his mining companies, but I was drawn instead to the thrill of horse racing."