The feature race on Sunday at Santa Anita was the $100,000 California Flag Handicap for California-bred or sired older horses sprinting 5 1/2 furlongs on the turf. Conditions were typical for early October with sunny skies, temperatures in the low 80's and the course rated firm. After Grinning Tiger scratched, California Dreamin' Stakes winner Galilean was sent off as the 3-2 favorite in the field of 5 off his 5th place finish in the Del Mar Mile Handicap (G2). In to challenge him included 5-2 second choice Baja Sur, second in the Green Flash Handicap (G3), and 3-1 third choice Mikes Tiznow, 4th in the Green Flash after winnin the Albany Stakes at Golden Gate.

Jockey Ricardo Gonzalez sent Mikes Tiznow to the lead out of the chute through fractions of 22.71 and 45.09 while pressed by Galilean and stalked by 7-2 fourth choice Ultimate Bango. Turning for home, Mikes Tiznow tired allowing Ultimate Bango to inherit the lead through 5f in 56.29. Jockey Umberto Rispoli moved Galilean out 4 wide for room and he rallied to win by a head in 1:02.13. It was another 1 1/4 lengths back to 19-2 longest shot Rookie Mistake third. 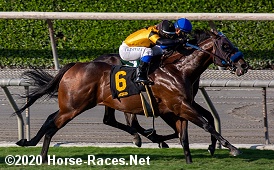 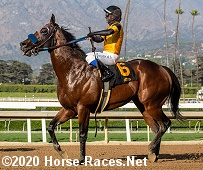 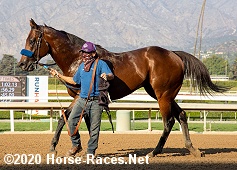 Left: Galilean in the "winner's circle". Winning trainer John Sadler said, "He's a really good horse. This is the third stakes we've won with him and he's won six overall now. He's got so much class. We changed things up today, running short, but we added blinkers and as you could see, he's got a ton of natural speed."

Right: Galilean heads back to the barn ater the race. Winning jockey Umberto Rispoli said, "I was a little bit in trouble at the top of the stretch when Baja Sur came out but then opened the gap on the inside. Unfortunately, my horse didn't want to switch leads and he was hanging in all the way. I was obligated to just ride it with him and to try to make him as straight as I can but he's a huge horse. I got it because he was the better horse in the race." 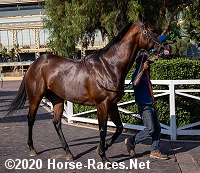 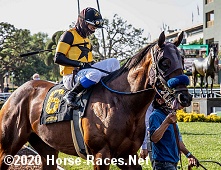 Left: Galilean in the paddock before the race. Rispoli added, "He's the kind of horse that is versatile. I think he can do dirt and grass. John is smart, he saw it wasn't the toughest race and he took a chance to place him inside. He put the blinkers on which helps. He's a tricky horse, he couldn't win it any more easily than he did today."

Right: Galilean heads out to the track. Sadler added, "Long range, it's exciting because these Uncle Mo's are doing so well at stud and that's very encouraging for him. We're excited about the new turf chute here at Santa Anita and we'll look at running him in a stake going six and half (furlongs) this winter. We'll probably stick with the state-bred program, there's just so much money there." 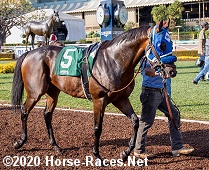 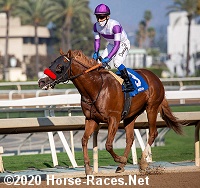