The feature race on Saturday at Santa Anita was the $100,000 California Distaff Handicap for California-bred or sired older fillies and mares sprinting 5 1/2 furlongs on the turf. Conditions were typical for early October with partly cloudy skies and temperatures in the mid 70's and the course rated firm. After 1 scratch, just 5 went to post with Just Grazed Me sent off as the 1-2 favorite, unraced since her 5th place finish in the Monrovia Stakes (G2) in May. In to challenge her included 5-1 second choice Althea Gibson, making her stakes debut off consecutive allowance wins, and 11-2 third choice Nardini, also making her stakes debut off back to back allowance wins.

Jockey Abel Cedillo sent 6-1 fourth choice Gypsy Blu to the lead through fractions of 22.67 and 45.61 while pressed by Just Grazed Me and stalked by Althea Gibson. Turning for home jockey Umberto Rispoli sent Just Grazed Me to lead through 5f in 57.04. Kept to task by Rispoli, Just Grazed Me held the lead the rest of the way to win by 3/4 length in 1:02.99. It was a nose back to late-running Nardini third. 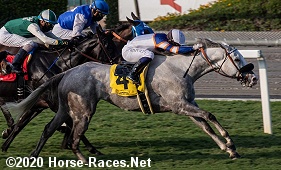 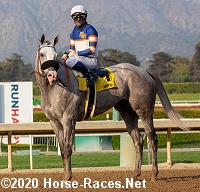 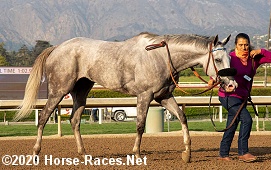 Left: Just Grazed Me in the "winner's circle". Winning owner-breeder Nick Alexander said, "She trains at Los Alamitos and I know Phil would've preferred to get a Santa Anita work into her, but the timing of the race just didn't allow it. She hadn't won in about a year and she had to work for it today. She won the same race last year and she went one second faster, so we'll give her plenty of time to recover. I had back surgery two weeks ago, but I wouldn't have missed this for the world."

Right: Just Grazed Me heads back to the barn after the race. 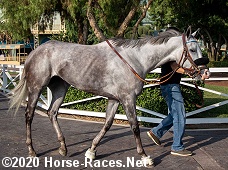 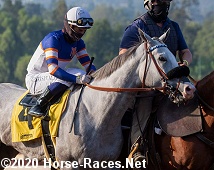 Left: Just Grazed Me in the paddock. Winning tainer Phil D'Amato said, "She's one of the barn favorites. She's my daughter Jessica's (Pyfer) favorite. She's very special. These Grazens can do anything. They make even me look good."

Right: Just Grazed Me in the post parade. Winning jockey Umberto Rispoli said, "This kind of race is always tricky because with five runners, you can expect a lot of speed or you can't expect speed at all. I knew Gypsy Blu on the outside broke slow, so I was thinking they were going to send her forward and I didn't want to be in that trap. I saw around the corner that I could track her all the way. She's just very professional. She (gave a lot of weight). She just does enough to win the race." 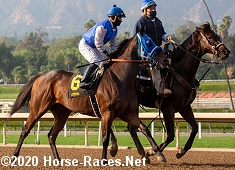 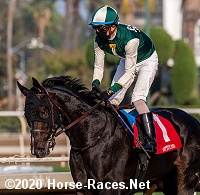