There were three graded stakes events at Belmont Park on Saturday, two on the main track and one over jumps. A crowd of just 6,116 was on hand on an overcast, damp day with temps in the mid 70's. The feature race was the $150,000 Brooklyn Handicap (G2) for older horses going 1 1/8 miles around one turn of the main track. Just five entered, with Dwyer and Haskell winner Any Given Saturday sent off at odds of 1-10 over 6-1 second choice Sightseeing, winless since the Peter Pan in May and a distant fourth in the Travers last time out.

18-1 Tasteyville was bumped after the start but once into stride, was hustled to the front by jockey Mike Luzzi and opened up a 6 length lead down the backstretch while setting fractions of 23.69, 46.12, and 1:10.24. Any Given Saturday, who broke awkwardly hitting the gate sat in second, 6 lengths ahead of the rest of the field. Entering the stretch, jockey Garrett Gomez closed the gap on the tiring pacesetter. The pair hooked up at the 3/16 pole, when Any Given Saturday easily dismissed Tasteyville, taking over the lead and drawing away to a 2 1/2 length win in 1:48.31 over the fast main track. It was just 3/4 length back from Tasteyville to late-running 25-1 Helsinki in third. It was 1 3/4 lengths more to 11-1 Awesome Twist, who finished 1/2 a length in front of Sightseeing in last. 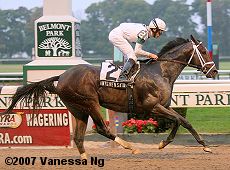 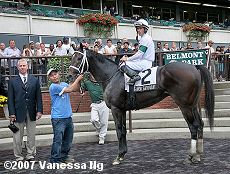 Any Given Saturday in the winner's circle. His trainer Todd Pletcher (far left) said, "Any time you are a big favorite, you just want everything to go smoothly. Garrett said that when he left the gate, there was contact between 2 or 3 horses, and that got him up on the bridle. Garrett got him back and settled him." 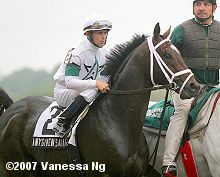 Any Given Saturday in the post parade. His jockey Garrett Gomez said, "We all got tangled (at the start). I hit the side of the gate, and my colt broke outward. It took us about four jumps to get off each other; it was kind of a tangled start. Once I got him settled back into a good rhythm, he ran a good race. He did have to overcome some things and he did have to make up some ground. He's proved he likes it (at Monmouth Park) and hopefully, he'll run the same kind of race (in the Breeders' Cup Classic)." 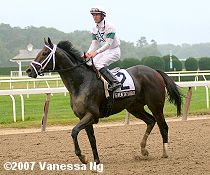 Any Given Saturday returns after the race. His trainer Todd Pletcher said, "We thought earlier in the year that he was one of the best 3-year-olds. He got a foot bruise in the Kentucky Derby, but everything else has been perfect since. It was sort of a strange race: you don't see those big gaps. He had to work a bit. We'll go from here. All in all, we're very pleased." 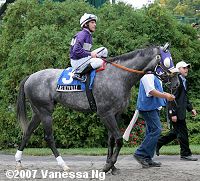 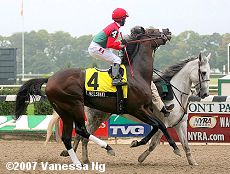 Left: Second place finisher Tasteyville leaves the paddock. His jockey Mike Luzzi said, "He's a pretty cool horse. He's a free-running horse. At Monmouth, they out-footed him early. I was impressed (today). It was a good race."

A more closely matched field of five went to post in the $150,000 Gallant Bloom Handicap (G2) for older fillies and mares sprinting 6 1/2 furlongs on the main track. Cuaba, fourth in the Classy Mirage last out, was the lukewarm 2-1 favorite over 5-2 Princess Janie, winner of the Mongo Queen at Monmouth last out. Capades winner Jazzy was the 3-1 third choice, with 7-2 Pussycat Doll and 5-1 Great Intentions completing the field.

Great Intentions battled on the pace with Pussycat Doll down the backstretch through a quarter in 22.55 and a half in 45.66, with Jazzy in stalking position third to their outside. Entering the stretch, Great Intentions faded from the fast pace allowing Pussycat Doll to inherit the lead with a furlong to go. However, Jazzy had closed the gap on the leaders and prevailed in deep stretch to win by 3/4 length over late-running Cuaba in 1:16.71. It was just 1/2 a length back to Pussycat Doll in third. 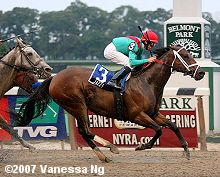 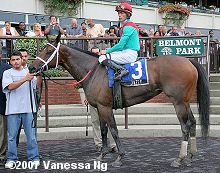 Jazzy in the winner's circle. Her trainer Mark Hennig said, "She's a neat little horse. She had trained well going into it, and I know Garrett (Gomez) had a lot of confidence off the break. She was right in the bridle and handling everything pretty good. The race didn't quite unfold the way we thought it would. Garrett thought the speed would be to the outside, but it turned out to be to his inside. She got a good trip because of it. We'll discuss things with Barry (Irwin of Team Valor). I'm sure if he's got an opportunity and she's worthy, we'll take a look at the Breeders' Cup Filly & Mare Sprint." 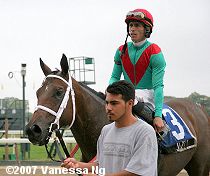 Jazzy returns after the race. Her jockey Garrett Gomez said, "She broke good and sat in the garden spot. I wanted to give her a chance to see if she would take to the dirt. Mark seemed to think so as she had trained well over it. She finished up strong enough to get there. It was a good effort first time on the dirt." 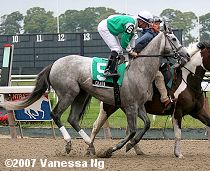 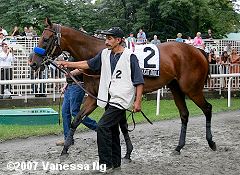 Left: Second place finisher Cuaba in the post parade. Her trainer Bill Mott said, "She was off the pace a little today and finished willingly. I don't know where she will go next."

Her jockey Kent Desormeaux said, "She ran her race today. We were happy with the effort. She performed much better (than last time)."

The first race on Saturday afternoon was the $150,000 Lonesome Glory Hurdle Stakes (G1) for 4-year-olds and older going 2 1/2 miles over National fences. A field of nine assembled in this major prep for the Breeders' Cup Steeplechase to be run October 20 at Far Hills, with Mixed Up sent off as the 5-2 favorite over 3-1 second choice Good Night Shirt.

8-1 Preemptive Strike opened up a 6 length lead after the first mile while 7-1 Sweet Shani raced in second most of the way. However, the two pacesetters tired after nine fences, as Good Night Shirt, who had stalked them in fourth the whole way, came out three wide on the far turn after stumbling on the final jump to take over the lead at the 3/16 pole. Good Night Shirt was all out to hold off the late closing kick of 5-1 Orison to win by a length in 4:42.45 over the firm turf course. It was another 3 lengths back to Preemptive Strike in third. Favorite Mixed Up raced in sixth early and showed no rally late, finishing fifth. 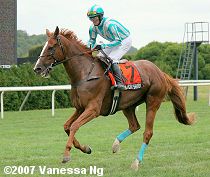 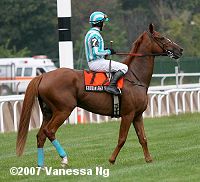 Good Night Shirt heads to the start. His trainer Jack Fisher said, "I didn't expect him to run this well today. I thought he would run well in the Breeders' Cup, that's more his course. I thought he was probably placed were he should have been in the race. He kind of dove at the last fence. He didn't jump that one particularly well. I was glad that Willy stayed on." 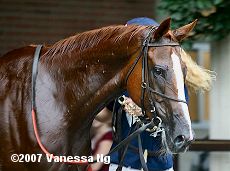 Good Night Shirt returns to the barn after the race. His jockey William Dowling said, "He was fine except for the first and last jumps. The first jump he jumped too soon because he was running off. That last one was my fault; I wanted to go short to make sure I got over it and we had a bit of miscommunication. It was 50-50 whether I was going to stay on or not. Luckily, he's such a big horse, I was able to stay on. He's a class horse and he's only a 6-year-old." 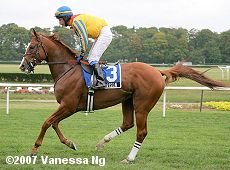 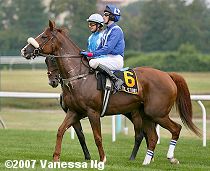 Left: Second place finisher Orisin warms up before the race.

Right: Third place finisher Preemptive Strike heads to the start of the race.