There were two Grade 2 stakes races run at Saratoga on Sunday afternoon under sunny skies with temperatures in the low 80's, the main track fast and the turf courses firm.

The first of these was the $250,000 Bowling Green Stakes (G2) for older horses going 1 3/8 miles around three turns of the inner turf course. After Cibolian scratched, a short field of five went to post with Rockemperor sent off as the 2-1 favorite, winless since the Joe Hirsch Turf Classic Invitational (G1) in October and fifth in the Manhattan (G1) last out. In to challenge him included 5-2 second choice Highland Chief, 4th in the Manhattan after winning the Man O'War (G1), and 3-1 third choice Arklow, unraced since 5th in the Joe Hirsch Turf Classic. 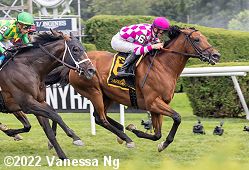 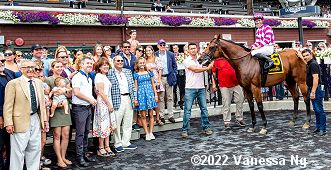 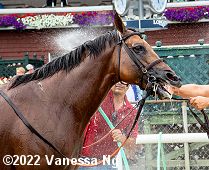 Left: Rockemperor in the winner's circle. Winning trainer Chad Brown said, "He'd been working really well. The key to this horse is getting him on firm turf like today. He had a really good trip today and I was really pleased with the way it worked out. Flavien did a great job. We had a plan and it pretty much went exactly the way we thought.

Right: Rockemperor gets hosed off after the race. Winning jockey Flavien Prat said, "Going into the first turn, everybody kind of went so it worked out well and I got myself towards the inside, then I was traveling well all the way around. I was pleased where I was and when I tipped him out, he gave me a good kick." 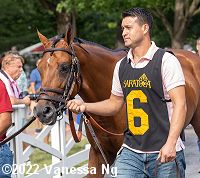 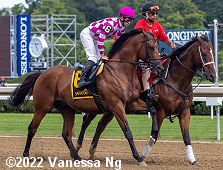 Left: Rockemperor heads into the paddock before the race. Brown added, "He's getting up there in age but he's starting to round back into form. I think the key is getting into the fall and getting the firmer ground is going to be a little more challenging. We'll keep every option open and see where he takes us. It was a really memorable win. A lot of the partners were here today and that's really what Saratoga is all about – a day with good weather and a lot of the partners are here. It made for a great memory. A lot of pictures will be ordered on this one."

Right: Rockemperor in the post parade. Prat added, "(Going longer is) probably true. I think he needs firm turf. He needs distance, but he showed up today and that's what mattered." 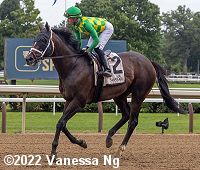 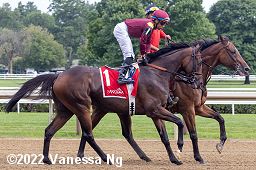 Left: Second place finisher Arklow returns after the race. Trainer Brad Cox said, "I thought he was ready to run today and he was; came up a little bit short. We didn't really have a clean run down the lane, but overall, this was a step towards [the Kentucky Turf Cup] and we're going to hopefully be competitive for the race he always shows up [in]. I think he wins [with a cleaner trip]. I think he's right there – he was right there – but he makes it very, very interesting if he gets a clean run down the lane."

Right: Third place finisher L'Imperator in the post parade. Trainer Chad Brown said, "Manny [Franco] rode a great race and almost pulled it off. We talked about using him a bit early and then then backing it up down the backside and he did it beautifully."


The $200,000 Amsterdam Stakes (G2) featured a field of 9 three-year-olds sprinting 6 1/2 furlongs on the main track. Undefeated champion 2-year-old Corniche was sent off as the 8-5 favorite, unraced since winning the American Pharoah (G1) and Breeders' Cup Juvenile (G1). In to challenge him included 3-1 second choice Accretive, a debut winner at Belmont by 5 3/4 lengths on June 26, and 5-1 third choice Pinehurst, winner of the Saudi Derby (G3) before disappointing last of 16 in the UAE Derby (G2).

Jockey Flavien Prat sent Pinehurst to the lead out of the chute after stumbling at the start, through fractions of 21.78 and 44.60 while pressed by 15-2 Gunite and stalked by Corniche and Accretive. Into the stretch, Pinehurst tired badly allowing Gunite to inherit the lead through 3/4 in 1:09.35. Accretive closed well 4 wide but Gunite held him off to win by a neck in 1:15.75. It was another 4 1/4 lengths back to 56-1 longest shot Runninsonofagun third, while favorite Corniche was eased in the stretch finishing last beaten 33 1/4 lengths. 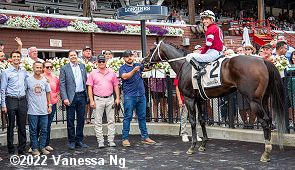 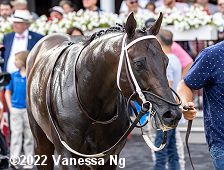 Left: Gunite in the winner's circle. Winning owner-breeder Ron Winchell said, "It's just nice to come back to where he won his Grade 1 last year and have another win in a Grade 2. He was training great. He was training like he wanted to go on from his 2-year-old year and do exactly what he did. Sometimes, you never know if they move on and continue to win graded stakes, but he got it done today." Winning trainer Steve Asmussen added, "If anything, he's a little lazy. He's a very laid-back horse, even in company. You peddle on him a little bit and like last year's Hopeful really showed it. In the Saratoga Special when he was second, he was off the bridle early and still stayed on really well. I think that he was a little sharper back in the Hopeful and carried a lot further."

Right: Gunite heads back to the barn. Winning jockey Tyler Gaffalione said, "He showed in the past that he likes to fight. Last time, he snuck up the rail and had a duel all the way to the wire. Today wasn't any different. He likes the competition. I would say he was a little more focused today and on his game. He broke more alert and put himself in the race a little bit better. I think it's going to set him up nicely, Steve said he's much bigger and stronger this year and from the two races I've seen, he just keeps improving." 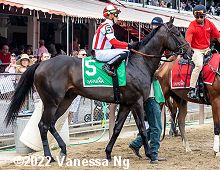 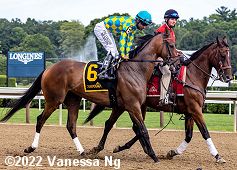 Left: Second place finisher Accretive heads out to the track. Jockey Irad Ortiz Jr. said, "My horse ran a huge race. It's a big jump up and a huge improvement."

Right: Third place finisher Runninsonofagun in the post parade. The John Toscano Jr. trainee improved his record to 3 wins, 1 second, and 3 thirds in 8 starts, earning $173,700 for owner The Estate of Scott Zimmerman. 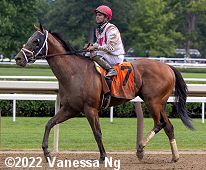 Last place finisher and beaten favorite Corniche returns after the race. Jockey Luis Saez said, "He broke good and was in a good position. He was right there. He probably needed the race."