With the conclusion of the 2013 Saratoga meeting, New York racing returned to Belmont Park on Long Island. The highlight race on opening weekend of the Fall Championship Meeting is the $250,000 Bowling Green Handicap (G2). Just 6549 fans were on hand under sunny skies and temperatures in the low 80's. A short field of 6 older horses contested this 1 1/4 mile trip over the inner turf course, with Monmouth Stakes (G2) and Man O'War Stakes (G1) winner Boisterous sent off as the 3-4 favorite off a disappointing 8th in the Sword Dancer (G1). In to challenge him included 3-1 second choice Hyper, winner of the John's Call Handicap after finishing second in the Colonial Turf Cup (G2), and 11-2 third choice Finnegans Wake, fourth in his last 3 starts including the Arlington Million (G1). 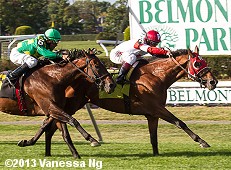 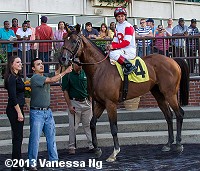 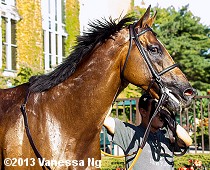 Left: Hyper in the winner's circle. Cherie DeVaux, assistant to trainer Chad Brown said, "He's always trained well. Chad has had him for so long, and he's always been a nice horse to train. He always tries really hard, he always looks great. With age, he has been getting better. What's so enjoyable about watching him run is that he seems to get better every time. He always finds a way to find a little more, and as he's gotten older he keeps finding ways to step up."

Right: Hyper heads back to the barn after the race. 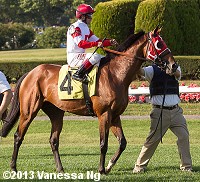 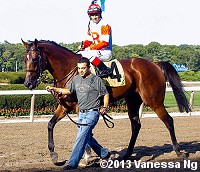 Left: Hyper behind the starting gate.

Right: Hyper returns after the race. Jockey Javier Castellano said, "My horse didn't break too sharp today, for whatever reason. My goal in my mind was to keep him relaxed the first part of the race and then find the kick. When Boisterous and my horse made their moves at the same time, at the 1/4 pole, Johnny (Velazquez aboard Boisterous) didn't have a choice, he had to go inside. I had a choice, to go around horses. My horse took off and did it the right way. He hung a little bit but when he saw the other horse come on the outside, he came on again." 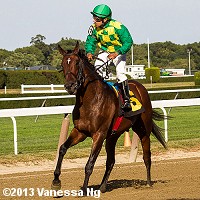 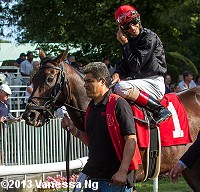 Left: Second place finisher Finnegans Wake returns after the race. The 11-2 third choice was last 6 lengths off the pace under jockey Cornelio Velasquez, then rallied but just missed. The Dale Romans trainee improved his record to 2 wins, 2 seconds, and 3 thirds in 16 starts, earning $463,277 for owner-breeder Donegal Racing (Jerry Crawford).

Right: Third place finisher and beaten favorite Boisterous in the paddock before the race. Trainer Shug McGaughey said, "He got stopped at a bad time in the race, then he had to check him again. When he got him to the outside, he came on and finished. It's just one of those things." Jockey John Velazquez added, "It was way open (at the top of the stretch), for two horses at least."