With the conclusion of the 2012 Saratoga meeting, New York racing returned to Belmont Park on Long Island. The highlight race on opening weekend of the Fall Championship Meeting is the $200,000 Bowling Green Handicap (G2). Just 4598 fans were on hand despite free admission, under overcast skies with intermittent showers and temperatures in the low 80's. A short field of 5 older horses contested this 1 1/4 mile trip over the inner turf course, with United Nations Stakes (G1) runner-up Air Support sent off as the 7-5 favorite off a third place finish in an allowance last out. In to challenge him included 5-2 second choice Brilliant Speed off a third place effort in the Sword Dancer (G1), and 11-4 third choice Newsdad, fourth in both the Man O'War (G1) and Sword Dancer.

8-1 longest shot Bombaguia went to the lead first time by and set slow fractions of 26.06, 50.55, and 1:14.90 while pressed by Newsdad to his outside, with favorite Air Support stalking the lead pair in third another 1 1/2 lengths back. Entering the stretch, Newsdad tired and dropped back to last as Bombaguia opened up a 2 length lead through 1 mile in 1:39.91. Air Support steadily gained on the pacesetter, picking up the pace in the final furlong to win by a head in 2:06.12 over the good inner turf course. It was a long 7 1/4 lengths back to late-running Brilliant Speed third. 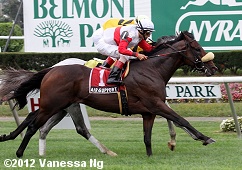 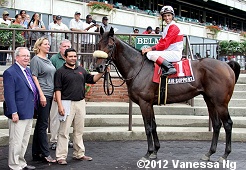 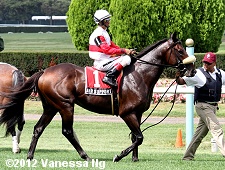 Left: Air Support in the winner's circle with trainer Shug McGaughey on the far left. McGaughey said, "I knew it would be a walking race. Johnny said he ran a little spotty. At the 3/8 pole, he said, 'I'm just gliding along, I got this under control' and when he pulled (Air Support) out, he started looking around. When he got up to the horse on the lead – let's give (Bombaguia) some credit, he was on an easy lead and we had to run and catch him, he ran a great race – when we got next to him, he didn't want to run by him when I thought we would. I'm glad he won. I thought he ran a good race. I'm pleased with him. It's the first race he's won in a while. The field was pretty decent for a five-horse field; he beat Brilliant Speed, and the runner-up was on an easy lead. I haven't discounted the Breeders' Cup, either. I just have to wait and see." 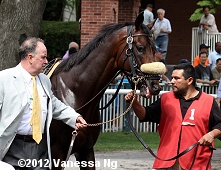 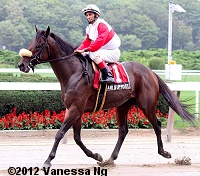 Left: Air Support in the paddock before the race. Winning jockey John Velazquez said, "My horse was going really easy the whole way. I pulled him out at the 1/4 pole, (Bombaguia) opened up 2 lengths on him, and he forgot he was running. When Prado (aboard Bombaguia) started coming out to me, that's when he started getting serious and trying to get competitive. Still, he got next to the other horse and he didn't really put up too much of a fight. I think he's better than that. It's funny, because I've been looking all the way back at the way he wins and he always wins by (a small margin). It's my first time riding him, so I didn't know him very much, but he surprised me that he got to the 1/4 pole and all of a sudden he was up in the air. Behind the horses, I'm thinking 'Oh, he's going to win easy.' Pull him out, 'Oh, I guess not.' Big surprise! He's definitely competitive; he just needs to put everything together on his way though, maybe little blinkers just to make him focus on what he needs to do. He's behind horses, he's a different horse. You put him outside of the horses, he forgets that he's running." 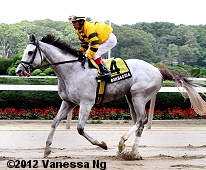 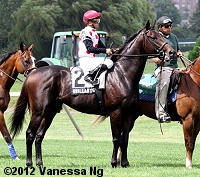 Left: Second place finisher Bombaguia returns after the race. The 8-1 longest shot set the pace under jockey Edgar Prado but was caught late. The John Kimmel trainee improved his record to 3 wins, 2 seconds, and 3 thirds in 18 starts, earning $427,640 for owner GoldMark Farm. 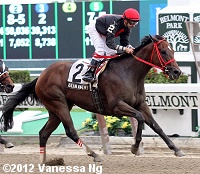 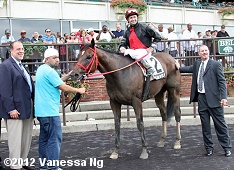 Immediately after the Bowling Green, a field of just four older horses sprinted 6 furlongs on the main track in the $80,000 Affiliate Stakes. 5-2 third choice Crossbow battled for the lead with 7-5 favorite Royal Currier down the backstretch through fractions of 22.06 and 45.39, while 2 lengths in front of 8-5 second choice Sean Avery stalking them third. Royal Currier gained a short lead in mid-stretch through 5/8 in 57.87 before tiring. Sean Avery gained the lead and drew off to win by 2 1/4 lengths over 7-1 longest shot Zero Rate Policy in 1:11.46 over the fast track. Royal Currier was just a nose back in third.

A year ago, Sean Avery won the Alfred Vanderbilt Handicap (G1) and was sidelined by a bowed tendon just a week later, leaving his future career in doubt. He had a similar injury that caused him to miss the entire 2010 season, but he came back strong in 2011 to win four of five starts including the Vanderbilt. Obviously he has recovered well and will hopefully have a successful campaign for the rest of this year.