There were two Grade 3 stakes over the Tapeta main track at Woodbine on Saturday, headlined by the $150,000 Bold Venture Stakes (G3) for older horses sprinting 6 1/2 furlongs. Conditions were excellent in Southern Ontario on the second Saturday in August, with partly cloudy skies and a post time temperature of 25C (77F), with the turf course rated firm (GoingStick 11.4). Woodstock Stakes winner Nobals was sent off as the 4-1 favorite in the field of 13 off a disappointing sixth place finish in the Quick Call Stakes (G3) at Saratoga. In to challenge him included 11-2 second choice Avie's Flatter, winner of the Nearctic (G2) in October but disappointing 9th in an allowance on July 3, and 6-1 third choice Outadore, second in the Karl Boyes Stakes at Presque Isle last out.

Jockey Rafael Hernandez sent favorite Nobals to the lead out of the chute through fractions of 22.70 and 45.50 while pressed by 15-1 Roaring Forties and stalkes by Outadore. Into the lane Nobals tired as Roaring Forties inherited the lead at the 3/16. 10-1 Secret Reserve, 5th early under Eswan Flores, moved up to take the lead inside the 1/8 pole through 3/4 in 1:09.91. 11-1 Candy Overload, last early, put in a strong rally on the far outside but Secret Reserve held him off to win by 1/2 a length in 1:16.19. It was a head back to Avie's Flatter third. 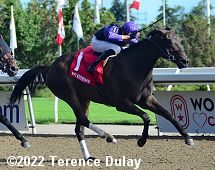 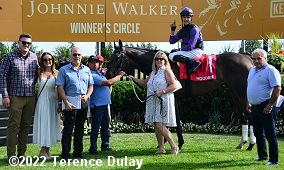 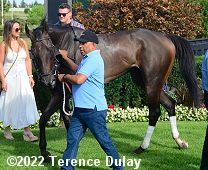 Left: Secret Reserve in the winner's circle. Winning trainer Mike Mattine said, "Last time, in the Ontario Jockey Club, he was stuck on the rail, couldn't get out, and just got beat. Today, I told Eswan, at some point, to try and get off the rail and just sit a few lengths out of it, and he rode a perfect race. So far so good."

Right: Secret Reserve heads back to the barn after the race. 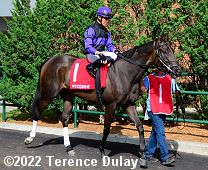 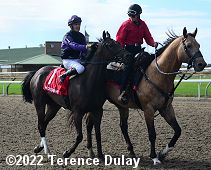 Left: Secret Reserve heads out to the track before the race. Winning jockey Eswan Flores, celebrating his first stakes win at Woodbine said, "It's a good feeling. Mike and I talked before the race. We thought there was speed in the race, so we tried to use that to our advantage, to make a good move at the end." 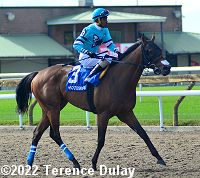 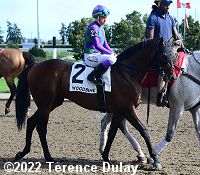 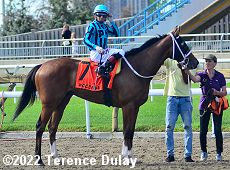 Twelfth place finisher and beaten favorite Nobals returns after the race. The Larry Rivelli trainee has a record of 6 wins, 1 second, and 0 thirds in 11 starts, earning $416,049 for owner Patricia's Hope LLC.

Kicking off the Saturday stakes action, the $150,000 Trillium Stakes (G3) featured a field of 12 older fillies and mares going 1 1/16 miles on the Tapeta. Lady Speightspeare was sent off as the even-money favorite off her dead-heat win in the Nassau Stakes (G2) on the turf. In to challenge her included 7-2 second choice Dreaming of Drew, seventh in the Nassau after winning the Belle Mahone, and 9-1 third choice Talbeyah, seventh in the Dominion Day (G3) last out.

Jockey gary Boulanger sent 22-1 Lovely Ride to the lead first time by and she set fractions of 24.12 and 50.59 while pressed by Dreaming of Drew and stalked by 21-1 Dreidel. On the far turn Lovely Ride tired allowing Dreaming of Drew to inherit the lead through 3/4 in 1:16.32. Into the lane, favorite Lady Speightspeare, fourth early under regular rider Emma-Jayne Wilson, swept to the lead through 1 mile in 1:39.43. Kept to task by Wilson, Lady Speightspeare pulled away to win by 1 1/4 lengths over Dreaming of Drew in 1:45.75. It was another 3 lengths back to 23-1 Kate's Kingdom third. 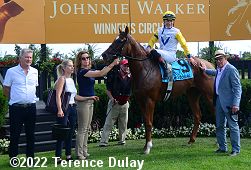 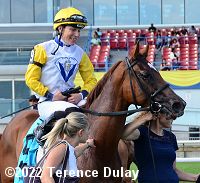 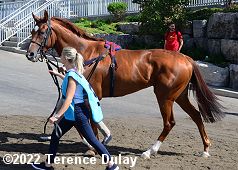 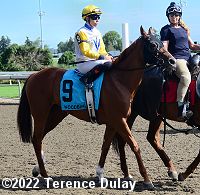 Left: Lady Speightspeare walks over before the race. Winning trainer Roger Attfield said, "The next race on the turf was 1 1/8 and we always questioned whether that might be a little far for her, and the timing of this race worked out very well. She ran on (synthetic) once last year and was very effective on it, one of her better races numbers-wise. She's trained beautifully for this race so I was very confident. She's a handful to train but she's maturing. She's just all heart. She really is a tough filly."

Right: Lady Speightspeare in the post parade. "Wilson added, I just looked to try and get her to settle, and she did. She knew it was a bit different, but she was primed and ready. She gave a big effort yet again." 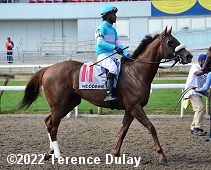 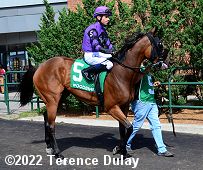 Right: Third place finisher Kate's Kingdom heads out to the track before the race. The Armando De La Cerda trainee improved her record to 3 wins, 5 seconds, and 2 thirds in 16 starts, earning $130,892 for owner Stephen Screnci.

The horses break from the gate for the Trillium Stakes.