The feature race on the second Sunday of Del Mar's Bing Crosby Season was the $100,000 Bob Hope Stakes (G3) for two-year-olds sprinting 7 furlongs on the main track. Conditions were excellent with sunny skies and temperatures in the low 80's for the 3,058 fans in attendance at the seaside oval. Only 5 made final entry but after Graduation Stakes winner Rock N Rye was scratched, just 4 went to post with Messier sent off as the 6-5 favorite off his 6 1/2 length maiden win at second asking at Santa Anita on October 22. In to challenge him were 8-5 second choice Winning Map off his debut win at Santa Anita, 4-1 third choice Kamui off his maiden win at second asking at Los Alamitos, and 5-1 longest shot Forbidden Kingdom, third in the Speakeasy Stakes on the Santa Anita turf after winning his debut at Del Mar.

Jockey Juan Hernandez sent Forbidden Kingdom to the lead exiting the chute through fractions of 21.40 and 43.23 while pressed by Winning Map and stalked by Messier. Turning for home, Forbidden Kingdom continued to lead through 3/4 in 1:09.22. Messier, 4 wide into the lane under Flavien Prat, rallied by at the 1/16 pole to win going away by 3 1/2 lengths in 1:22.74. It was another 1 3/4 lengths back to Winning Map third, and 4 1/2 more to Kamui last. 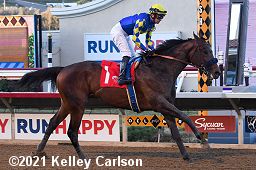 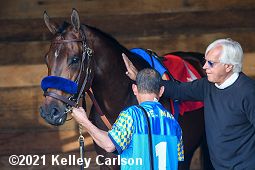 Left: Messier in the winner's circle. Winning trainer Bob Baffert said, "Messier shipped down this morning. He didn't train here during the summer and had never been here. First time on a trailer, first time he'd seen Del Mar and he walked into the paddock like he owned it. The track is pretty glib so the fractions were fast. In the summer, 21 and four wouldn't hold up, but this time speed carries and they were rolling."

Right: Messier in the paddock before the race. Winning jockey Flavien Prat said, "We were in a good spot. There was plenty of pace in the race and that was to our advantage. When I asked, he was there. And I think this horse will be fine with running on." 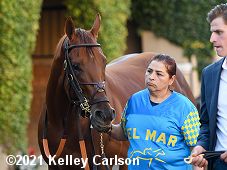 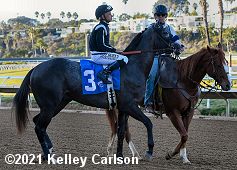 Left: Second place finisher Forbidden Kingdom in the paddock before the race. The Richard Mandella trainee improved his record to 1 win, 1 second, and 1 third in 3 starts, earning $74,000 for owners MyRacehorse and Spendthrift Farm.