The feature race on the third Sunday of Del Mar's Bing Crosby Season was the $100,000 Bob Hope Stakes (G3) for two-year-olds sprinting 7 furlongs on the main track. Conditions were excellent with sunny skies and temperatures in the low 70's at the seaside oval. Del Mar Futurity (G1) runner-up and American Pharoah (G1) third place finisher Spielberg was sent off as the 3-5 favorite in the field of 6 off his maiden win on November 1. In to challenge him included 4-1 second choice Weston, winner of the Best Pal (G2) but 3rd in the Del Mar Futurity, and 9-2 third choice Uncle Boogie, 2nd in allowance company last out.

Jockey Drayden Van Dyke sent Weston to the lead exiting the chute and he set fractions of 22.73 and 45.34 while pressed by Spielberg and stalked by 10-1 Red Flag and 25-1 longest shot Coastal Kid. Turning for home Weston and Spielberg tired as Red Flag easily inherited the lead through 3/4 in 1:10.36. Kept to task by Victor Espinoza, Red Flag drew off to win by 7 1/4 lengths in 1:23.56. It was another length back to late-running 9-1 Ambivalent third, and 1 1/4 more to favorite Spielberg fourth. 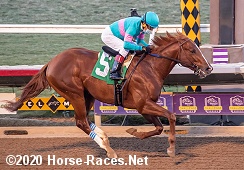 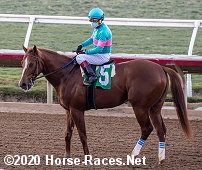 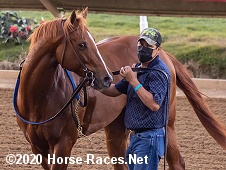 Left: Red Flag in the "winner's circle". Winning trainer John Shirreffs said, "I didn't really expect that kind of performance. I was hoping to get a placing. He broke his maiden from way off the pace and he's been doing better and better in the mornings, but he's not a brilliant work horse. So this was a pleasant surprise. You always hope but you never know. He's gone from 5 1/2 furlongs to seven, so it looks like he'll be able to go longer. It's special because (owners) Mr. and Mrs. Moss were here today and got to see him run."

Right: Red Flag heads back to the barn after the race. 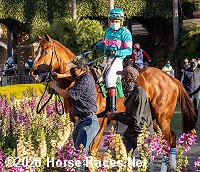 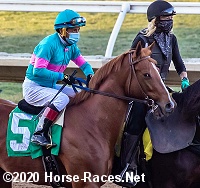 Left: Red Flag in the paddock before the race.

Right: Red Flag in the post parade. Winning jockey Victor Espinoza said, "John said 'You know him, go ahead and see what you can do with him.' He broke running and he wanted to go. He seemed to be more professional today than last time. He's still a baby and he was fooling around before. Be he was good today and did all the right things. He'll go farther, for sure. With the way he ran today, why not?" 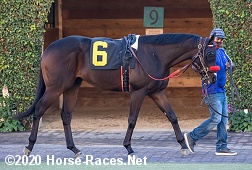 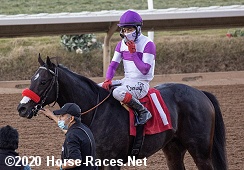 Left: Second place finisher Uncle Boogie in the paddock before the race. The Andrew Lerner trainee improved his record to 1 win and 2 seconds in 3 starts, earning $39,650 for owner Eric Homme. 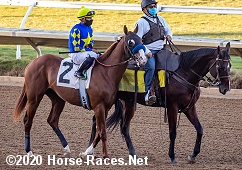