The feature race on the second Saturday of Del Mar's Bing Crosby Season was the $100,000 Bob Hope Stakes (G3) for two-year-olds sprinting 7 furlongs on the main track. Conditions were excellent with sunny skies and temperatures in the low 70's at the seaside oval. After 2 scratches, a field of just 4 went to post with Strongconstitution sent off as the 9-10 favorite off his close second in the Sunny Slope Stakes after winning his debut. In to challenge him included even-money second choice High Velocity off his debut win at Santa Anita, 7-1 third choice Rager, a debut winner last out over the Santa Anita turf, and 22-1 longest shot Zimba Warrior, 3rd in the Sunny Slope last out. Due to the short field, show wagering was not available.

Jockey Drayden Van Dyke sent High Velocity to the lead exiting the chute and he set fractions of 23.28 and 46.60 while pressed by Strongconstitution and stalked by Rager. Entering the stretch, the pace duel continued through 3/4 in 1:10.70. However, in the final 1/16 High Velocity pulled away to win by 1 1/4 lengths in 1:23.16. It was another 4 1/2 lengths back to Zimba Warrior third, and 8 1/2 more to Rager last. 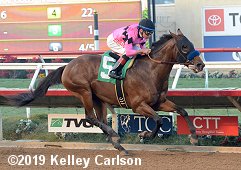 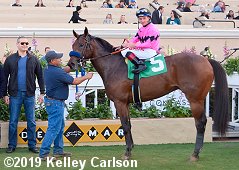 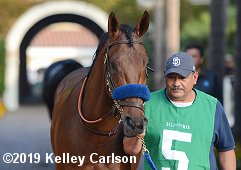 Left: High Velocity in the winner's circle. Winning trainer Bob Baffert said, "He handled everything well for his second out. It's always a tough test after you break a maiden and he didn't have a lot of time between races. But the way he worked we thought he would run well. I liked the way that when (Strongconstitution) came to him he dug in and took off again. And that's a nice horse that ran second."

Right: High Velocity in the paddock before the race. Winning jockey Drayden Van Dyke said, "I was loaded all the way. He's a fast horse, I knew that; I broke him out of the gate the other morning. I got away with some pretty easy fractions here, so I was feeling good about that. I told Bob (trainer Bob Baffert) that he was just hitting his best stride as we went past the wire. He's a nice one." 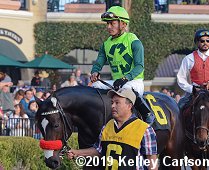 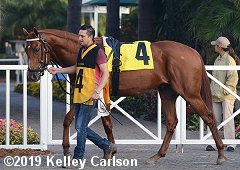 Left: Second place finisher and beaten favorite Strongconstitution heads out to the track. Jockey Abel Cedillo said, "I had to go after him; I couldn't wait. He (the winner) and I figured as the two horses in the race. So I couldn't let him get away. At the three-eighths (pole) I thought I had the horse (to win). But he just got a little tired at the end."

Right: Third place finisher Zimba Warrior in the paddock before the race. Jockey Jose Valdivia Jr. said, "He gave it a good try."