The feature race on the second Saturday of the Bing Crosby fall meeting at Del Mar is the $100,000 Bob Hope Stakes (formerly known as the Hollywood Prevue) for two-year-olds sprinting 7 furlongs on the main track. Conditions were excellent with cloudy skies and temperatures in the mid 60's. Mastery was sent off as the 3-10 favorite in the short field of five, off his debut win at Santa Anita on October 22 by 4 1/4 lengths. In to challenge him included 3-1 second choice California Diamond, winner of 3 straight, all in stakes including the Golden State Juvenile on the Breeders' Cup Saturday undercard, and 11-1 third choice Ann Arbor Eddie, a debut winner last out at Santa Anita on October 29.

Jockey Mike Smith sent Mastery to the lead exiting the chute and he set fractions of 23.23 and 47.07 while pressed by 21-1 Bernin Sensation and stalked by Ann Arbor Eddie. Entering the stretch, Bernin Sensation tired as Mastery continued to lead through 3/4 in 1:11.71. California Diamond, 4th early, put in a 3 wide rally but Mastery cruised to a 1 1/4 length win in 1:23.32 over the fast main track. It was another 1 1/2 lengths back to Ann Arbor Eddie third. 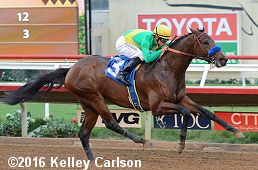 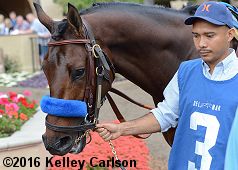 Left: Mastery in the winner's circle. Winning trainer Bob Baffert said, "We knew he was a nice horse when he broke his maiden, but from what we saw today he could be something. The second out is so important. They can run well in the first outing and then take a step back. We didn't have him super cranked for the first out and this one was a lot of him (talent). He just shipped down this morning and he shipped well. Now's he's got that experience. He didn't look exhausted afterwards but he didn't really have to exert himself."

Right: Mastery in the paddock before the race. Winning jockey Mike Smith said, "It went well after we got away from there. He was a little funny in the gate; had some of those second-race jiggers. But once we got rolling he was fine. He's got a beautiful stride -- big, long and powerful. He'll go two turns, too. These 7/8 races can be tougher than a two-turner. He handled this race fine. I think two turns will be fine, too." 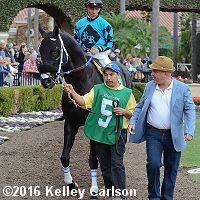 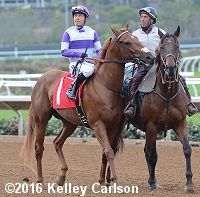 Left: Second place finisher California Diamond in the paddock before the race. Jockey Norberto Arroyo Jr. said, "He tried; he tried hard. All credit to both horses."