There were three listed stakes races on the second Sunday of the Santa Anita winter-spring meeting. Conditions were excellent with a firm course, sunny skies, and temperatures in the mid 60's for the 7,811 fans in attendance. The $100,000 Blue Norther Stakes featured 3-year-old fillies going 1 mile on the turf. After 1 scratch, Breeders' Cup Juvenile Fillies Turf (G1) 8th place finisher Helens Well was sent off as the 11-10 favorite in the field of 6 off her close 4th in the Jimmy Durante Stakes (G3). In to challenge her included 5-2 second choice Bellabel, winner of the Naas Business Club Nursery Handicap at Naas in Ireland, and 9-2 third choice Shoppingforpharoah, 7th in the Golden Gate Debutante last out.

Jockey Ricardo Gonzalez sent Shoppingforpharoah to the lead first time by and she set fractions of 24.71, 49.27, and 1:13.67 while pressed by Helens Well and stalked by 13-1 longest shot Fortunata Tensio. Turning for home, Bellabel, 4th early under Flavien Prat, came out 3 wide for room and swept to the lead through 7f in 1:25.20. Kept to task by Prat, Bellabel drew off late to win by 2 1/4 lengths over Shoppingforpharoah in 1:36.86. It was another 1/2 length back to favorite Helens Well third. 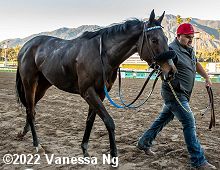 Left: Bellabel in the winner's circle. Winning owner Michael Nentwig said, "We're thrilled to have her. It was a last minute entry on Phil's decision. We gave him every opportunity to scratch because we liked Helens Well too, and he said no that we needed to run this filly too, so hat's off to Phil for doing that. It's a good team effort, I'm happy for these guys and thrilled for her going forward."

Right: Bellabel heads back to the barn after the race. Winning trainer Phil D'Amato said, "She'd shown enough ability where I thought she merited a shot in this race. Hat's off to Niles Dalton for finding these gems and Michael and the partners for putting up the money. I think I really had this filly about 80 percent fit too, so I think there is definitely room to improve here." 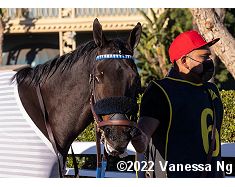 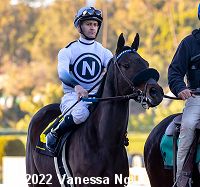 Left: Bellabel in the paddock before the race. Winning jockey Flavien Prat said, "We broke quite slow, so I was trying to get going and she responded so well that I actually found myself on the lead a bit sooner than I expected, but once I asked her to make her move, she was there for me. I really like the way she quickened down the lane. She should have a good future." 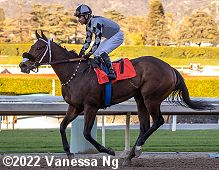 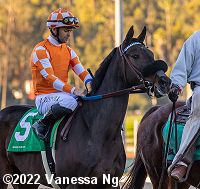 Closing out the New Year's weekend stakes action was the $100,000 Eddie Logan Stakes for 3-year-olds going 1 mile on the turf. After 1 scratch, Maglev was sent off as the 2-1 favorite in the field of 9 off a 5th place finish in the Mill Reef Stakes (G2) at Newbury. In to challenge him included 5-2 second choice Cabo Spirit, third in the Cecil B. DeMille (G3) at Del Mar, and 3-1 third choice Boise, winner of the Gold Rush Stakes at Golden Gate Fields. 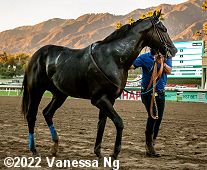 Left: Cabo Spirit in the winner's circle. Winning trainer George Papaprodromou said, "I think last time at the Grade 3 (Cecil B DeMille), he moved a little too soon, but what can I say he ran a huge race that day too. Today what I did was put the cheaters (blinkers) on him a little bit. Last time I had to put on the semis and he couldn't see the horse from the inside and outside. He kind of got a little confused I think, but today he just ran great. He settled nicely on the backside and he did run huge at the end."

Right: Cabo Spirit heads back to the barn after the race. Winning jockey Victor Espinoza said, "The turf is a little soft, so I figured if I go to the front, my chances wouldn't be that great, so I decided to take him back a little bit and just let him run in the end. If it works out, it works out, if not, we go for the next one. It seemed like he really liked that style and when I had a little room to let him run down the stretch, he opened up two lengths in no time. Now I learned something new from him, he can lay close or come from off the pace, which is great for him, he can go either way." 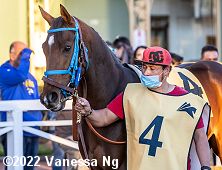 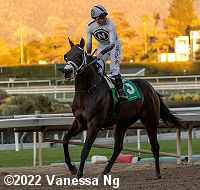 Left: Second place finisher and beaten favorite Maglev in the paddock before the race. The Mark Glatt trainee improved his record to 1 win, 3 seconds, and 0 thirds in 6 starts, earning $54,950 for owners Red Baron's Barn and Rancho Temescal.

Kicking off the Sunday stakes trio was the $75,000 Kalookan Queen Stakes for older fillies and mares sprinting 6 1/2 furlongs on the main track. After Stella Noir scratched, just 4 went to post with Breeders' Cup Filly and Mare Sprint (G1) runner-up Edgeway sent off as the 2-5 favorite over 9-5 second choice Merneith, winner of the Santa Monica (G1), 17-2 Stellar Sound, 4th in the Bayakoa (G3), and 16-1 Queengol off an allowance win back on October 23.

Jockey John Velazquez sent Edgeway to the lead exiting the chute and she set fractions of 22.15 and 44.96 while pressed by Merneith and stalked by Stellar Sound. Turning for home, Edgeway cleared the field, drawing off to win by 1 3/4 lengths over Merneith in 1:16.85. It was a long 5 1/2 lengths back to Stellar Sound third, and 1/2 a length more to Queengol last. 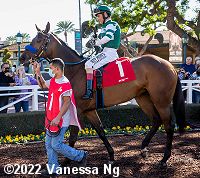 Left: Edgeway in the winner's circle. Winning owner Kosta Hronis said, "That was really good. She bounced out of the Breeders' Cup (Filly & Mare Sprint) really well. I think the plan was to give her a little bit more of a break, but she's been asking to run, so John (Sadler) had her all trained up and ready to go. It's an honor to have John (Velazquez). Any time we can have jockeys like this on the West Coast, we're always happy to see that."

Right: Edgeway in the paddock before the race. Winning jockey John Velazquez said, "I watched her run, obviously, she runs really good races. Today, the strategy was to chase them or chase me. I broke (well), let her run to the lead and let them catch me…when I asked her to run, she responded right away so I'm very proud. Thanks for the opportunity given to me here for riding these good horses." 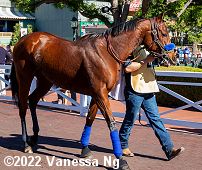 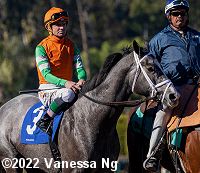 Also on Sunday, Santa Anita hosted the 2022 Corgi Winter Nationals sponsored by Southern California Corgi Nation, consisting of 10 heats and quarterfinal races run over a track laid out in the infield park, with the semi-finals and final race run on the main track before the grandstand. Race registration opened back on December 1 and all entry spots ($35 fee) were filled in less than a minute. 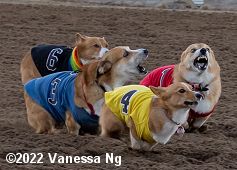 Left: The Corgis break from the starting gate.

Right: They look pretty serious about winning during the races.