The feature race on New Year's Eve at Santa Anita was the $75,000 Blue Norther Stakes for 2-year-old fillies going 1 mile on the turf. Conditions were excellent with a firm course, sunny skies, and temperatures in the high 60's. Javanica was sent off as the 9-5 favorite in the field of 8 off second place finishes in the Glorious Song Stakes at Woodbine and the Jimmy Durante (G3) at Del Mar. In to challenge her included 3-1 second choice Quattroelle, third in the Jimmy Durante after breaking her maiden at second asking, and 4-1 third choice Pizzazz, fourth in the Jimmy Durante after breaking maiden at third asking.

Jockey Juan Hernandez sent 23-1 Michalska to the lead first time by and she set fractions of 24.06, 48.18, and 1:12.37 while pressed by 11-2 fourth choice Carpe Fortuna and stalked by 35-1 Royal Blend. Turning for home Michalska tired as Quatroelle, 6th early after saving ground, came out for room and swept to the front through 7f in 1:24.21. Kept to task by jockey Tyler Baze, Quatroelle held off late-running favorite Javanica to win by 3/4 length in 1:35.72. It was another 1 1/4 lengths back to Carpe Fortuna third. 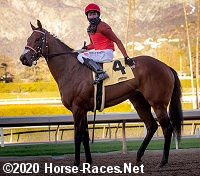 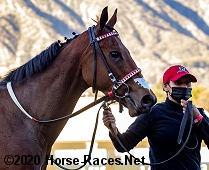 Left: Quattroelle in the winner's circle. Winning trainer Jeff Mullins said, "She ran great and we weren't surprised. She got knocked sideways real bad last time at Del Mar and she should've won. She's a real hard trying filly and she's done everything we've asked her."

Right: Quattroelle heads back to the barn after the race. 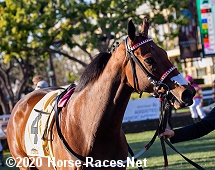 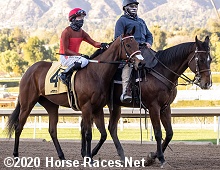 Left: Quattroelle in the paddock before the race.

Right: Quattroelle in the post parade. Winning jockey Tyler Baze said, "Her last race we got kind of slaughtered a couple of times around the turn, it cost her the race. She's a nice filly. I don't know how good she is, she is just very nice. She still has a lot of learning. Once I hit the lead she was pulling herself up all the way down the lane, really just having fun. Jeff is the best trainer, he has confidence in me and we both have confidence in the horse, that makes her good." 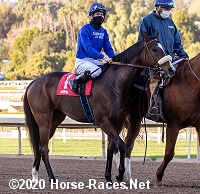 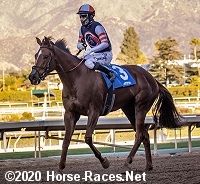 Left: Second place finisher and beaten favorite Javanica in the post parade. The Eoin Harty trainee improved her record to 1 wins, 3 seconds, and 0 thirds in 5 starts, earning $79,573 for owner-breeder Godolphin.

The horses break from the gate for the Blue Norther Stakes.