Currently, the best sprinter in the world is Black Caviar. The 7-year-old daughter of Bel Esprit out of the unraced Desert Sun mare Helsinge was foaled at Swettenham Stud in Nagambie, Victoria, and sold for $210,000 (all figures Australian) at the Inglis Melbourne Premier yearling sales. Her ownership group consists of a group of friends who go back as far as kindergarten, who decided to get organized and buy a racehorse together, a story similar to that of Sackatoga Stable, owners of 2003 Kentucky Derby winner Funny Cide. With America's Zenyatta and France's Goldikova now retired from racing, the eyes of the racing world are firmly on Black Caviar, the latest in a recent line of popular fillies and mares to string together winning streaks and beat males on the track. Large crowds pack the stands for each of her starts, and "Nelly", as she is called by her connections and fans, has yet to disappoint them.

On April 17, 2013, trainer Peter Moody and her owners announced that she was retired. Moody said, "We thought long and hard about racing on but believe she has done everything we asked of her and felt it was the right time to call time on her wonderful career. She's in such great shape but that's always been the way we wanted her to bow out. We just thought the time was right. The owners and myself have had a long chat for the past couple of days. Collectively we decided the mare's in great shape, we thought long and hard about racing at the international season. We decided 25 was a great number and she did us all proud on Saturday. She has done everything she has been asked to do. I know we've won 25 from 25, but I like to think we've done a great job promoting our sport. She brought interest to our sport that hasn't been there for decades. Black Caviars don't come along every day." Moody said that the now-famous salmon pink silks would not be used for any other horse. Senior co-owner Neil Werrett added, "We've got a bit of time, but we'll start working it out (which stallion to breed to) tomorrow. We hope that in three years, Peter Moody will be training a progeny of Black Caviar." Black Caviar will be paraded in a retirement ceremony at Caulfield Racecourse on Saturday April 20. 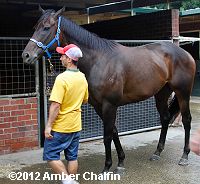 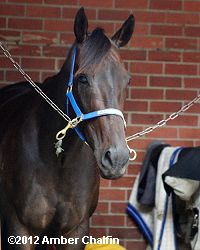 In a visit to Australia last year, photographer Amber Chalfin had the pleasure of visiting Black Caviar at the barn of her trainer Peter Moody. Moody keeps a stable of about 60 horses on the Caulfield Racecourse backstretch, with assistant Tony Haydon, wife Sarah, racing manager Jeff O'Connor, and office administrator Marni Kelly, and was the leading trainer in Australia for the last 2 seasons, wresting that title from the Hayes and Freedman clans which had a stranglehold on the premiership for over 3 decades. She has been ridden by jockey Luke Nolen for all of her starts except her first two, when Jarrad Noske was in the irons, and the 2010 Patinack Farm Classic, where Ben Melham replaced Nolen who was serving a suspension. 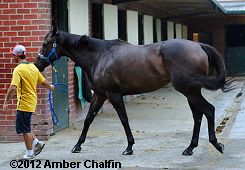 She has raced exclusively in stakes company except her debut, a restricted handicap for 2-year-olds in April 2009. Since then she has won the Lightning Stakes three times (the only horse to do so), and the Patinack Farm Classic, Schweppes Stakes, Schillaci Stakes, Australia Stakes, William Reid Stakes, and T.J. Smith Stakes twice each. Interestingly she has never raced in Group 3 company, moving from Listed stakes directly to Group 2 in her fourth start, the Danehill at Flemington. She has won by 6 lengths twice, and her closest margin was a neck in the Diamond Jubilee Stakes (G1) at Royal Ascot. She has only raced at sprint distances of 7 furlongs or less on the turf, and exclusively at Australia's top tracks of Flemington, Caulfield, Moonee Valley, and Randwick, before her trip to England last year.

On Friday, January 27, 2012, she won the Australia Stakes (G2) for the second time, extending her unbeaten streak to 17. She stalked the early pace and then at the top of the short Moonee Valley stretch, found another gear and powered away to win by 4 1/4 lengths over Zedi Knight in a time of 1:09.44 for 1200 meters over good turf.

On Saturday, February 11, 2012, she stretched out to 1400 meters (7 furlongs) in the C.F. Orr Stakes (G1) at home at Caulfield and did not disappoint in her 18th start, stalking the pace as usual then taking over at the 3/16 pole to win by 3 lengths over late-closing Southern Speed in 1:25.14 over dead turf. Then a week later on February 19, she equalled Zenyatta's 19-race win streak, taking the Lightning Stakes (G1) at Flemington for the second time by 1 3/4 lengths over Hay List in 55.53 seconds for the 1000 meters over good turf, just 3/100 second off the stakes and track record.

On Saturday, April 28, 2012, she set a world record of 20 wins in 20 starts, in the Robert Sangster Sportingbet Classic (G1) at Morphettville by 4 1/2 lengths over Sistine Angel, travelling the 1200 meters in 1:10.65 over dead turf. On May 12, she extended her world record to 21 wins in 21 starts, in the Goodwood Stakes (G1) at Morphettville by 1 1/4 lengths over We're Gonna Rock, travelling the 1200 meters in 1:10.32 over good turf. Shipping to England, she barely hung on in the Diamond Jubilee Stakes (G1) at Royal Ascot. She gained the lead in the final furlong but Nolen misjudged the finish and stopped riding about 20 yards from the finish, almost allowing Moonlight Cloud to pass on the outside. She held on by a neck, getting the 6 furlongs in 1:14.10 over good to soft turf for win number 22. It was later discovered that she injured her back during the race and she needed an extended lay-off to recover.

On February 16, 2013, she came back to Flemington for her first start of 2013 and 27,046 fans were on hand to see her. She was coming off an 8-month layoff to recover from a back injury suffered at Ascot last year as well as being stung by a swarm of bees while in quarantine. She returned in the Black Caviar Lightning Stakes (G1), which was renamed in her honour after winning it twice already, and showed she hadn't lost a step. She took the lead immediately and after opening up a 4 length advantage at the 1/8 pole, and jockey Luke Nolen geared her down as she finished 2 1/2 lengths in front of stablemate Moment of Change in a time of 55.42 seconds over dead turf for the 1000 meter distance, breaking a 25-year-old course record and extending her world record streak to 23. This was her third win in the Lightning Stakes, and she the only horse to ever accomplish the feat.

On March 22, 2013, she easily notched win number 24 in the William Reid Stakes (G1) before over 25,000 fans at Moonee Valley. Bet down to odds of 3-100, she stalked the pace then pounced at the 3/16 pole, drawing off to win by 4 lengths over stablemate Karuta Queen in 1:11.08 for the 1200 meter trip over good turf. The feat gives her 14 Group 1 wins, tying the great Kingston Town for the all-time record, and was her second William Reid win, having also won in 2011. The race was billed as probably her final start in Melbourne. Trainer Peter Moody said, "She's going super. It's scary how well she's going. I've thought she was going as good as ever and I'm glad she's proving me right. It's just great to see the people out here and see her put on a great show. As a headline for our sport she's second to none."

The unbeated streak extended to 25 on April 13, 2013 it what turned out to be her final career start, when she won the T.J. Smith Stakes (G1) at a sold-out Randwick Racecourse in Sydney, breaking Kingston Town's record for Group 1 wins. Sent off at odds of 1-7, she sat in midpack in traffic early, but jockey Luke Nolen got her out into the clear at the top of the lane and quickly she left the field in her wake, finishing 3 lengths in front of Epaulette in 1:09.65 over the dead turf course. Trainer Peter Moody said, "She put on one hell of a show. Twenty-five straight, unbelievable, 15 Group Ones. What more do you say? Horses look fast until they line up against her. It's extra special as it's a bit of a homecoming for me. I know I'm a Queensland boy but this is where I learnt most of my craft and I worked for the great T.J. for a lot of years so to win a race in his honour, the same as was a couple of years ago, it's special for all of us." She is the only horse to win the T.J. Smith twice. 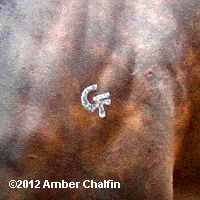 In the photo to the right, you can see her owner's brand. In Australia, horses to be registered in the Stud Book must have their parentage verified by DNA testing, as well as be microchipped and freeze-branded with both their owner's brand (left side) and a foal number (right side). Dry ice or liquid nitrogen cools the heavy copper or bronze iron which is then applied to a shaved area on the body, which destroys the pigment forming cells of the hair follicle. Hairs that grow from the branded follicles are white, leaving a permanent mark.

Please click the small photos to see a larger version.