The $250,000 Bison City Stakes is the second leg of the Canadian Triple Tiara series for 3-year-old fillies foaled in Canada. With Woodbine Oaks winner Inglorious winning last week's Queen's Plate against males, this left a wide-open field of just 6 to go 1 1/16 miles over the Polytrack at Woodbine, on a warm Sunday afternoon with temperatures in the mid 80's. Oaks runner-up Spooky Kitten was the 9-5 favorite, winless since breaking her maiden 3 starts back at Keeneland in April. In to challenge her included 2-1 second choice Marketing Mix, third in the Oaks after finishing second in the Fury Stakes, and 3-1 third choice Niigon's Touch, winner of her first two starts and making her stakes debut. 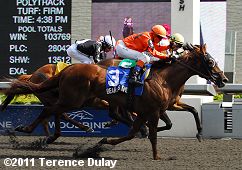 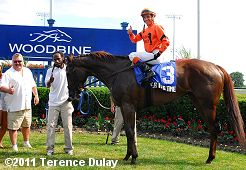 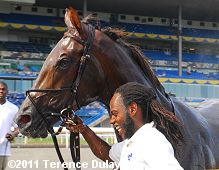 Left: Bear It's Time in the winner's circle with owner Danny Dion on the far left. Her trainer Reade Baker said, "That wasn't fair, the Oaks. Emma (Wilson) rode her perfect but she was too sharp that day, never mind coming back in 13 days. We had a little bit more time (to prepare for the Bison City) and she'll probably be better down the road."

Right: Bear It's Time gets hosed off before heading to the barn. 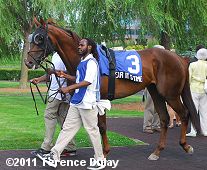 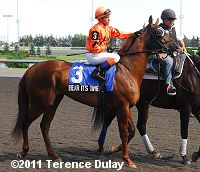 Left: Bear It's Time in the paddock before the race. Trainer Reade Baker added, "It was perfect but (jockey Luis Contreras) could have made it a little easier. I thought of ducking these races to go to the Ontario-sired races but the Ontario-sired that ran second (Niigon's Touch) ran a hell of a race." 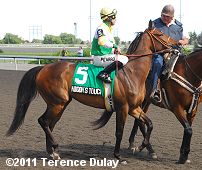 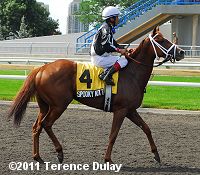 Left: Second place finisher Niigon's Touch in the post parade. The 3-1 third choice stalked the pace in third under jockey Tyler Pizarro, gained a short lead midstretch but could not contain the winner. The Paul Attard trainee improved her record to 2 wins and 1 second in 3 starts, earning $121,420 for owner-breeder Chiefswood Stable.

Right: Third place finisher and beaten favorite Spooky Kitten returns after the race. The 9-5 favorite contested the early pace under jockey Edgar Prado, gained a short lead on the turn but was passed late to finish third beaten just 1/2 a length. The Mark Casse trainee improved her record to 2 wins, 1 second, and 1 third in 5 starts, earning $150,217 for owner Roddy Valente.


The undercard feature on Sunday at Woodbine was the $150,000 Clarendon Stakes for Ontario-foaled 2-year-olds. A field of 6 sprinted 5 1/2 furlongs on Polytrack, with Jenna's Wabbit sent off as the even-money favorite, off a maiden win last out. In to challenge him included 5-2 second choice Jomelo, off a second place effort in his debut, and 3-1 Making Amends, making his career debut off 5 workouts.

Jockey Eurico Rosa da Silva sent Jenna's Wabbit to the front down the backstretch and he set quick fractions of 22.22 and 45.17 while as many as 1 1/2 lengths in front of Jomelo stalking him second. Jenna's Wabbit opened up a 3 length lead at the 1/8 pole through 5/8 in 57.47, but Making Amends, who sat in third early, responded when asked by Patrick Husbands and got up to win by a neck in 1:04.15. It was another 3 lengths back to Jomelo third. 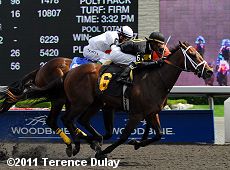 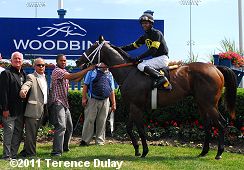 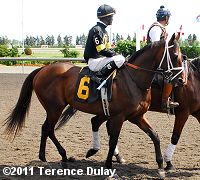 Left: Making Amends in the winner's circle. His trainer Mark Casse said, "This horse has been towards the top of the class for a long time. When we got him here 3 or 4 weeks ago, I knew I wasn't going to have time for a maiden race so I pointed him right for this race. My only concern was could he get up (in time). This horse wants to run on."

Right: Making Amends in the post parade. His jockey Patrick Husbands said, "We spent a lot of time with this horse the last 3 works and Mark and myself knew he wanted to go long. I just let him come out of the gate and get his legs together and when I asked him I knew he would give me his all." 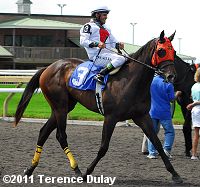 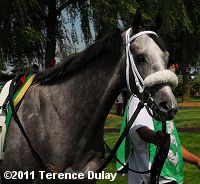 Left: Second place finisher Jenna's Wabbit returns after the race. The even-money favorite set the early pace under jockey Eurico Rosa da Silva, opened a clear lead in the stretch but failed to hold off the winner. The Ralph Biamonte trainee improved his record to 1 win, 1 second, and 1 third in 3 starts, earning $70,557 for owner Danny Lococo.

Right: Third place finisher Jomelo in the paddock before the race. The 5-2 second choice stalked the pace under jockey Tyler Pizarro but evened out late to finish third beaten 3 1/4 lengths. The Sid Attard trainee improved his record to 1 second and 1 third in 2 starts, earning $30,230 for owner Jim Lawson.