The feature race at Del Mar on Saturday was the $300,000 Bing Crosby Stakes (G1) for older horses sprinting 6 furlongs on the main track and is a Breeders' Cup Challenge "Win and You're In" qualifier for the Sprint. Conditions were excellent with cloudy skies and temperatures in the low 70's, with the main track fast and the Jimmy Durante turf course firm. Count Fleet Sprint Handicap (G3) winner Z Rocket was sent off as the 3-2 favorite in the field of 8 off his runner-up effort in the Steve Sexton Mile (G3) at Lone Star Park. In to challenge him included 5-2 second choice Dr. Schivel, an allowance winner in June after winning the Del Mar Futurity (G1) last September, and 5-1 third choice Brickyard Ride, winner of the Thor's Echo Stakes in June.

Jockey Juan Hernandez sent Brickyard Ride to the lead exiting the chute and he set fractions of 21.83 and 44.67 while pressed by 21-1 Law Abidin Citizen and stalked by 16-1 Eight Rings. Turning for home Brickyard Ride continued to lead through 5f in 57.39 before tiring. Dr. Schivel, 6th early under Flavien Prat, came out 4 wide for room and rallied to win by a neck over Eight Rings in 1:10.47. It was a head back to late-running favorite C Z Rocket third. 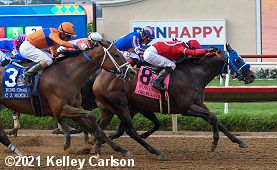 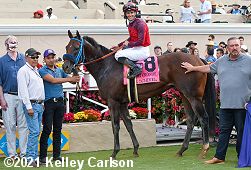 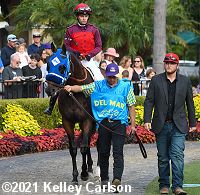 Left: Dr. Schivel in the winner's circle. Winning trainer Mark Glatt said, "They went fast early, maybe not as fast as we thought. Flavien rode him perfectly, gave him a good trip, and the outside post was a benefit. This is a real racehorse. He beat the olders today, and hopefully in November (Breeders' Cup Sprint) he'll be able to do it again." Asked about the scratch of last year's winner and stablemate Collusion Illusion, Glatt added "He grabbed a quarter training yesterday and he just wasn't perfect on it today. It probably would have been safe to run him but the ownership group and I thought it was best to err on the conservative side and have him run another day."

Right: Dr. Schivel in the paddock. Winning jockey Flavien Prat said, "No special instructions; just ride. He broke well, then when we went across the gap, he grabbed the bit. He was running well, pretty much all the way around. He was game late. Good win." 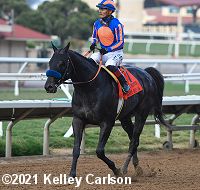 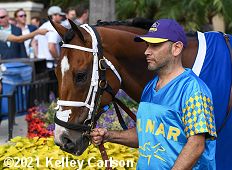