On Saturday, Belmont Park hosted Big Apple Showcase Day, a series of 7 stakes races for New York-breds with a total of $850,000 in purses. Conditions were excellent for the 6,487 fans in attendance, enjoying sunny skies and temperatures in the high 70's.

Readtheprospectus extended his winning streak to 6 since breaking his maiden in October. Winning trainer Chad Brown said, "What a pleasant surprise he has been. He's always acted like a horse with some talent, and after his first couple of starts we started experimenting with him and learned that it was more about the distance than the surface. Here's a horse who wants to run all day. The plan was to keep him out of trouble, in the clear. If he's good enough, he'll win. If not, I'll accept it. The one thing I didn't want to do was get him in trouble. He was training too well to risk it." 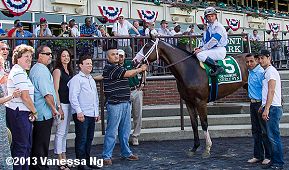 A field of 5 three-year-old fillies contested the $125,000 Bouwerie Stakes at 7 furlongs Jockey Javier Castellano sent 1-4 favorite Lovely Syn to a clear lead immediately and she set fractions of 21.95 and 44.34. Entering the lane, she opened up a 12 length advantage getting 3/4 in 1:08.15. 9-2 second choice Kelli Got Frosty rallied from fourth but Lovely Syn finished up under wraps 10 1/4 lengths in front in 1:21.58. It was just a neck back to 6-1 third choice Kitty Panda third.

Winning trainer Dominick Schettino said, "She gets better and better every race, and she does it so easily. I talked to Javier about the race, and he's happy that she settles. She's not rank. She relaxes for you and runs well within herself." Castellano added, "I've never seen a horse so quick out of the gate. But she doesn't act like it; she's so calm and laid back with a really good mind. I've ridden a lot of good horses, but this one is amazing." 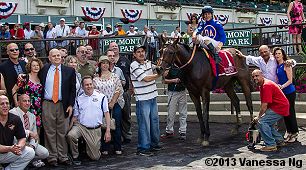 Winning jockey Junior Alvarado said, "He definitely was really sharp today. Probably last time he had way too much weight, so he wasn't that sharp like he was today. He's definitely an unbelievable horse. He broke good, and I tried to relax him a little bit, but as soon as I put him in a clear spot outside, he just did it himself. He just found a way to win." 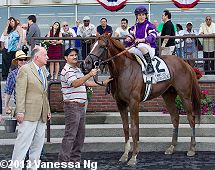 A field of 7 three-year-olds contested the $125,000 Mike Lee Stakes at 7 furlongs, the first leg of the Big Apple Triple. 5-1 Hay Shares and 7-5 favorite Weekend Hideaway battled for the lead through fractions of 22.26 and 45.10 while stalked by 7-1 Smooth Bert. In the stretch, Hay Shares tired allowing Weekend Hideaway to inherit the lead through 3/4 in 1:09.22, but 12-1 Amberjack, 4th early, came through between horses to pass the favorite inside the 1/16 pole, winning by 1 3/4 lengths in 1:21.64. It was another length back to Smoooth Bert third.

Winning jockey Junior Alvarado said, "I was really pleased with the position that I was in all the way. I was just hoping that by the time that I asked him he would give me a nice kick, and he did. At the 5/16 I started to pick it up because he's a big horse and you have to start kind of early with him. I asked him, and he responded pretty well for me and kicked big there at the end." Amberjack will go next in the New York Derby on July 20 at Finger Lakes, the second leg of the series. Should he sweep the series, which concludes with the Albany Stakes on August 21 at Saratoga, he would receive a $250,000 bonus. 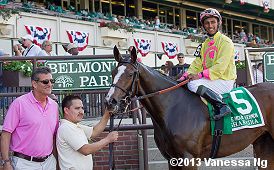 Winning trainer Chad Brown said, "We freshened her over the winter, and she responded really well. (Owner) Michael Dubb and his partners deserve a lot of credit because I just kept her with me all winter at Palm Meadows. When you have a New York-bred turf horse, it eliminates the winter, so you're forced to be patient. She always fires for you. You just wait for the New York-bred turf season and hope the weather holds. She's five, and a restricted stake winner, so we might venture outside New York-breds." 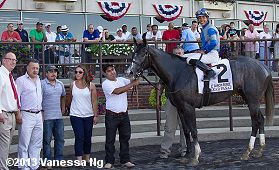 A field of 6 older fillies and mares sprinted 7 furlongs in the $100,000 Dancing Renee Handicap. 4-1 fourth choice Clear Pasaj opened up a 2 length lead down the backstretch through fractions of 23.15 and 45.90 while stalked by 5-2 second choice Beautiful But Blue. Clear Pasaj continued to lead into the stretch, getting 3/4 in 1:09.98. 12-1 longest shot Lady On The Run, last early, closed with a rush but Clear Pasaj held her off by a head in 1:22.60. It was another 1 3/4 lengths back to Beautiful But Blue third.

Winning jockey Jose Ortiz said, "She broke good and put me in a very good position. (Beautiful But Blue) put a little pressure on me early. My filly waited a little bit in the stretch but when she felt the other horses coming she started running again." Trainer Bruce Levine added, "She really held well going a mile last time. She came out of the race and she wasn't really tired. Last time I thought I'd be on the lead and some horse went out there and I stalked her. It's not like she got loose and went the mile, so I had a lot of confidence going seven-eighths." 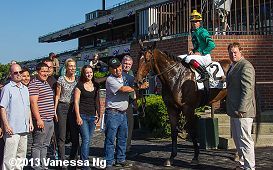 Winning trainer Jeremiah Englehart said, "He can carry his speed even if he goes fast, but today he had some nice breaks. The fractions were a couple of ticks slower. It looked like the horses in second, third, and fourth had horse, but Irad said he still had a lot of horse. When they come up to him, he finds another gear, which is nice. This was a tough field today. I knew all along I wanted to run him in New York-bred races, but I knew he wasn't going to get a breather from the other races he was in."