Thanksgiving weekend at Aqueduct continued with three listed stakes events on Black Friday afternoon. Similar to Thursday, it was again overcast with intermittent showers and temperatures in the low 50's. The $100,000 Key Cents Stakes featured a field of 12 New York-bred 2-year-old fillies sprinting 6 furlongs on the main track. Kim Royale was sent off as the 3-1 favorite off her debut win last out at Belmont, over 16-5 second choice Overnegotiate, a debut winner at Aqueduct over the same trip, and 13-4 third choice Filibustin, winner of the Joseph A. Gimma Stakes.


Jockey Jose Lezcano sent Filibustin to the lead exiting the chute through an opening quarter of 23.18 before 65-1 Ribbonite took over on the far turn through a half in 47.39. Entering the stretch, Filibustin, who stayed close the whole way, took over the lead for good through 5/8 in 59.54. Overnegotiate attempted to close from 4th but Filibustin drew off in the last furlong to win going away by 3 lengths in 1:12.50 over the fast main track. It was another 1 1/4 length back to Ribbonite third. Favorite Kim Royale trailed early and was pulled up by jockey Anonio Gallardo at the 5/16 pole after a bad step. 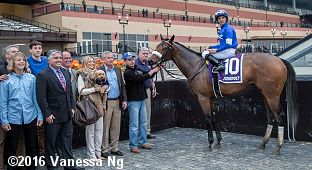 Winning trainer Greg Sacco said, "I thought she was in a good position the whole race and then sending her for home, it's just whether you're good enough. Every time you run, you have to answer the bell. There were some really impressive horses in this race, which made the race a little interesting. There was a little different dynamic than the last race. Three wins at three different tracks, three different surfaces; she's just a really neat New York-bred filly to have." Jockey Jose Lezcano added, "She broke very good and I let her go and do her thing. I asked her within the last sixteenths, and she really took off and won the race easily."


The $125,000 Winter Memories Stakes featured a field of 10 three-year-old fillies going 1 1/16 miles on the turf. Commonwealth Oaks (G3) winner My Impression was sent off as the 11-4 favorite off her third lace finish in the Valley View (G3) at Keeneland. In to challenge her included 4-1 second choice Danilovna, a close second in the Autumn Miss (G3) at Santa Anita, and 11-2 third choice Sassy Little Lila, winner of two straight in allowance company and making her stakes debut here. 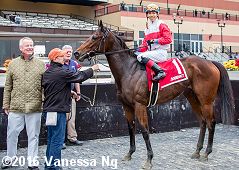 Jockey Forest Boyce sent 12-1 Koala Queen to the lead first time by through fractions of 24.03, 48.96, and 1:13.96 over the good course while pressed by 30-1 Gianna's Dream and stalked by 6-1 Gioia Stella. Entering the stretch Koala Queen tired allowing Gianna's Dream to inherit the lead through 1 mile in 1:38.18. However, favorite My Impression, 6th early, closed 5 wide and then held off late-running Sassy Little Lila to win by 1/2 a length in 1:44.22. It was another 1/2 length back to Gianna's Dream third.

Winning jockey Jose Ortiz said, "She's a filly that would rather cover up. When she gets out, she explodes. Today, I was able to cover up. They went fast in front of us, but when I asked her to go, she responded well. I was following the whole way; the leader went inside, so I had to go out. I had a perfect trip and saved ground and she went without too much difficulty. She gave me a great run." Robbie Medina, assistant to trainer Shug McGaughey added, "She had an outside post and that's what she wants, to sit about four or five lengths from off the pace. She settled very well today and she kind of kicked like she did at Laurel, that's what she's capable of."


Kicking off the stakes trio on Friday was the $125,000 Thunder Rumble Divison of the New York Stallion Series for New York-sired older horses sprinting 7 furlongs on the main track. Empire Dreams was sent off as the 2-1 favorite in the field of 8 over 7-2 Loki's Vengeance and 5-1 West Hills Giant. Jockey Jose Ortiz sent Loki's Vengeance to the lead exiting the chute and he set fractions of 23.32 and 46.69 while pressed by 8-1 Becker's Galaxy and stalked by 11-2 Jet Black. Turning for home, Loki's Vengeance left the field in his wake, opening up by 4 lengths midstretch through 3/4 in 1:10.56, and drawing off late to win by 7 1/4 lengths over Becker's Galaxy in 1:23.20. It was just a neck back to late-running West Hills Giant third, who nosed out favorite Empire Dreams in fourth. 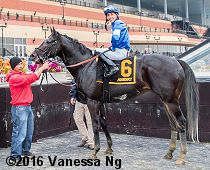 Winning trainer Mike Hushion said, "Sometimes he breaks so hard he stumbles only because he's so powerful coming out of there like a quarter horse. When I looked at the 1/4 pole and I saw everyone moving already and nobody really closing that was a real help and when he kicked away from Irad (Ortiz Jr. aboard Becker's Galaxy) I felt pretty good." Jockey Jose Ortiz added, "He broke great and put me on the lead. Mike told me that he breaks really good, and don't be afraid to go to the lead. He did, and when I asked him to go at the three-sixteenths pole he exploded. He gave me a great turn of foot."