The distaff counterpart to the Arlington Million is the $700,000 Beverly D Stakes (G1). A field of 9 older fillies and mares contested this 1 3/16 mile trip over the rain-soaked Arlington turf course on Saturday looking for automatic entry in the Breeders' Cup Filly and Mare Turf (G1) under the "Win and You're In" promotion. Defending champ Euro Charline was sent off as the 5-2 favorite off her second place finish in the Falmouth (G1) after fourth in the Dubai Turf (G1). In to challenge her included 3-1 second choice Stephanie's Kitten, 2nd in this race last year but 5th in the Diana (G1) last out, and 7-2 third choice Wedding Vow, 2nd in the Nassau (G1) at Goodwood. 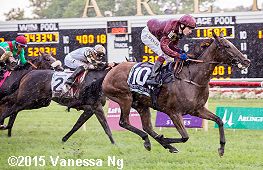 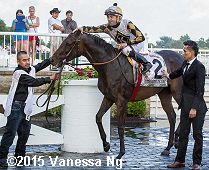 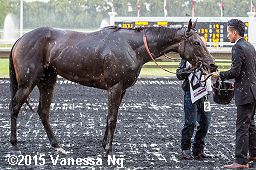 Left: Watsdachances in the winner's circle. Winning trainer Chad Brown, who also trains Stephanie's Kitten, said, "I think the stewards made the right call and we were lucky that both fillies fired today."

Right: Watsdachances heads back to the barn after the race. 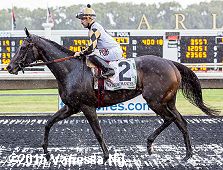 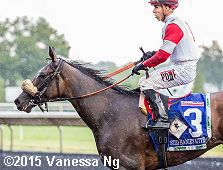 Left: Watsdachances returns after the race. Winning jockey Joe Bravo said, "You can't make this game up: with the rainstorm we got, and they had her ready to run and she just loved the distance." 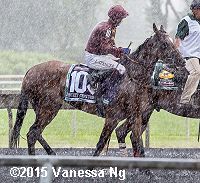 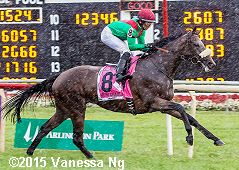 Right: Fourth place finisher and beaten favorite Euro Charline leads first time by. Jockey Jose Lezcano said, "My filly really broke sharp and never relaxed she just pulled me the whole way and when the other came I tried to give her a kick but she was just too tired." 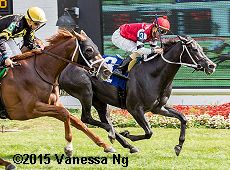 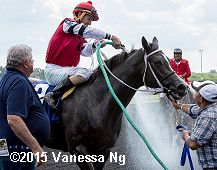