On a cold Saturday afternoon at Woodbine, the richest stakes race in North America this week was contested, as twelve older fillies and mares went to post in the $150,000 Bessarabian Handicap. This Grade 3 seven furlong sprint on the main track is the last graded stakes race in Canada for 2005, so we decided to make the trip to Woodbine to see it. Silver Bird was sent off as the lukewarm 3-1 favorite, despite only winning once all year although she did have a 2nd place finish in the Grade 3 Seaway Stakes in September at the same distance. Also in the field was 4-1 second choice Colonial Surprise, who was 6th in this event a year ago but comes into this edition off a 1 3/4 length win in the Ontario Fashion Handicap. Third choice on the board was 6-1 Hatpin from the perennial powerhouse Sam-Son Farm. The lone 3-year-old in the field was making her 10th start of the year, including a win in the Alywow Stakes and a second place finish in the Grade 3 Duchess Stakes. At race time, the temperature was just 30 degrees (F or -3C), but with a 20 MPH headwind through the homestretch, the official wind chill was a frigid 18 degrees.

When the gate opened, favorite Silver Bird was sent to the lead with Hatpin and 7-1 shot Stonington joining her on the front end. The group got the initial quarter in a tailwind-aided 22.67 seconds. Entering the turn, Stonington shook off her fellow pacemakers, getting the half in 44.87 but with just a slim lead. At the top of the stretch, it was still anybody's race, as the threesome continued to battle up front. Colonial Surprise was asked for run by jockey Eurico Da Silva and got it, as she surged ahead to a slim 1/2 length lead at the 1/8 pole, with the favorite already dropping out of contention. However, 30-1 longshot Miss Concerto, who had settled in midpack early, was closing well, and drove right by Colonial Surprise before the 1/16 pole and drew clear to a 2 length win in a time of 1:25.00 for the 7 furlongs. It was just a neck back to Hatpin in third, while favored Silver Bird disappointed in seventh. The win improves Miss Concerto's lifetime record to 6 wins in 24 starts, with career earnings of $299,051. 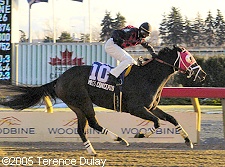 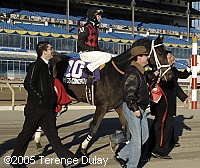 The happy connections lead Miss Concerto to the winner's circle. Winning owner Lou Tucci said, "In the end, it doesn't matter who picks them. Time and time again, we claim horses with Sid (trainer Attard) that don't win the race we claim them from and what does he do? He improves them. Nobody does it better." Miss Concerto was claimed for $50,000 on July 31, and this is her third win for her new connections.

Winning trainer Sid Attard said, "I thought it was a tough race for this filly (Miss Concerto), but for a minute I thought it was One for Rose coming." One For Rose is the 2-time champion mare also owned by Tucci Stables and trained by Attard. 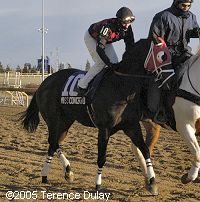 Miss Concerto in the post parade. Winning jockey Corey Fraser, who was the champion apprentice in Canada last year and will finish second in wins this year as a journeyman, said, "(The race) worked out nicely. Around the turn, they spread it out a bit and gave me a nice lane to save some ground." This was Fraser's fifth stakes win of the year. 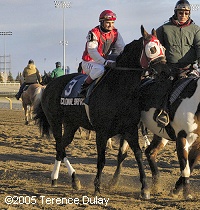 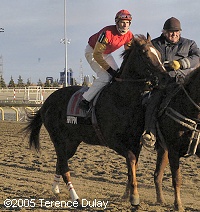