The $400,000 Beldame Stakes (G1) features older fillies and mares going 1 1/8 miles around one turn of the main track at Belmont Park as a final East Coast prep for the Breeders' Cup Distaff, however this is not a Challenge race. Conditions were typical for early October on Long Island with overcast skies and temperatures in the high 60's, with the main track fast and turf good. Shuvee (G2) runner-up Wow Cat was sent off as the 6-5 favorite in the field of 8 off a 3rd place finish in the Personal Ensign (G1). In to challenge her included 7-2 second choice Divine Miss Grey, winner of the Dr. James Penny Memorial at Parx, and 9-2 third choice Verve's Tale, 3rd in the Shuvee. 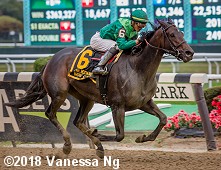 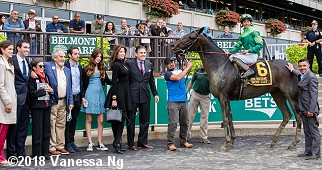 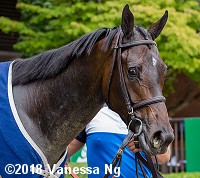 Left: Wow Cat in the winner's circle. Winning trainer Chad Brown said, "It takes your breath away just looking at her, physically. We can't take any credit for the way she looks; she arrived this way. It took awhile for her to acclimate. She was training really well heading into Saratoga. Not only did some extra time help her, I don't think she really cared that much for Saratoga, in hindsight. She never trained great once I got her up there. She trained OK. She got beat 10 lengths last time [in the Grade 1 Personal Ensign] by two really good fillies, but I didn't think the gap should be 10 lengths. She's really a top-class horse. She came to us undefeated. She's legit."

Right: Wow Cat heads back to the barn after the race. Winning jockey Jose Ortiz said, "It was amazing. She broke really well and put me into a great position. I knew we were going a little fast, but she was doing it easy. When we went to the 5/8 pole, I was right behind Irad, and there was nobody else, so I decided to take that position and ride her like the best. She was the best for today. Chad her her ready, She was there for me." 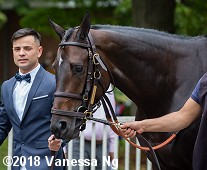 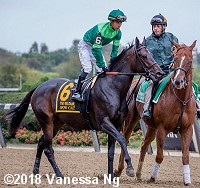 Left: Wow Cat in the paddock. Ortiz added, "The last time she ran against the best two mares in the country. The first time she ran in the United States, she needed the race. She was off a layoff, and she was good enough to run second. She came back and ran great. She's getting better and better. I think she's a really special mare."

Right: Wow Cat in the post parade. Brown added, "She might just be coming around and getting climatized over here and really finding her rhythm, and finding a surface she likes...if she goes to Churchill and likes it, who knows. I'm open to it. She looked great. I was watching on a head-on screen in one of the boxes. I felt really good watching the head-on because Jose [Ortiz] was always looking around him and was well in hand the whole way around the turn. I had a good feeling throughout the race." 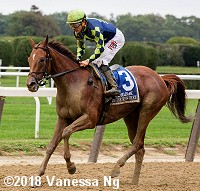 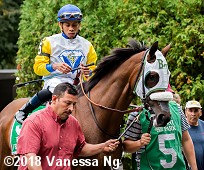 Left: Second place finisher Divine Miss Grey returns after the race. Jockey Junior Alvarado said, "I didn't have the trip I probably wanted to have. If I was stalking, I would have liked to have been on the outside position, where (Wow Cat) was. But I drew inside, so I had to work with what I was getting at the time. She was there for me. I thought she ran huge. Turning for home, I moved her out because I know she doesn't like to be on the inside at all. She was going to be hesitant the whole way around. When I asked her, she came out with a great effort. She was second-best today. She handled the distance pretty well."

Right: Third place finisher Verve's Tale heads out of the paddock before the race. The Barclay Tagg trainee improved her record to 3 wins, 7 seconds, and 7 thirds in 22 starts, earning $616,400 for owner-breeder Charles Fipke.


Kicking off the stakes quartet was the $150,000 Belmont Turf Sprint Invitational for older horses sprinting 6 furlongs on the inner turf course, the major prep for the Breeders' Cup Turf Sprint but also not a Challenge event. Jaipur (G2) winner and defending champion Disco Partner was the 11-10 favorite in the field of 6 over 7-2 Pure Sensation, winner of the Turf Monster (G3), and 5-1 Proforma, winner of the Kentucky Downs Turf Sprint (G3).

Jockey Jose Ortiz sent Pure Sensation to the lead through fractions of 21.97 and 45.08 while pressed by 11-2 fourth choice Gidu and stalked by Disco Partner. Into the lane jockey Irad Ortiz Jr. sent Disco Partner to lead through 5f in 56.64, and he drew off late to win by 4 1/2 lengths over late-running 9-1 Blind Ambition in 1:08.50 over the firm going. It was another 1/2 length back to Pure Sensation third. 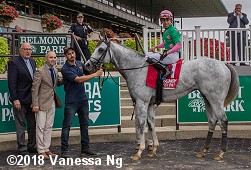 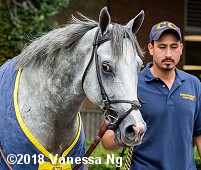 Left: Disco Partner in the winner's circle. Winning trainer Christophe Clement said, "A great credit to their program, Mr. and Mrs. Generazio. He's getting older, but he's still one of the best, if not the best sprinter, in New York, and I thought it was a very impressive performance. Irad [Ortiz, Jr.] was not too hard on him which is great. As long as he comes back in good shape, we'll get him ready for the Breeders' Cup. I don't like to have too hard of a race before the Breeders' Cup, so I was very happy with the performance today."

Right: Disco Partner heads back to the barn. Winning jockey Irad Ortiz Jr. said, "I got a perfect trip. He broke well. I took a hold of him, and when I asked him, he took off. He made me feel very confident on top of him. When I asked him, he was there for me. He was traveling perfect and then I smooched on him at the 3/8 pole and he took off right away for me. I knew he was going to be there for me. He's a fighter. He always shows up." 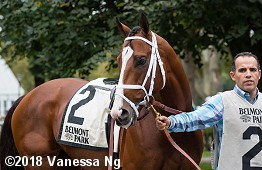 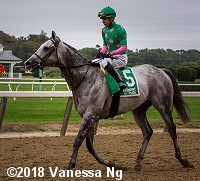 Left: Second place finisher Blind Ambition in the paddock. Trainer Todd Pletcher said, "I thought Blind Ambition ran extremely well. Unfortunately, he was just second best to an extremely good horse today. We kind of decided we'd let him find himself early wherever he was comfortable. He settled well and put in a good closing kick. He just wasn't as good as the winner." Jockey Manny Franco added, I was able to follow the winner all the way to the stretch. My horse gave it all, but the winner was much the best. I felt like I had horse but not enough to beat the winner. He ran good; he gave me all he had."

Right: Third place finisher Pure Sensation returns after the race. Trainer Christophe Clement said, "He actually ran very well. It's not really his best ground, and he ran really good and got caught in the last furlong. We'll see how he comes out of it. He could be a possible as well. I'll ask Mr. and Mrs. Generazio. It's a good position to be in."