The Belmont Stakes Racing Festival runs from Thursday to Saturday, highlighted by the 147th Belmont Stakes run on Saturday with American Pharoah attemping to become the 12th Triple Crown winner. On a cool and cloudy Thursday morning, a few of the Belmont Stakes entrants went out to test the 1 1/2 mile main track on Long Island, followed by an afternoon card of racing including 2 listed stakes races. 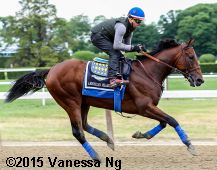 American Pharoah galloped once around the main track Thursday morning and then schooled in the paddock in the afternoon. Trainer Bob Baffert said, "He loves it here. These stalls are so nice and big. He likes it here. He's in the Big Apple now. You know what? Things can change overnight, but the way he feels, the way he's trained, right now everything is going really smoothly. I like what I see."

"It was his first trip around there and we jogged straight off and he started galloping about the seven-eighths pole. I really couldn't see anything down the backside because it's so big around there, but when he finally came down the stretch he was moving so fluid, just like he usually does. It was a very positive gallop. He looks like he's just moving along like he's always moved along. It was very comforting to see that," said Baffert. 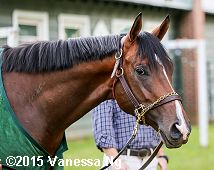 Tale of Verve galloped on Thursday morning and schooled in the paddock between races Thursday afternoon. Despite losing jockey Joel Rosario to Frosted, trainer Dallas Stewart is very pleased with the position he's in with Preakness runner-up Tale of Verve heading into the Belmont Stakes. Shortly after Tale of Verve's surprising second-place finish in the middle leg of the Triple Crown with Rosario in the irons, Stewart secured the services of Hall of Fame jockey Gary Stevens for the Belmont.

"He [Gary] actually called and I called his agent and said I'll let you know by tomorrow but we're looking good. He wanted to ride him. He knows how to win this race and he's winning every week in California. He's riding well, and I like to see that," Stewart said. Stevens and Tale of Verve will leave from post 2 on Saturday. It will be the veteran jockey's first time aboard the colt after riding Firing Line in the first two legs of the Triple Crown. 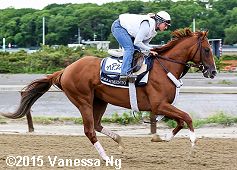 Frammento continued to familiarize himself with his Belmont Park surroundings Thursday morning. The chestnut son of 2008 2-Year-Old Champion Male Midshipman galloped around Belmont's training track and schooled in the starting gate for Hall of Fame trainer and two-time Belmont Stakes winner Nick Zito.

"He got in Tuesday afternoon and he's doing great," Zito said. "He galloped and I stood him in the gate and schooled him a little bit and he was fine. He looked beautiful. The other two I took to the training track so I figured, why not?" Zito's "other two" were Birdstone and Da' Tara, his longshot Belmont winners who respectively spoiled the Triple Crown hopes of Smarty Jones in 2004 and Big Brown in 2008. 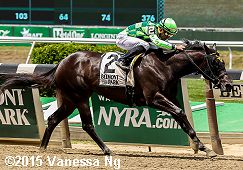 The first stakes race of the Belmont Stakes Racing Festival was the $250,000 Astoria Stakes for 2-year-old fillies sprinting 5 1/2 furlongs on the main track. Originally 6 were drawn, but only 4 started after 2 scratches, one of which was Tonasah who dumped her rider and ran free around the track delaying the start of the race. Decked Out was the 7-10 favorite iver 7-5 Moment is Right and 6-1 One Minute. Jockey Joel Rosario sent Moment is Right to the lead immediately and she set fractions of 22.23 and 45.67 while as many as 4 lengths in front of Decked Out, in turn 2 lengths ahead of One Minute. Entering the stretch Decked Out attempted to close the gap but the four horses held position at every call, with Moment is Right prevailing by 1 1/2 lengths in 1:04.77 over the fast track. It was a long 5 lengths back to One Minute third. 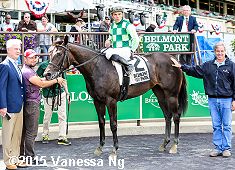 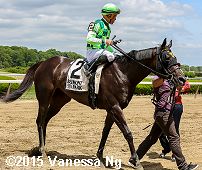 Left: Moment Is Right in the winner's circle. Winning trainer Wesley Ward said, "It was a short field but she showed a lot of heart, you know. She busted out there, and when (Decked Out) came by her, she dug right in and went by her so we're excited. She's been very well schooled, she's never had an issue, never had any problems. Probably Saratoga is next for her, we'll look there, maybe one of the first couple of stakes they got there and kind of take a look at it."

Right: Moment is Right circles after the race. Winning jockey Joel Rosario said, "She broke nicely and she has speed so she went right to the lead. It's 5 ˝ furlongs, so it's short a distance, but you always have to save a little bit for the end. When she saw (Decked Out) coming to her, she responded and ran again. It was a really good race for her. She doesn't look like she goes that fast. She's got a long stride. She covers a lot of ground, but she never looks like she's going that quickly. 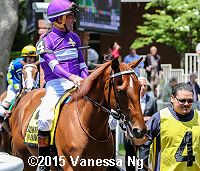 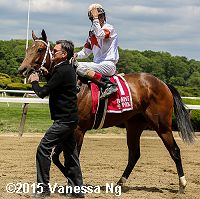 Left: Second place finisher and beaten favorite Decked Out in the paddock before the race. Jockey Kent Desormeaux said, "This filly is gonna enjoy more real estate and I had her off her feet just trying to keep up with (Moment is Right). I don't think I would have challenged her even if I attempted to be closer but from the 1/4 pole to the 1/8 pole I didn't think I could lose. I just got to the winner and the winner had something left and Keith's horse is a stable filly, she kind of just kept to the task but more to come."

Right: Third place finisher One Minute returns after the race. The 6-1 third choice raced 3rd 5 lengths off the pace under John Velazquez but failed to rally finishing 3rd beaten 5 1/2 lengths. The Steve Asmussen trainee improved her record to 1 win, 1 second, and 1 third in 4 starts, earning $62,700 for owners William and Corinne Heiligbrodt. 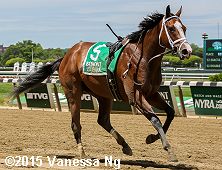 Tonasah delayed the start by running around the track for over 10 minutes after dumping her jockey. After several trips around the track, she finally tired enough that the outriders could catch her. 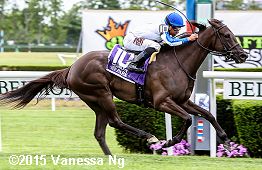 The second stakes race on Thursday was the $150,000 Intercontinental Stakes for older fillies and mares sprinting 7 furlongs on the turf. Marbre Rose was sent off as the 9-5 favorite in the field of 11 over 9-2 Distorted Beauty and 5-1 Zindaya. Luis Saez sent 32-1 Believe in Charlie to the lead and she set fractions of 23.28 and 46.61 while pressed by Zindaya. At the top of the lane Zindaya took over the lead through 3/4 in 1:10.05, and drew off to win by 2 1/4 lengths over late-running Marbre Rose in 1:22.17 over the good course. It was another 1/2 length back to Distorted Beauty third. 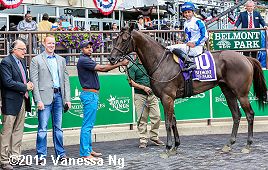 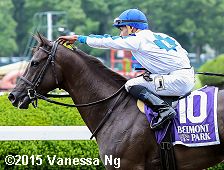 Left: Zindaya in the winner's circle. Winning trainer Christophe Clement said, "I told Manuel before the race to just be careful with the pace scenario, it's not the same - it's not a six furlong race anymore. I thought 7/8 was fine, she ran a mile last year in California, she almost got the mile so I was pretty sure she could get the 7/8 today."

Right: Zindaya returns after the race. Winning jockey Manuel Franco said, "First, I want to thank the owner and the trainer for the opportunity. I just followed Mr. Clement's instructions. He said if someone wants to go, just sit behind them and save the horse until the very end, because today is seven furlongs and she's won a six. We did it. I feel comfortable with her. I know her and she's a nice filly." 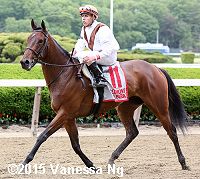 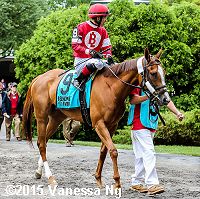 Right: Third place finisher Distorted Beauty heads out of the paddock before the race. The 9-2 second choice raced 10th early under Jose Ortiz, then rallied to get third beaten 2 3/4 lengths. The Bruce Levine trainee improved her record to 5 wins, 2 seconds, and 1 third in 10 starts, earning $289,678 for owner Bloodlines Racing Partnership.