On the Belmont undercard some of the top handicap horses of the east, including several Triple Crown contenders from past years, met up in the Grade 2 Brooklyn Handicap, a 1 1/8 mile trip around one turn of the spacious Belmont Park main track. Nine went to post in the $250,000 event, with Gygistar sent off as the 2-1 favorite over 5-2 second choice Funny Cide and 3-1 third choice Limehouse.

Jockey Eibar Coa was loose on the lead down the backstretch with 39-1 longest shot on the board Rogue Agent through quick fractions of 23.67 and 46.28, as John Velazquez kept Limehouse 3 lengths off the pace in second. Turning for home, Rogue Agent was through and Limehouse inherited the lead through 3/4 in 1:10.01. Favorite Gygistar, who tracked the leaders in third early, was asked for run by Javier Castellano entering the stretch but was left with too much to do, as Limehouse easily held his 1 1/2 length advantage through the lane to prevail in a time of 1:46.69. It was 2 more lengths back to 23-1 longshot Cuba in third. However, Cuba was disqualified and placed 5th due to interference with Funny Cide entering the far turn, moving 17-1 shot Royal Assault into the show spot and Funny Cide into fourth. 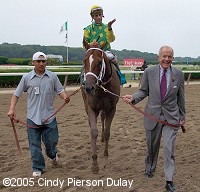 Cot Campbell of Dogwood Stable leads Limehouse toward the winner's circle. Winning trainer Todd Pletcher said, "He was training better here, and the one-turn mile and an eighth seemed to fit him well. I didn't seem to think there was a lot of speed in here, and I thought being close would be good. I thought the track had been playing to that. I wasn't concerned when Johnny (Velazquez) moved a little early. I could see the way that Johnny was riding that he thought he had a lot of horse." 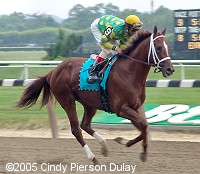 Limehouse gallops off in the post parade. Winning jockey John Velazquez: "The plan was to stay close. We wanted to go out of there from the outside and then get a little to the inside and save ground. When the other horse dropped in there (to the rail) I took him out a little and he was fine. From there on, he was a gamer. Every time they came to him, he gave them a little more." 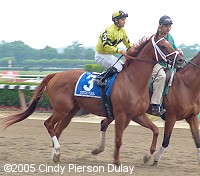 Second place finisher and beaten favorite Gygistar in the post parade. His jockey Javier Castellano said, "It was a pretty good race. We had opportunities, and he never gave up. We were second-best, and there's not much else to say." 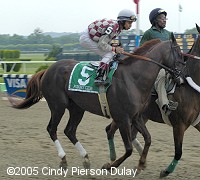 Fifth place finisher Funny Cide in the post parade. His trainer Barclay Tagg said, "I'm not happy about the finish. He came into the race absolutely perfect and strong. He was running well, and then I saw Jose (Santos) pull back. He damn near fell down. Jockey Jose Santos said, "We were in good position and he was running his race. When Norberto (Arroyo, aboard Cuba) came in on me going around the far turn, I had to pull back. That did us in." 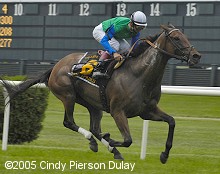 The $300,000 Just A Game Breeders' Cup Stakes saw a Grade 2 group of older fillies and mares travel 1 mile on the Widener turf course. Defending champion Intercontinental was sent off as the 4-5 favorite, but 8-1 shot Sand Springs pulled off the upset, leading at every call to wire the field in a time of 1:33.05, finishing 2 1/2 lengths clear of the favorite. It was just 1/2 a length back to 9-2 third place finisher Wonder Again. 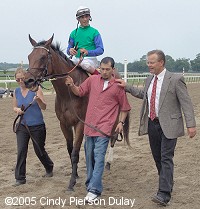 Trainer Bill Mott with Sand Springs after the race. Mott said, "She's tough to handle in the morning and tough to ride in the afternoon. But looking back, this was all well worth it. I know that Johnny (Velazquez) is used to handling tough horses, so I felt comfortable with him being on this mare. I was concerned about the pace, but she relaxed and was racing within herself. I was more impressed with the way she opened up at the end. I don't know where I will send her next. I'll have a better idea when she goes back to the track in three of four days." Winning jockey John Velazquez said, "I wanted her to be wherever she was comfortable. If you try to fight her, she tries to run off and drifts out. Into the turn, she came in. She was very comfortable. Once she got into a comfortable rhythm, she was fine. When I asked her to run, she was there for me." 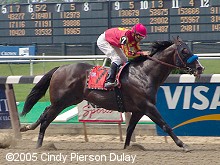 The Grade 2 True North Breeders' Cup Handicap featured older horses sprinting 6 furlongs on the main track for a $200,000 purse. 6-1 shot Woke Up Dreamin led from gate to wire, shaking off the 5-2 favorite Smokume after a front-end duel down the backstretch to win by 2 lengths over the late running 25-1 shot Voodoo, in a time of 1:08.38. 5-1 shot Mass Media was third and favorite Smokume faded to fourth. 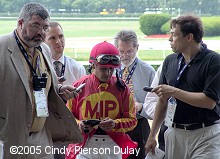 Winning jockey Mike Smith surrounded by a horde of media. He said, "He ran really, really well. Bob (Baffert) said that getting out of the gate had been a problem for him. He's a big, heavy-set colt, but I got him out and he settled and went really well." John Terranova, who oversees trainer Bob Baffert's New York operation, said, "Bob sent him in here doing wonderfully, and everything went right for him today. Mike (Smith) got him out of the gate good, which has been a problem, and it kept him going in the right direction. I'm glad the heat and nothing else bothered him today." 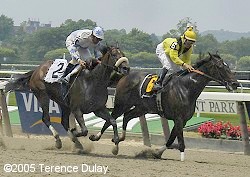 The stakes action on Belmont day kicked off with the $70,000 White Carnation, an overnight stake for older fillies and mares that have never won a stakes race in 2004 or 2005. 2-1 second choice Judy Soda went gate to wire to finish in front by 1/2 a length in 1:42.91 for the 1 1/16 miles, but was disqualified and placed second for interference in the stretch, handing the win over to 7-1 shot Madonna Lily. 6-5 favorite Strategy was third. Winning jockey Eibar Coa said, "He (Norberto Arroyo Jr. aboard Judy Soda) came out a little bit. I can't tell you if I was going to go by him or not. My filly was very small compared to her, so when he bumped me, he really got my horse off balance."