A crowd of 62,274 came out to Belmont Park for the third leg of the Triple Crown, the Grade 1 Belmont Stakes. Despite the lack of a Triple Crown possibility this year, fans were there to witness the rubber match between Kentucky Derby winner Giacomo and Preakness winner Afleet Alex. Afleet Alex was sent off as the 6-5 favorite and Giacomo the 5-1 second choice. Nine other colts entered to challenge them, and the betting public was quite undecided between them, with the longest shot Watchmon going off at just over 20-1.

The sky had turned dark with rain clouds when the field got underway but thankfully the rain held off. 15-1 shot Pinpoint went to the front and battled with 16-1 shot A.P. Arrow through easy fractions of 24.47, 48.62, 1:12.92, and 1:38.05 over the fast main track. Mike Smith kept Giacomo in stalking position in fifth early, while Afleet Alex was kept under wraps by Jeremy Rose, who took him to the inside right away to save ground on the clubhouse turn and allowed him to relax in 8th for the long trip down the Belmont Park backstretch.

Going around the far turn, the pacesetters dropped out of contention as Smith asked Giacomo to make a bid for the lead. Entering the stretch, Giacomo poked a head in front, getting the 1 1/4 miles in 2:05.04, but the Preakness winner was already rolling under a hand ride by Rose. Afleet Alex went right by Giacomo at the 3/16 pole and surged to a 6-length lead at the 1/8 pole. 12-1 shot Andromeda's Hero made a late charge from 10th early on, but was left with too much to do. Afleet Alex hit the line 7 lengths clear of Andromeda's Hero, in a time of 2:28.75 for the 1 1/2-mile classic. It was another 6 3/4 lengths back to 20-1 maiden Nolan's Cat, who rallied from dead last to get in the money. Giacomo steadily tired through the lane and finished a disappointing seventh. 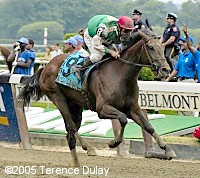 Just after the break with Pinpoint on the lead and Aleet Alex towards the back just inside Chekhov. John Velazquez, aboard early leader and eventual last place finisher Pinpoint said, "There was no secret, I was supposed to be on the lead. I was right were I wanted to be, but we couldn't keep up with the other horses with a quarter to go." 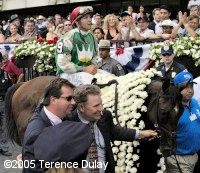 Afleet Alex makes the walk down Victory Lane led by trainer Tim Ritchey and owner Chuck Zacney. Winning jockey Jeremy Rose said, "He was the best horse. I knew that if I didn't do something stupid, I was going to win this race. He's just that good. He should be a Triple Crown winner, but I messed up or whatever. I knew I had the fastest quarter mile when I needed it (24.50, fastest final quarter mile since Arts and Letters, 1969). The only thing that could get him beat was me, so I stayed out of his way. He's won from five-eighths to a mile and a half. I say I messed up because I had the best horse. You can't blame Tim (Ritchey) and you can't blame Afleet Alex. So, if you have to blame someone, blame me." 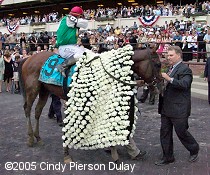 Afleet Alex in the winner's circle. Winning trainer Tim Ritchey said, "We expected this kind of performance today. I wasn't surprised he was that far back, but when he got rolling, it was a lot of fun. I thought Jeremy rode tremendously. He saved ground like we discussed early in the race. He dropped in. He was sitting perfect. The whole field wasn't -- one horse was back a little ways, the rest of the field maybe eight, nine lengths, separating the whole field. I kept saying to myself, patience, and Jeremy was patient as could be. You could tell the horse just started to pick up horses on his own. Jeremy wasn't even riding him. When he kind up went outside of Giacomo, Jeremy asked him a little bit and he accelerated and went with authority." 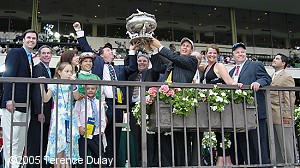 All the happy connections with the Belmont trophy. Chuck Zacney of winning ownership group Cash Is King Stable said, "Unbelievable. Once again, coming in here, getting two out of three of the Triple Crown legs, fantastic, I guess as I watched the race and I saw another terrific ride by Jeremy, and we're thrilled to death to be here. I've got to give all the credit to Tim. I mean, from day one, he took this horse, took him under his wings, had the horse ready and anybody who questioned whether or not this horse could go a mile and a half, he proved it rather convincingly today." 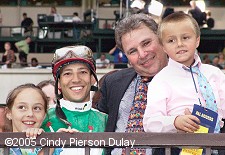 Trainer Tim Ritchey and jockey Jeremy Rose with the two Alex's who Afleet Alex is named after. 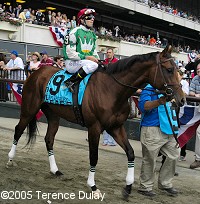 Afleet Alex heads to the track for the Belmont post parade. Jockey Jeremy Rose said, "I don't want to hear any more criticism about my horse. Knock me, but don't knock him He's one of the best we'll see in a long time." 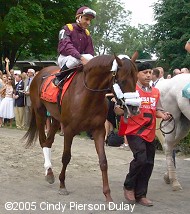 Second place finisher Andromeda's Hero in the paddock before the race. His jockey Rafael Bejarano said, "My horse broke really good this time. So, I stayed comfortable in good position, trying to stay close to Afleet Alex. When he moved at the three-eighths pole, I followed him, and when I asked my horse at the quarter pole, my horse started running strong. But Afleet Alex just ran away." 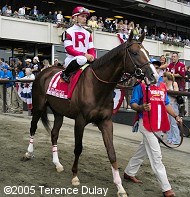 Third place finisher Nolan's Cat heads to the track for the post parade. His trainer Dale Romans said, "If this horse didn't have some unfortunate events along the way, I think he would have been a contender throughout the entire Triple Crown. I was real pleased with the way he ran. We didn't have the pace that we had last year in this race. But he still ran good into a slower pace. He ran huge. He'll get better and better. He's the best maiden in the country. It's going to be hard to pick out a spot for him because he likes these longer races. I think we might try turf, it will give us more options. We may just end up with another Kitten's Joy down the road." 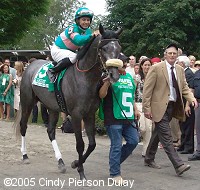 Kentucky Derby winner Giacomo with his trainer John Shirreffs in the paddock before the Belmont who finished 7th. Mike Smith, aboard seventh place finisher Giacomo, said, "Down the backstretch, I could hear him make a loud, roaring noise. I knew he had (displaced his palate). So, I got him to the outside and dropped his head - a lot of times that will help get it back. But he never did. At the quarter-pole, he let out another one. Galloping out was the same. When a horse is doing that, he is not breathing right. I won't take anything away from Afleet Alex. He ran great today."