The Friday before the Belmont Stakes may not be one of the most important on the New York racing calendar, but the two Grade 3 stakes events scheduled entertained the crowd of 11,730, a number likely a bit inflated due to the stadium blanket giveaway, with some of the most exciting stretch runs in recent memory. Both races ended with a three-horse photo finish for the win, with Javier Castellano's mounts getting the lucky head bob each time. 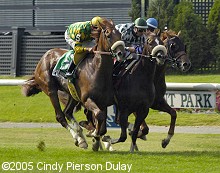 The $114,700 Hill Prince Stakes featured 3-year-olds going 1 1/8 miles on the inner turf course. Nine went to post, with Crown Royal American Turf winner Rey de Café sent off as the lukewarm 2-1 favorite. 7-1 shot Tinseltown and 32-1 longshot Better Than Bonds dueled while setting a pace of 24.87, 48.88, and 1:12.71 over the firm course, and then dropped out of contention as the race played into the hands of the closers. 4-1 second choice Classic Campaign, who had stalked the pace in fourth earlier, seized the lead inside the 3/16 pole and was 3 lengths clear with an eighth to go. Favorite Rey de Café closed strongly from sixth early, and held off another late challenger, 19-1 shot Prince Rahy to win by a nose between horses, completing nine furlongs in 1:49.25. It was just a neck back to Classic Campaign in third. Second place finisher Prince Rahy bumped the favorite at the 1/16 pole, but since Rey de Café finished in front, the stewards did not have to adjust the order of finish.

Full results chart for the Hill Prince Stakes from DRF 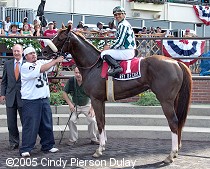 Rey de Cafe in the winner's circle. Winning rider Javier Castellano, who swept both stakes races on the day, both by photo finish, said, "When you're riding, you don't realize when you are right at the wire. I wasn't sure if I had it. Someone hit me behind. My horse really took a bad step. I looked at Coa (jockey Eibar Coa on Prince Rahy) and he said `I'm sorry, I'm sorry.' It wasn't his fault. I had some good horses to ride today, and I want to thank the trainers that put me on them."

Trainer Rusty Arnold said "He's small and was carrying more weight the others. I am really proud of him because he is a fighter. I think if you add up all of his turf races he has probably been beaten a length altogether. He's improving. I was questioning whether or not he wanted a mile and an eighth. He did it. It's hard to tell because he just does enough to win. We're going to ask him for a little bit more." Rey de Café will go next in the $750,000 Virginia Derby at Colonial Downs on July 16. 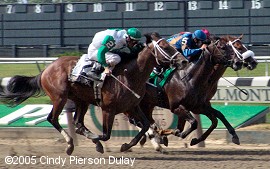 The $105,100 Flash Stakes saw a compact field of five 2-year-old colts sprint 5 furlongs on the main track. 5-2 second choice Beacon Shine and favorite Speed of Sound battled on the front end around the turn and into the lane through a quarter in 21.87 and half in 45.21, with the favorite taking the inside route. Then with a furlong to go, late-running 7-1 shot Union Course closed with a rush down the center of the track. The three noses hit the wire together, and the photo finish determined that Beacon Shine, the middle horse of the three, got his nose down on the line first. He completed the distance in 58.39 over the fast track. Union Course was second and the favorite Speed of Sound was third.

Full results chart for the Flash Stakes from DRF 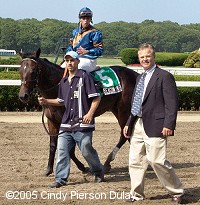 Trainer Bill Mott with Beacon Shine heading to the winner's circle. Winning jockey Javier Castellano said, "I had a lot of confidence in the horse. The first time, he was very impressive. The second time, he had a trouble trip at Churchill Downs; it was Kentucky Derby day and he was nervous because there were a lot of people in the paddock. He settled down good today. He was very relaxed. I knew I had to beat Speed of Sound. I did it. I put my horse right on him."

Winning trainer Bill Mott said, "They were `ding-donging' there, and if they were going further than five furlongs, I probably wouldn't have liked it too much. This is the two-year-old type. He's probably the first one I've had like this in a while. He's bred to be rapid, he's built that way and he is. He is a fun horse. We have no plans at this time. We'll wait and see how he is."