The 2019 Breeders Crown, North American harness racing's year-end championships, were decided at Woodbine Mohawk Park in Campbellville west of Toronto. Unlike past renewals, this year the 4 races for juveniles were run on Friday night with the remaining 8 championship races run on Saturday. Rain fell during most of Saturday's card, the temperature holding around 8 C (41 F), with the fields encountering tailwind gusts of 32 km/h (20 MPH) through the stretch. All Breeders Crown races are contested at the standard 1 mile distance, a 2-turn trip over Mohawk Park's 7/8 mile stonedust track rated fast initially but downgraded to "good" for the 3-Year-Old Colt and Gelding Trot. 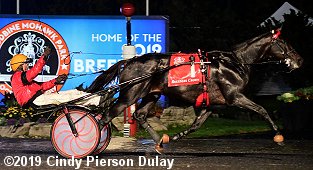 The finale of the 2019 Breeders Crown was the $500,000 (all purses U.S.) Open Trot, with a field of 11 older horses behind the starting gate. As expected French invader Bold Eagle was sent off as the 9-5 favorite off his second place finish in the Grand Prix de la Federation Regional du Nord. In to challenge him included 7-2 second choice Atlanta, the mare taking on males after disappointing 7th in the Yonkers International, and 9-2 third choice Six Pack, winner of the Allerage Farms Trot. Driver Louis Philippe Roy sent 13-2 Lindy the Great to the lead first time by through an opening quarter of 26 2/5 before driver Brian Sears moved Bold Eagle wide to gain the lead through a half in 55 2/5 and 3/4 in 1:24 while stalked by Six Pack. Six Pack attempted to close the gap late but Bold Eagle cruised the rest of the way to win by 2 lengths in 1:52. It was another 1/4 length back to Atlanta third. 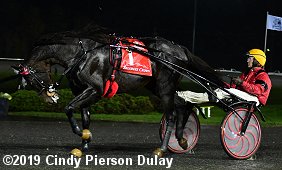 Left: Bold Eagle in the winner's circle. Winning driver Brian Sears said, "He made a strong move down the backside, which I thought might take something out of him because he did get used very hard. But he showed his class and dug in down by the wire to hold on."

Right: Bold Eagle looks frisky as he warms up before the race. Winning owner Pierre Pilarski added, "We"re very satisfied. It was a long trip to come here. I promised (Hambletonian Society president) John Campbell two years ago and it worked out this year." 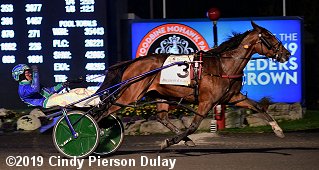 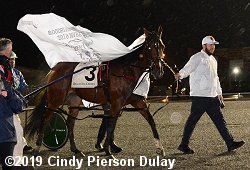 Kicking off Breeders Crown Saturday was the $300,000 Open Mare Pace. Defending champion and Lady Liberty Stakes winner Shartin N was sent off as the 2-5 favorite over 5-2 Caviart Ally, winner of the Milton and the Allerage Farms Open Mare Pace, and 9-1 Youaremycandygirl, 3rd in a Preferred event last out. 10-1 Kissin in the Sand was quickest away through an opening quarter of 25 4/5 before driver Tim Tetrick sent Shartin N to lead down the back through a half in 55 and 3/4 in 1:22 3/5. Shartin N looked homefree midstretch but Caviart Ally, 4th early, closed with a rush with driver Andrew McCarthy to win by 2 1/2 lengths in 1:49 3/5. It was another 1/2 length back to Kissin in the Sand third. 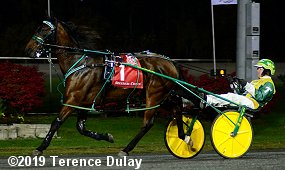 Left: Caviart Ally in the winner's circle. Winning driver Andrew McCarthy said, "It's been a pretty good rivalry (with Shartin N) but Ally really loves this time of year. She just excels in the fall. I pushed the pace a little, she likes to be first over so she seems to be agreeing with it." 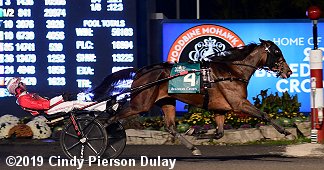 The $325,000 Open Mare Trot featured a field of 10 with Allerage Farms Open Mare Trot winner Manchego sent off as the 1-2 favorite over 7-2 Plunge Blue Chip, winner of the Ms. Versatility, and 10-1 Hannelore Hanover, 2nd in the Indiana Sires Stakes. Plunge Blue Chip was quickest away through an opening quarter of 26 1/5 before driver Dexter Dunn sent Manchego to lead through a half in 55 3/5 and 3/4 in 1:23 4/5. Turning for home, Manchego drew off, openin up a 4 1/4 length advantage midstretch. 27-1 Emoticon Hanover rallied to no avail as Manchego cruised to win by 6 1/4 lengths in 1:51. It was another 1/4 length back to Plunge Blue Chip third. 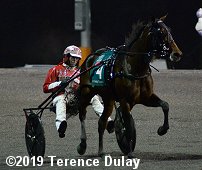 Left: Manchego in the winner's circle. Winning driver Dexter Dunn said, "She"s just exploded the last half of the season. She felt great once again tonight."

Right: Manchego returns after the race. 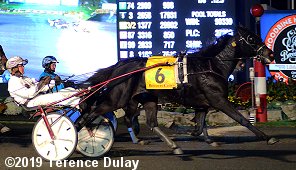 A full field of 10 contested the $500,000 Three-year-old Filly Trot, despite elimination winner Millies Possesion failing to make final entry due to an injury. New York Sires Stakes runner-up Winndevie was sent off as the 3-2 favorite over 5-2 The Ice Dutchess, 2nd in the Kentucky Filly Futurity, and 3-1 When Dovescry, 3rd in the Kentucky Filly Futurity. 9-1 Only Take Cash was quickest away through an opening quarter of 26 2/5 before Yannick Gingras put The Ice Dutchess in front through a half in 56 3/5 and 3/4 in 1:25 3/5. The Ice Dutchess held a short lead to the 1/8 pole but Winndevie, 7th early with Brian Sears, came out wide for room and rallied to outfinish When Dovescry by 3/4 length in 1:53. It was another 1 1/4 lengths back to The Ice Dutchess third. 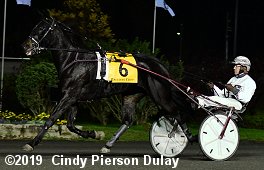 Left: Winndevie in the winner's circle. Winning driver Brian Sears said "There was a lot to like about her last week (elimination), I didn't race her too hard but I was happy with the way she raced and we drew a decent post. She's an honest filly, she came home big last week and did it again." 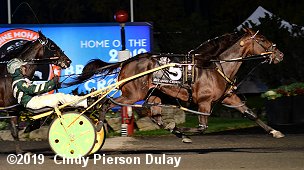 The $550,000 Three-year-old Filly Pace featured a field of 10 with Jugette and Glen Garnsey Memorial winner Warrawee Ubeaut bet down to 1-5 favorite over 7-1 Tall Drink Hanover, winner of the Simcoe, and 10-1 Treacherous Reign, winner of the Bluegrass Stakes. Treacherous Reign led first time by through an opening quarter of 25 3/5 before driver Yannick Gingras put Warrabee Ubeaut up front through a half in 54 4/5 and 3/4 in 1:23 1/5. In the lane, Warrabee Ubeaut opened up a 2 1/4 length lead as Tall Drink Hanover closed from 5th. Warrawee Ubeaut easily held her off to win by 1 1/4 lengths in 1:50 2/5. It was another 3/4 length back to 46-1 Stonebridge Soul third. 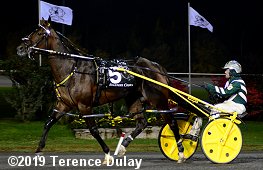 Left: Warrawee Ubeaut in the winner's circle. Winning driver Yannick Gingras said, "I talked to Ron (Burke) before the race and we didn"t want to have to go hard into the wind. It didn"t work that was. She relaxed so good in the third quarter and I think that"s what won the race for her." 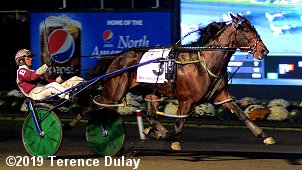 The $500,000 Open Pace featured a field of 10 older hores, with defending champion and Dan Rooney winner McWicked sent off as the 6-5 favorite over 9-2 Jimmy Freight, winner of the Dayton Pacing Derby, and 5-1 American History, winner of the Quillen Memorial. Driver Joe Bongiorno sent American History to lead through an opening quarter of 25 4/5 before Matt Kakaley moved 15-2 Dorsoduro Hanover to the front through a half in 53 4/5 and 3/4 in 1:21 3/5. Dorsoduro Hanover continued to lead to the 1/8 pole but American History fought back late to win by 2 lengths in 1:48 3/5. It was another 1/2 length back to 12-1 Always a Prince third, and 1 1/2 lengths back to favorite McWicked fourth. 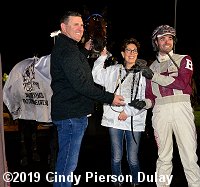 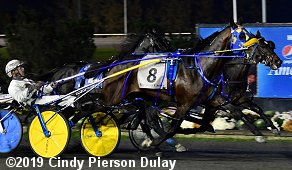 Left: American History in the winner's circle. Winning trainer Tony Alagna said, "He"s matured and now he is able to go with these guys." Driver Joe Bongiorno added, "No words can describe how I feel winning. I"m grateful for all the help from Tony." 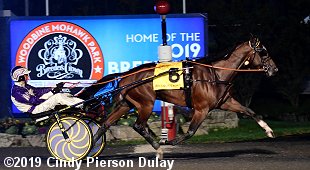 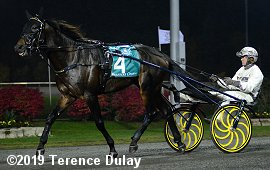 Left: Gimpanzee in the winner's circle. Winning driver Dave Miller said, "I was planning on leaving. I gave him a rough trip but he"s so tough." Trainer Marcus Melander added, "I don"t think it would matter if it was a snowstorm and minus 20. He wouldn"t have a problem with it."

A field of 10 contested the $600,000 Three-year-old Colt Pace, with Tattersalls Stakes division winner Bettors Wish sent off as the 7-10 favorite over 4-1 Captain Crunch, winner of the Cane Pace, and 5-1 Dancin Lou, winner of his division of the Tattersalls. 78-1 Semi Tough led first time by through a quarter in 26 2/5 before driver Dexter Dunn moved Bettors Wish wide and to the front through a half in 55 2/5 and 3/4 in 1:23. Bettors Wish opened up a 1 1/2 length advantage at the 1/8 pole but Dancin Lou, 4th early with driver Andrew McCarthy, rallied to win by a head in 1:50 2/5. It was another 1 3/4 lengths back to Captain Crunch third. 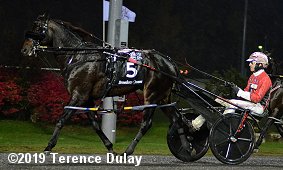 Left: Dancin Lou in the winner's circle. Winning driver Andrew McCarthy, celebrating his 4th Breeders Crown win this year said, "I thought I did (win), I had the momentum on the outside and I was hoping I did. I had a little trouble in the last turn getting his momentum going, but once I got him rolling there what a tough horse, he digs and digs. I didn"t expect four (wins) but I was definitely hoping for a couple." 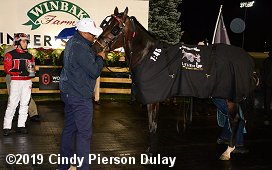 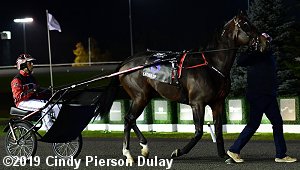 Before the eight Championship races on Saturday, there was a retirement ceremony for Lather Up. The 2018 North America Cup winner tied Always B Miki's world record 1:46 mile in the Graduate Stakes at the Meadowlands, and then set a world record 1:59 2/5 for 1 1/8 miles. Arguably the fastest horse in harness racing history, he set six track records at ages 2, 3, and 4. His final start he finished 2nd in the 2019 Canadian Pacing Derby at Woodbine Mohawk Park, finishing his career with career earnings of $1,735,623, winning 23 of his 37 starts. He will stand stud duty at Diamond Creek Farm"s new facility in Davenport, New York. At right, a farrier is removing his shoes which were given to his driver Montrell Teague (standing to the left).