On Saturday night, Woodbine Racetrack hosted all twelve of the Breeders Crown championship races for all the divisions of trotters and pacers with total purses of $7.6 million. The track was rated as good at the beginning of the card, but after heavy rain during races 9 and 10, it was changed to sloppy. There was intermittent rain all evening in addition to the one period of heavy rain and the temperature was around 50 degrees. Each race was carded at the standard 1 mile distance, two turns around the 7/8 mile track. 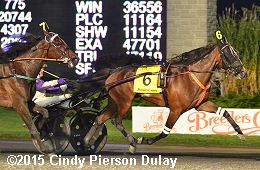 The Breeders Crown got underway Saturday at Woodbine Racetrack with a stirring half-length victory by 9-1 D One and catch driver Brian Sears in the $250,000 Open Mare Trot. After 9-10 favorite Frenchfrysnvinegar took the lead through a half in 27 seconds and 3/4 in 56 1/5, Sears moved D One to the outside for room. After 7/8 in 1:40 3/5, D One took over the lead for good, outfinishing the favorite in 1:55 2/5. It was another length back to 30-1 longshot Mystical Starlight third. 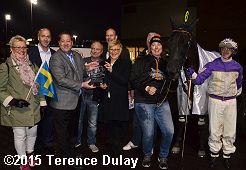 D One in the winner's circle. Driver Brian Sears said, "I didn't really know what to expect, but they thought pretty highly of the (mare). I was able to get her somewhat into the race from the 10-hole, I ended up third or fourth over, and she really responded. She's a very nice filly. There is some wind playing a little bit out there. When horses get used in the wind, they kind of know it. The trip worked out good and she fired home strong." 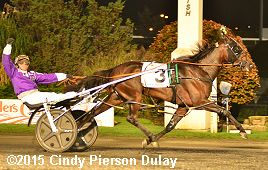 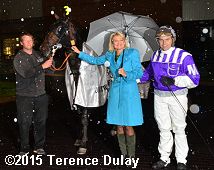 Pure Country in the winner's circle. Winning trainer George Teague Jr. said, "This one here seemed a little bit special right from the day of breaking her. She's just an overall complete horse. Speed, mannerisms. She was a little bit harder early on, but corrected by different equipment. She set up well for the end of the season because she was a little bit aggressive early." Driver Andy Miller added, "Last week she got a nice trip and just exploded off of cover, but tonight she kind of roughed it for a bit and then she just dug game right to the wire. The conditions weren't ideal tonight, but she dug right in and was really tough." 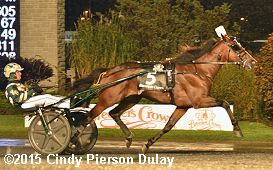 The $600,000 Breeders Crown 2-year-old Colt and Gelding Trot featured a small but classy field of 6, with defending champion Southwind Frank sent off as the 3-4 favorite over European invader and 9-5 second choice Commander Crowe, and 7-2 third choice Mister Herbie. Driver Christophe Martens sent Commander Crowe to the lead through fractions of 27 2/5, 55 4/5, and 1:24 3/5. Down the lane, driver Tim Tetrick and Southwind Frank, who pressed the pace in second the whole way, and Mister Herbie, third early, gained steadily on the pacesetter. Southwind Frank took over the lead at the 1/8 pole through 7/8 in 1:38 4/5. He finished 1 1/4 lengths in front of Mister Herbie in 1:52 3/5. It was another 1 1/4 lengths back to Commander Crowe third. 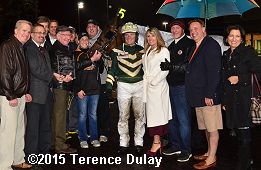 Southwind Frank in the winner's circle. Trainer Linda Toscano said, "I can't dream this big," she said. "Without question he's the best horse I've ever had. I didn't know that he could do that (race parked the mile) but as long as he has a target he wants to go past. What this horse has overcome to get to this point, horses can't do and he only knows one thing -- and that's to win," she said. "He loves it, he's a great horse. He deserves every accolade he gets. He's a great horse and Timmy and he gets along super. I give credit to everybody involved. It's a team effort; the caretaker lives with him, the veterinarian that got him through his sickness lives with him. This year is a culmination of everybody working together and getting him here. I just went along for the ride." 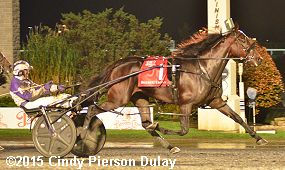 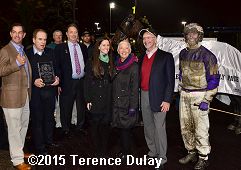 Divine Caroline in the winner's circle. "(In last week's elim) My mare needed a good braven-up trip and she got it," explained driver Tetrick. "She really responded well off that. I'm just really tickled with this mare. She deserves a Breeders Crown. She got hurt last year and didn't make it, but she made up for it tonight. I knew there were some good horses behind me and I was first up into the wind. You never know. My mare raced great. She held them off and she's a champion." 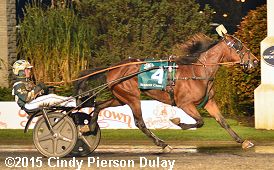 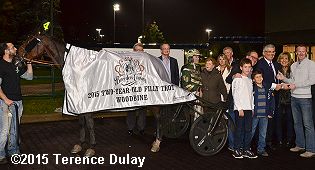 All The Time in the winner's circle. Driver Yannick Gingras said, "I was coming first up and she was kind of wanting to take off on me around the last turn. I just turned her loose and she opened up 10 on the field in a matter of strides. She became available three starts ago and to be able to get a guy like (trainer) Jimmy Takter to ask you to drive her, a great filly like this that's already proven to be a great filly, to me that's the highlight. You get drives like that, you can't help but win races." 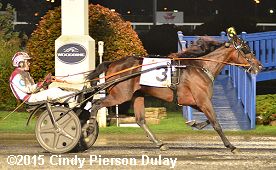 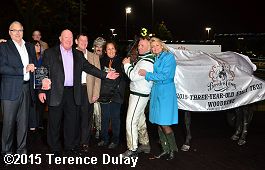 Wild Honey in the winner's circle. "She raced very big tonight," said trainer Jonas Czernyson following the victory. "Yannick (Gingras) came first up with her and I thought that wasn't going to work, but she did a very good job tonight and I'm very proud of her. She likes to hunt, she likes to have a target -- that's when she races the best." 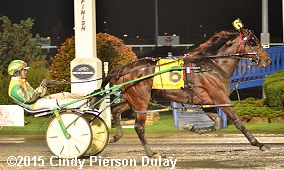 A field of 10 contested the $600,000 Two-Year-Old Colt Pace, with Captaintreacherous sent off as the 3-10 favorite over 7-1 Vegas Vacation and 8-1 Apprentice Hanover. Driver Ron Pierce sent 100-1 outsider Urbanite Hanover to the front through fractions of 26 3/5 and 55 2/5. On the far turn Captaintreacherous moved up to pass the tiring pacesetter through 3/4 in 1:23 2/5. The favorite held the lead to the furlong marker, but 17-1 Boston Red Rocks, 3rd early, closed to get the 1/2 length win over late-running 9-1 Wake Up Peter in 1:51 2/5. It was another 1/4 length back to Captaintreacherous third. 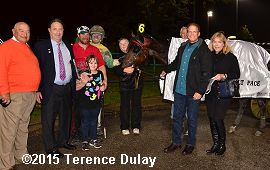 Boston Red Rocks in the winner's circle. Winning owner-breeder Susan Grange (Lothlorien Stable) said, "Not really (any pressure at 17-1). It was a lot easier this time. We deliberately bought Kikikatie to breed with Rocknroll (Hanover). We've kept all the colts. This one made it work. He (Gingras) has done an excellent job. I've always liked (Boston Red Rocks). He's had a bit of bad luck, but I always thought he had it. I've always thought he had a lot of heart." 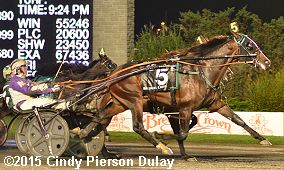 In the $600,000 Three-Year-Old Colt and Geldinng Trot, The Bank was sent off as the 11-10 favorite in the field of ten over 5-2 Dontyouforgetit and 7-2 Royalty for Life. Driver Tim Tetrick sent Royalty for Life to the lead on the cluhouse turn through fractions of 28 and 57 3/5. On the far turn, Dontyouforgetit gained the front while parked wide, getting 3/4 in 1:26 3/5. Midway down the lane, Dontyouforgetit broke stride as The Bank, 5th early, came through to win by 3/4 length over Royalty for Life in 1:56. It was a long 5 lengths back to 78-1 Murmur Hanover third. 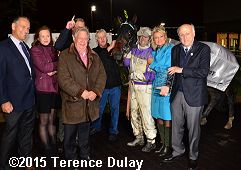 The Bank in the winner's circle. Driver Sylvain Filion said, "He's done everything we've asked him so far this year. He's just amazing. He gave me a little scare on the last turn. He got a little bumpy on me and I had to take ahold of him. But as soon as we hit the stretch he was gone. It feels sweet. It's just great." Trainer Dustin Jones added, "It's happened to us before and we took the cautious route with him. It paid off." 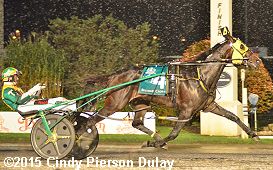 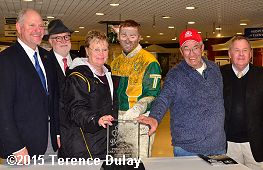 Freaky Feet Pete's connections pose with the trophy. Trainer Linda Toscano said, "It was one of those things where he always had white stuff coming out of his nose and he'd cough occasionally. Timmy and I talked about it when we were down in Lexington, and he said 'why not certify him?' I thought, we're going to race him next year as a four-year-old, it can't hurt. And I think it did more than can't hurt, I think it really did pick him up. 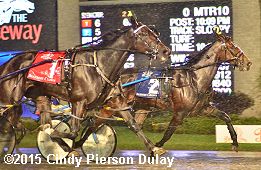 The $331,500 Open Mare Pace featured a field of 11 going the standard distance, with Drop The Ball sent off as the lukewarm 2-1 choice over 9-4 second choice Rebeka Bayama and 7-2 third choice Rocklamation. Driver Tim Tetrick sent defending champion and 6-1 fourth choice Colors A Virgin to the lead first time past the stands through a quarter in 26 1/5 before Rebeka Bayama took over down the backstretch, getting the half in 54 seconds and 3/4 in 1:22 3/5. At the top of the lane, Drop the Ball came on to take the lead through 7/8 in 1:36 1/5, but Colors A Virgin came back to win by 1 1/2 lengths in 1:50 1/5. It was another 1 3/4 lengths back to Rebeka Mayama third. 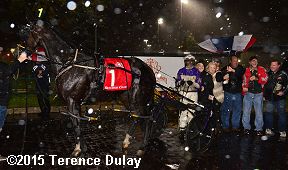 Colors A Virgin in the rainy winner's circle (notice the umbrella blown inside out). Driver Tim Tetrick, celebrating his fourth win on the card, said, "My mare's really tough, she likes being forwardly placed, either cut it or follow one that's going plenty fast. Today, Sylvain's mare (Rebeka Bayama) came and I let him go. I made him work at it a little bit. At the top of the lane I got lucky, squeezed out behind Yannick and in front of Brett Miller's horse (fourth-place finisher Camille). My mare did the rest of the work from there. She's tough as nails. Last week she got parked and this week she came back with a vengeance. She turns the page very quickly." 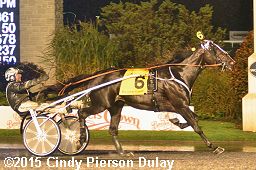 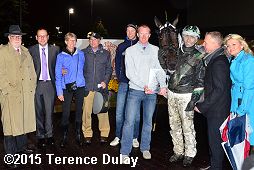 Creatine in the winner's circle. Driver Ron Pierce said, "I never even pulled his earplugs and I just chirped to him a couple of times. He did it all on his own. A monkey could have won with this horse tonight. I raced him pretty aggressively the first time I raced him (Simcoe Stakes) and he came up just a tad short. He was never stretched out before that race. I believe that if he'd have had a race under his belt over this track or Mohawk before that race, he'd have won it." 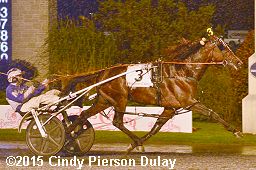 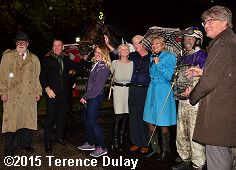 Always B Miki in the winner's circle. Driver David Miller said, "It worked out great. I left, fell right in the two-hole, got to move back, got a soft middle half there and the horse, he did the rest. I got back to the front and nobody even challenged me until the head of the stretch. By that time he was freshening up and he had a lot of pace." Trainer Tom Cancelliere added, "His foot was bothering him at the beginning of the season. We tried to race him through it, but some of the harder tracks seemed to bother him a bit and it took a little while to get it comfortable again. I have a great blacksmith who's been working with me all year, taking care of it. This is it for him for the year. It's hard to put him away, but we're going to do it anyway."