This story is copyright(c) by www.TheStickHorseRacing.Com and is being reprinted by permission of the author for Cindy Pierson Dulay's Horse-Races.Net ONLY.

We have a real treat for the fans of Horse-Races.Net and www.TheStickHorseRacing.Com . We recently had the opportunity to have a question and answer session with Billy Koch. In addition to being a very friendly and personable guy, Billy has been the inspiration and drive behind one of Racing's premiere Partnership Stables, Little Red Feather.

Billy gave us the heads-up on his feelings about the Breeders Cup Mile, and his outstanding Turf Superstar, Singletary. We were very happy to interact with Billy, and we are all pulling for Singletary to win in the Breeders Cup two years in a row. With his powerful late kick and strong closing power, Singletary should help provide a thrilling stretch run, on what we hope is his way to VICTORY! Best Luck from MC and Staff to Little Red Feather for the Mile ! 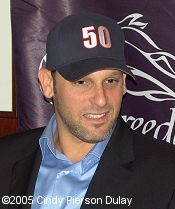 MC Introduction : Billy, Thank you for granting us this interview at The Stick Horse Racing dot Com, we are very happy to have your comments on the Breeders Cup Mile, and we hope that Singletary is a BIG Winner!

BK Responds : Thanks, Marc. Happy to be here. We hope we can shock the world again!

MC Question : Please give us a little background on Singletary. How did you find him? How much did he cost as a yearling? Is he the greatest horse you have ever been associated with?

BK Responds : Our trainer, Don Chatlos, found Singletary in January of his 2-year-old year. He was part of a three-horse package we purchased from Florida and he was actually the least desirable (financially speaking) of the three. We valued him at $30,000 when we bought him and YES, he is by far the greatest horse I've ever been associated with. The biggest winner prior to Singletary was a horse named Telly's Pop, who won the western Juvenile Triple Crown (Del Mar Futurity, Norfolk Stakes, California Juvenile Championship) in 1975. He was owned by my grandfather and Telly Savalas (Kojak).

MC Question : I'm sure everyone out in the racing world wants to know. How is the Big Guy training and what is his condition one week prior to the Breeders' Cup Mile ?

BK Responds : Singletary couldn't be training any better. He came out of the Oak Tree race in great shape and he'll be on a plane to New York on Tuesday.

MC Question : How would you compare Singletary with the Champion Turf Miler, Lure? If we could have a fantasy dream race, who do you think would win in a heads up Lure vs Singletary confrontation ? After all, Lure was a front runner, and Singletary is a deep closer, so it would be a thrilling stretch run. We certainly hope Singletary can repeat like Lure did in the Mile and bring home a smashing win for you.

BK Responds : Lure in his prime was unbelievable. One of my favorite horses. I think I'd have to give Lure the advantage just because of the pace scenario you mentioned. That being said, Singletary is not really a deep closer. Even that last race at Oak Tree was a little deceiving due to the small field. I think Singletary's best races (BC Mile '04) are when he's able to relax and stalk. Would be a cool match race though!

MC Question : Every year, we are besieged by European champion turf horses. This year is no exception. Are you concerned about the European horses in the Mile? We have Ad Valorem, Gorella, Majors Cast, Valixir, and Whipper all considering the Mile at Belmont. Everyone seems to think Valixir has the best form and chance to run big. Can any of these Euro stars really compete with Singletary?

BK Responds : Absolutely. The Euros have a big chance. Belmont's turf course and the European-like weather are sure to help. In fact, historically, Euros have done exceptionally well at Belmont - off the top of my head - Ridgewood Pearl and Royal Academy both won there.

MC Question : Leroidesanimaux is coming in off a big win in the Atto Mile at Woodbine. He is trained by Bobby Frankel, and looks very tough. Is this the horse to beat if you want to win the Breeders' Cup Mile ?

BK Responds : You have to say that "Leroy" is the horse to beat. He is a total specimen. He beat us up pretty good in the Kilroe earlier in the year but that was our first race after the Breeders' Cup and off a four month layoff. We had missed some time due to the rain and Singletary really wasn't himself. We've been wanting for the rematch ever since!

MC Adds : This is a great rematch for both of them. Go Singletary !

MC Question : Are there any other horses your concerned about in the Mile ?

BK Responds : To be honest, we take every horse in the race seriously. If you make it this far, you must be pretty good. Last year, people took us for granted and look what happened.

MC Question : We have heard that the Breeders' Cup Mile will be Singletary's final career race. What are the plans for him after his racing career is over ?

BK Responds : There is a good chance this could be his last race. We've been contacted by a handful of breeders and we will make a decision what to do after the race. We're very much looking forward to seeing little baby Singletary's running around.

MC Question : We know that many of the fans out there are interested in learning more about Racing Partnerships and Horse Ownership that is affordable and reasonable to their incomes. Can you give us some additional information about Little Red Feather Racing Partnerships?

BK Responds : We're very excited about some of our young horses and we're looking forward to Little Red Feather 2006. We're going to start ONE partnership for the whole year that will consist of horses from all arenas of racing (two-year-olds, claiming, pinhooking, Euros, etc.). Anyone can get involved. Just drop me an email at billy@littleredfeather.com and check out our website for more information.

MC Closing Comments : Billy, Thank you so much for granting us an interview and telling us about yourself and your star Miler, Singletary.

I wanted to tell you on behalf of our staff and myself, that we are rooting for Singletary in the Breeders Cup Mile, and we hope he wins big for you this Saturday !

We were very happy to have your comments and I'm sure many of our fans will be looking up Little Red Feather, and possibly joining you in the Winner's Circle for your next Champion Runner.

Thanks for having me on and thanks to the many of you who send emails with good wishes. Hopefully, Singletary can come through one more time and we'll give you guys a bigger celebration than last year!

All the best on your web-site (The Stick horse Racing dot Com) too.

Best Regards and Racing to All the Fans of Cindy Pierson Dulay's www.Horse-Races.Net, and www.TheStickHorseRacing.Com