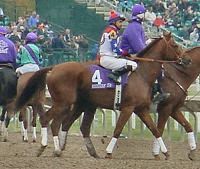 At the media luncheon today, trainer D. Wayne Lukas finally ended the suspense about whether Azeri will run in the Breeders' Cup Distaff or Classic. He said, "We're going to put this to bed right now. It's Texas, and Breeders' Cup is kind of a Texas Hold'Em type event. So, we're going to go all in. We're going to go in the Classic. We'll play our Queens and see what happens. Michael Paulson and I really agonized over it, we weighed the pros and cons. Late last night he decided he'd like to try the Classic. I back his decision 100% wherever he wanted to go. We've never had much fun in the shallow end of the pool anyhow so we're going to jump into right into the deep end and see what happens."

He continued, "We feel like we've found a new dimension. She's as good as human hands can make her right now. We're going to swing for the fences and see what happens. She's already won the Distaff (in 2002), she's the leading (female) money winner of all time, so we'll step out of the box a little bit and see if she can do something that's never been done before. We think we've got everything fine tuned. I'm looking forward to it. I'm excited to see her go for $4 million. I don't care who the hell shows up."

When asked about the decision-making process, Lukas replied, "We analyzed the competition very carefully. We looked at the configuration of the track, the surface, the pace scenario, where we were with our filly. A lot of careful thought went into that decision. I know there are a number of you out there, a majority of you, that are going to say 'Well, what about that?'. But, be a little careful..." He continued, "I gave (Michael Paulson) all the pros and cons from a trainer's standpoint and I wanted him to feel good about it. When he talked to me last night I said 'What's the moment of truth?' and he said 'I'd like to swing for the fences. How do you feel about that' and I said, 'Let's go.'"

Obviously this puts a whole different spin on the Distaff now with her absent, making the race a much more wide open event.