The most prestigious race in Barbados is the Bar$214,000 Sandy Lane Barbados Gold Cup (G1-Bar), celebrating its 35th running this year, along with the 20th year of Sandy Lane Resort's sponsorship, and the 50th anniversary of Bajan independence from Great Britain. Conditions were ideal at the Garrison Savannah Racecourse just outside Bridgetown, with a firm turf course, clear skies, temperatures in the mid 80's, and a 14 mph breeze from the east. The main event was delayed by almost an hour due to four separate fallen riders on the undercard requiring the ambulance to make multiple trips, as well as a bizarre incident involving an illegally parked car blocking the movement of the starting gate. In addition, every race start was delayed by fans crossing the track to/from the infield when the gate was already loaded.

A field of 10 faced the starter as the sun set, with Watchyourownbobber sent off as the 3-2 favorite in this 1800 meter (about 1 1/8 mile) contest, off his 3rd place finish in the Tropical Park Derby at Gulfstream after winning the Showing Up Stakes at Gulfstream Park West (formerly Calder). In to challenge him included 9-5 second choice War Envoy, second in a Tampa Bay allowance after a disappointing 11th in the Breeders' Cup Dirt Mile (G1), and 4-1 third choice and top local hope Just a Fashion, winner of the Coolmore Stakes last out, the major local prep for the Gold Cup. Defending champion Sayler's Creek was the 11-2 fourth choice, and has not raced since that win.

Sayler's Creek and jockey Ricky Walcott was quickest away and led the field first time past the stands while pressed by War Envoy with jockey Mario Pino to his inside and Just a Fashion to his outside through fractions of 24.6 and 48.6 over the firm course. On the clubhouse turn, Just a Fashion with Antonio Bishop gained a short lead parked wide with War Envoy on the rail and Sayler's Creek third through 3/4 in 1:12.6. On the far turn Watchyourownbobber swung out wide for the drive while jockey Jalon Samuel aboard Dorsett came through between horses to the inside of the pacesetter, getting 1 mile in 1:36.8. Under confident handling by Samuel, Dorsett drew off to win by 3 lengths over Watchyourownbobber in a time of 1:49.4, with War Envoy holding on for third and last year's winner Sayler's Creek finishing fourth. 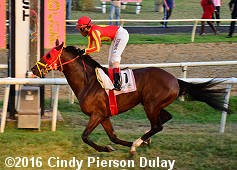 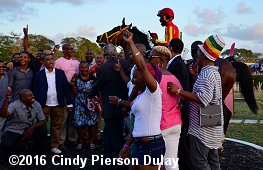 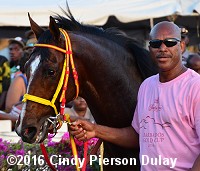 Left: Dorsett was not happy with all the ruckus in the winner's circle.

Right: Dorsett cools off in the walking ring after the race. Winning jockey Jalon Samuel said, “I feel very good. I just can't believe it. It's a pleasure to ride this horse. When we turned the corner and I saw the opening I knew I had it won. I saw the space between horses, I asked him to go on through and he ran it perfect.” 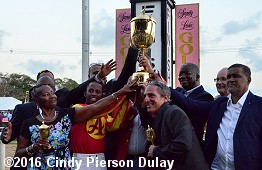 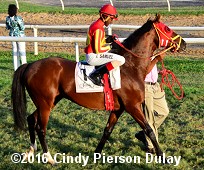 Right: Dorsett in the post parade. Dorsett was a graded stakes quality horse in North America back in 2014, including starts at Saratoga's Fourstardave Handicap (G2) and Woodbine's Nijinsky Stakes (G2) and Woodbine Mile (G1), but never hit the board in those races. 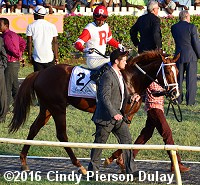 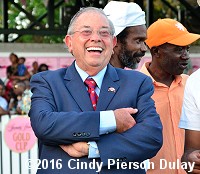 Left: Second place finisher and beaten favorite Watchyourownbobber in the walking ring. The Mike Maker trainee improved his record to 4 wins, 3 seconds, and 2 thirds in 13 starts, earning $198,490 for owners Ken and Sarah Ramsey.

Right: Owner Ken Ramsey doesn't look too upset to have finished second with Watchyourownbobber and fourth with Sayler's Creek. 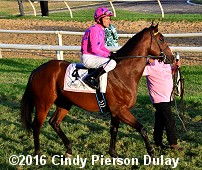 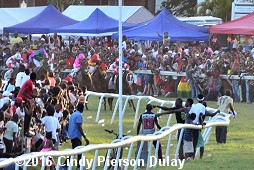 Right: The horses approach the final turn in the Gold Cup and look how close the fans have crowded on the inner and outer rails!


Kicking off the stakes trio at Garrison Savannah was the Bar$50,000 Sandy Lane Spa Sprint Stakes and Trophy (G1-Bar) for older horses sprinting 1100 meters (about 5 1/2 furlongs) around 1 turn. 3-1 second choice Markos was sent to the lead by jockey Antonio Whitehall through fractions of 24.2 and 47.4 while stalked by 25-1 longshot Wild Cat Tea and 15-2 Lavani. Entering the stretch, 7-2 Iamsogroovy came through between horses under jockey Jalon Samuel to win going away by 2 lengths over Lavani in a time of 1:05.8. It was a long 5 1/4 lengths back to 45-1 longest shot A.P. Vincero passing tired horses get third, while 6-5 favorite Shared Adventure lost rider Kyle Carter and did not finish. 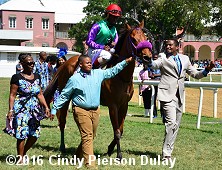 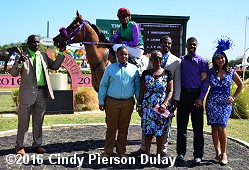 Left: Iamsogroovy and jockey Jalon Samuel parade for the fans after the race. 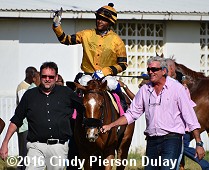 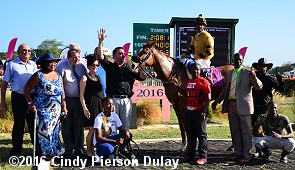 Left: Sirius Black parades for the fans after the race under jockey Patrick Husbands.