Immediately before the Travers on Saturday at Saratoga was the $500,000 Ballerina Stakes (G1) for 3-year-old fillies sprinting 7 furlongs on the main track, looking for automatic entry into the Breeders' Cup Filly and Mare Sprint under the "Win and You're In" promotion. My Miss Aurelia was sent off as the 3-1 favorite in the field of 8 off consecutive third place finishes in the Azeri (G3) and Shine Again Stakes. In to challenge her included 7-2 second choice Willet, an allowance winner last out after finishing second in the Dancing Renee, and 4-1 third choice Artemis Agrotera, last year's Frizette (G1) winner and coming off an allowance win.

Jockey Jose Ortiz sent 9-2 fourth choice La Verdad to the lead exiting the chute and she set fractions of 23.14 and 45.78 while stalked by Artemis Agrotera. Entering the stretch Artemis Agrotera took over from the tiring La Verdad through 3/4 in 1:09.64. Kept to task by jockey Rajiv Maragh she drew off to win by 6 1/2 lengths over late-running My Miss Aurelia in 1:21.89. It was another 1 1/4 lengths back to Willet third. 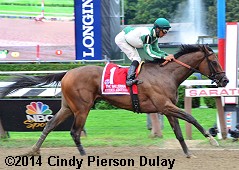 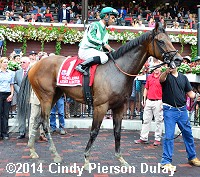 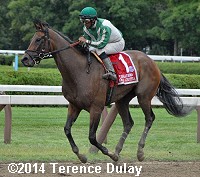 Left: Artemis Agrotera in the winner's circle. Winning trainer Mike Hushion said, "This filly has always acted like a special filly every day I've had her, so I was more confused by the couple of times she didn't run well and never surprised when she shows up big. Rajiv was going to take the path of least resistance. She barked out of there pretty good and he took it from there and it worked out well. To win a Grade 1 at Saratoga, it doesn't get any better than that."

Right: Artemis Agrotera returns after the race. Winning jockey Rajiv Maragh said, "She was pretty dominant today and she was much the best. Groupie Doll is a one of a kind filly, but maybe Artemis Agrotera is another. I was gearing down inside the sixteenth pole because she had the race wrapped up and was powering away. I don't think I squeezed the lemon dry. I think she has more to give." 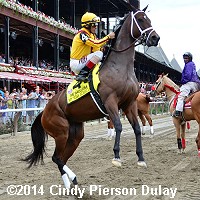 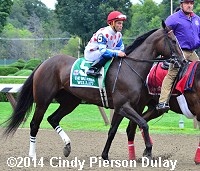 Left: Second place finisher and beaten favorite My Miss Aurelia acts up as she heads out for the post parade. Trainer Todd Pletcher said, "I thought our filly ran well. We were just second best today." Jockey John Velazquez added, "She broke slowly from the gate and I waited a little for her to get settled. She had a little bit of a good run but the other horses weren't slowing down."

Right: Third place finisher Willet in the post parade. The 7-2 second choice was unhurried early under jockey Joel Rosario then passed tired horses to get third beaten 7 3/4 lengths. She improved her record to 8 wins, 6 seconds, and 2 thirds in 18 starts, earning $615,900 for owner-trainer James Iselin and co-owners Charlotte Assoulin and Eli Gindi. 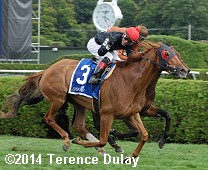 Kicking off the stakes quartet on Saturday was the $250,000 Ballston Spa Stakes (G2) for older fillies and mares going 1 1/16 miles on the Mellon turf course. De La Rose winner Filimbi was sent off as the 3-5 favorite in the field of 7. Abaco was the 4-1 second choice, exiting her 4th place finish in the Diana (G1), over 9-2 third choice Strathnaver, 6th in the Diana after finishing second in the Just A Game.

36-1 longest shot Night Song set early fractions of 23.95, 48.99, and 1:13.33 over the good course while stalked by 6-1 fourth choice Centre Court and favorite Filimbi. On the far turn Night Song tired allowing Centre Court to inherit a brief lead through 1 mile in 1:36.75. However, Strathnaver, 5th early, and Abaco, last early, closed late with Abaco outfinished Strathnaver by a neck in 1:42.64. It was another 2 lengths back to 17-1 Nellie Cashman third, while favorite Filimbi faded to last.
Results chart 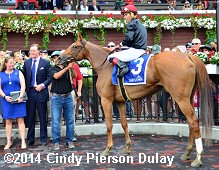 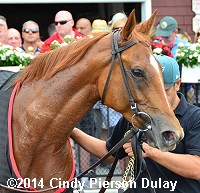 Left: Abaco in the winner's circle. Winning trainer Shug McGaughey said, "I'm excited. In her last three races, she's really had some good moves and been unlucky to lose. Jose rode a great race today and got her in good position. She's a funny kind of filly; if you allow her to lay too close she won't finish as well. I was a little bit afraid that if we did get a pace that he might let her ease up a little sooner than we wanted to. I told him she's going to be back, so you're just going to have to judge your move on what the pace is, and he did a good job of that."

Right: Abaco heads back to the barn after the race. Winning jockey Jose Ortiz said, "She doesn't have any speed, so we have to rate her from behind, and today was the perfect trip. Down the backside I was behind Filimbi, and that was the one I wanted to follow. I was right there, and when I turned for home I knew she was going to give me the big move she gave me last time. By the eighth pole, I knew I had Johnny (Velazquez, aboard Strathnaver). I passed everybody else, so I knew there wasn't anybody else coming." 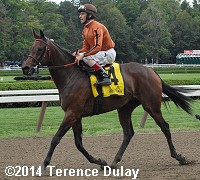 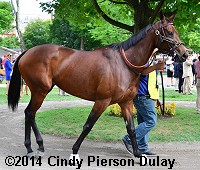 Left: Second place finisher Strathnaver returns after the race. Trainer Graham Motion said, "She ran great. I guess Shug got me back for (beating him in the Grade 1 Sword Dancer Invitational) the other day, right?"

Right: Third place finisher Nellie Cashman in the paddock before the race. The 17-1 shot stalked the pace in 3rd and 4th under jockey Forest Boyce but could not improve late, finishing third beaten 2 1/4 lengths. The Francis Abbott trainee improved her record to 2 wins, 4 seconds, and 4 thirds in 15 starts, earning $239,421 for owner Sycamore Racing LLC. 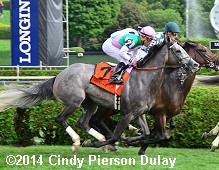 Fourth place finisher and beaten favorite Filimbi first time by. Jockey Joel Rosario said, "We had a good trip, a perfect trip. I thought I was in a good spot, but turning for home they kind of got away from me. She just didn't seem to have it today."