The feature race on Saturday at Santa Anita was the $100,000 Autumn Miss Stakes (G3) for three-year-old fillies going one mile on the turf. Conditions were typical for early October with sunny skies and temperatures in the low 90's and the course rated firm. A field of 7 made final entry with Warren's Showtime sent off as the 7-10 favorite after finishing 3rd in the San Clemente (G2) and Del Mar Oaks (G1). In to challenge her included 5-1 second choice Croughavouke, an allowance winner after finishing 5th in the San Clemente, and 7-1 third choice Mind Out, winless since her debut and 4th in the Unzip Me Stakes last out.

Jockey Victor Espinoza sent 18-1 longest shot Quiet Secretary to the lead first time by through fractios of 22.50, 45.42, and 1:09.69 while pressed by 15-2 fourth choice Nasty and stalked by 15-1 Going to Vegas. Turning for home, Quiet Secretary tired allowing Nasty to inherit the lead through 7f in 1:21.65, but Warren's Showtime, 5th early under Flavien Prat, came out 4 wide for room and rallied to win by a neck in 1:33.77. It was another 1/2 length back to Nasty third. 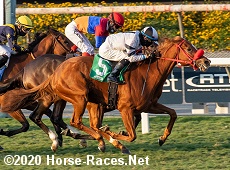 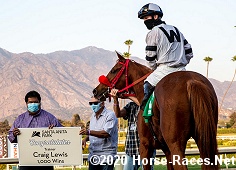 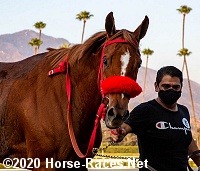 Left: Warren's Showtime in the winner's circle. Winning trainer Craig Lewis, also celebrating his 1000th career win, said, "What was going through my mind was she might not get there! But as usual she did not disappoint. She's really a genuine filly, gives it every time. Fillies like her (bring me back). There are a lot of bumps in the road. A trainer's life is not all pie and ice cream, but when things like this happen it makes it all worthwhile. The early mornings, the things that go wrong, the difficult situations, but situations like this overcome all the negatives involved."

Right: Warren's Showtime heads back to the barn after the race. Winning jockey Flavien Prat said, "She's been moving really well. I've been on her in the morning and I was pretty pleased with the way she was going. She's always running in great races. She definitely deserved a graded stakes. She definitely gives you everything. I thought it was a pretty strong pace upfront so I was taking my time and when I asked her to go she responded well." 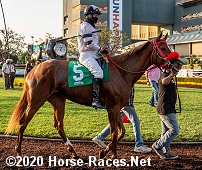 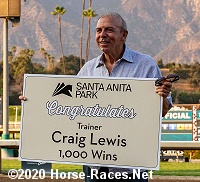 Left: Warren's Showtime in the paddock. Winning owner-breeder Benjamin Warren said, "This puts her at $500,000 in earnings at age three and that's pretty good. We've got her dam back in foal to Clubhouse Ride, so that's really something to look forward to. I went partners with Irv Noren (former MLB All Star) on my first horse in 1980, so to have this filly doing this well is tremendous."

Right: Trainer Craig Lewis with his 1,000 wins sign. Lewis said, "I've been very fortunate. I've had a lot of great horses in my career; Cutlass Reality, beat back to back Derby winners Alysheba and Ferdinand in the Hollywood Gold Cup (1988), Music Merci who won the Del Mar Futurity (1988), Illinois Derby (1989) and many other big races, and then of course Larry the Legend. I've had multiple other good horses and a lot of great owners. I'm very thankful and feel very fortunate, very grateful to be in this situation." 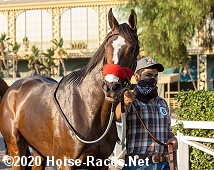 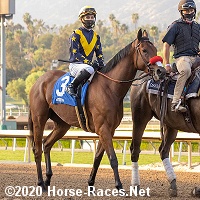