Woodbine on Saturday hosted two graded stakes on the Tapeta main track with potential Sovereign Award implications in the older horse divisions. Conditions were unusually "warm" for early November in southern Ontario with partly cloudy skies and a high temperature of 21 C (70 F). Although there were no stakes on the turf today, both courses were rated "firm" with the Taylor at GoingStick 11.1 and the inner almost "hard" at 12.8. The connections of owner Gary Barber, trainer Mark Casse, and jockey Rafael Hernandez swept the two stakes on the afternoon, while Casse and Hernandez also won the 5th race, a $101,200 allowance race on the turf. With his 3 wins on the card, Casse, who is in the Racing Halls of Fame in both Canada and the USA, is just 3 wins away from joining the 3000-win club as a trainer.

The $175,000 Autumn Stakes (G2) featured a field of just 5 older horses (after 1 scratch) going 1 1/16 miles on Tapeta. Salute With Honor was sent off as the 4-5 favorite off his win in the Durham Cup (G3). In to challenge him included 9-4 second choice Skywire, winner of the Eclipse (G2) but 2nd in the Seagram Cup (G3) and Durham Cup, and 11-2 third choice Vanzzy, winner of the Jersey Derby at Monmouth but 4th in the James W. Murphy last out.

Jockey Patrick Husbands sent Salute with Honor to the lead first time by through fractions of 24.21, 48.10, and 1:11.85 while pressed by 10-1 Armistice Day and stalked by Vanzzy. Turning for home the favorite tired allowing Armistice Day to gain the lead through 1 mile in 1:36.42. Skywire, 4th early under Rafael Hernandez, came out for room and rallied wide to win going away by 1 3/4 lengths in 1:42.70. It was another 1 1/2 lengths back to 9-1 Timeskip third, while favorite Salute With Honor tired badly to finish last beaten 8 1/4 lengths. 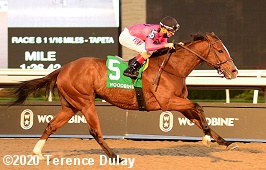 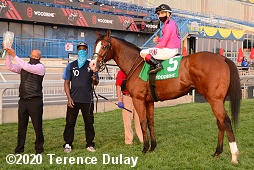 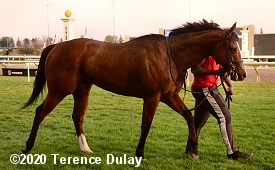 Left: Skywire heads to the winner's circle. Winning jockey Rafael Hernandez said, "Last time, we were stuck inside and by the time he was clear and started running, it was too late, but today I made sure he had a clear path the whole way and you see the results. Every time he switches leads, he gives you another gear. When he switched leads, I thought, that's it. If they're going to beat me, they have to come running because my horse was running."

Right: Skywire heads back to the barn after the race. The Mark Casse trainee improved his record to 5 wins, 3 seconds, and 0 thirds in 14 starts, earning $392,657 for owners Gary Barber and Lucio Tucci. 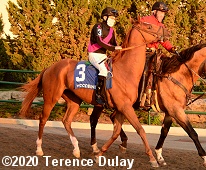 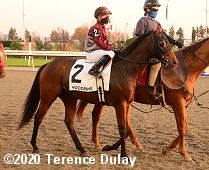 Left: Second place finisher Armistice Day heads out to the track before the race. The Barbara Minshall trainee improved his record to 3 wins, 3 seconds, and 2 thirds in 17 starts, earning $225,695 for owners Bruce Lunsford and Lansdon Robbins. 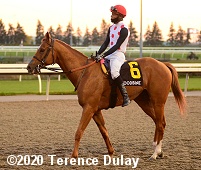 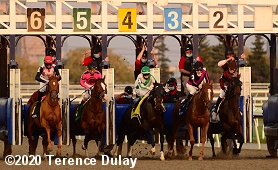 Left: Last place finisher and beaten favorite Salute With Honor returns after the race. The Mark Casse trainee has a record of 7 wins, 2 seconds, and 2 thirds in 20 starts, earning $303,177 for owner-breeder Live Oak Plantation.

Right: The horses break from the gate for the Autumn Stakes


An hour before the Autumn Stakes, a field of 10 older fillies and mares contested the $125,000 Maple Leaf Stakes (G3) going the classic trip of 1 1/4 miles on the Tapeta. Art of Almost was sent off as the 2-1 favorite, winless since June and second in the Belle Mahone Stakes after finishing 6th in the Canadian Stakes (G2). In to challenge her included 11-4 second choice Heavenly Curlin, winner of 2 straight allowances and making her stakes debut here, and 13-2 third choice Tappitty Tapitty, off a close second place finish in an allowance event on the turf. 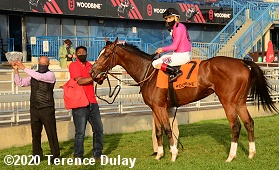 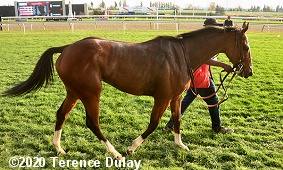 Left: Heavenly Curlin in the winner's circle. Winning jockey Rafael Hernandez said, "There was too much speed in the race, so the main thing was getting her relaxed. We just sat behind [Art of Almost] and when we turned for home, I just put her in the clear. She was doing her thing and just rolling down the lane."

Right: Heavenly Curlin heads back to the barn after the race. The Mark Casse trainee improved her record to 3 wins, 0 seconds, and 1 third in 5 starts, earning $127,762 for owners Gary Barber and John Oxley. 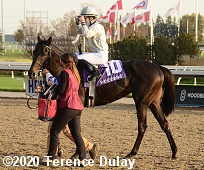 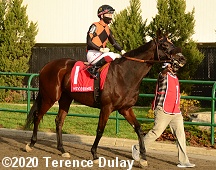 Right: Third place finisher Peace Seeker heads out to the track before the race. She improved her record to 4 wins, 5 seconds, and 5 thirds in 25 starts, earning $158,119 for owner-trainer Nicholas Nozowenko.