The $150,000 Autumn Stakes (G2) is the last Grade 2 race in Canada, and features top older horses going 1 1/16 miles, with Sovereign Award implications in the 3-year-old male and older male divisions. Conditions were excellent at Woodbine, with sunny skies, temperatures in the mid 50's and light wind. City Wolf was sent off as the 6-5 favorite in the field of 10, exiting a 4 race winning streak including the Durham Cup (G3) last out. In to challenge him included 5-1 second choice Stunning Stag, third in the Presque Isle Mile after finishing a close second in the Seagram Cup (G3), and 11-2 third choice James Street, second in the Durham Cup (G3) after winning the Seagram Cup (G3).

Jockey Jesse Campbell sent 38-1 longest shot Straight Story to the lead first time past the stands, and he set easy fractions of 24.39, 48.27, and 1:12.13 over the Polytrack, while stalked by 26-1 Court of the Realm and 8-1 Pender Harbour. On the far turn, Pender Harbour moved up to challenge but Straight Story had something left, kicking clear late to win by 1 3/4 lengths in a time of 1:42.87. It was another 1 3/4 lengths from Pender Harbour back to late-running Stunning Stag third, while favorite City Wolf checked in 8th. 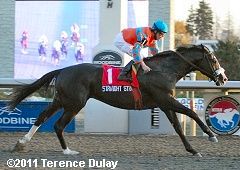 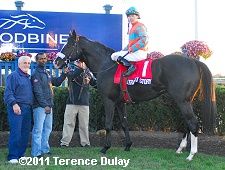 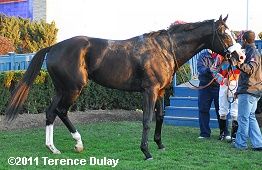 Left: Straight Story in the winner's circle. Jockey Jesse Campbell said, "He broke sharp and we just let him run his own race. We thought we'd be laying second. He's pretty adamant, the horse, when he left the gate to be on the lead. I let him get comfortable and tried to get away at the top of the lane. I didn't want to let somebody come to me, I wanted to open it up and try to hold on. He ran really game."

Right: Straight Story ready to head back to the barn. The Alan Goldberg trainee improved his record to 7 wins, 6 seconds, and 0 thirds in 22 starts, earning $736,945 for owner Richard Santulli. 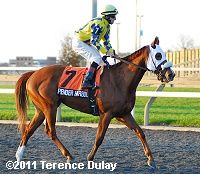 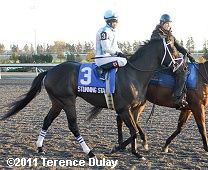 Left: Second place finisher Pender Harbour returns after the race. The 8-1 shot stalked the pace third 2 lengths back early under new jockey Slade Callaghan, moved up to second on the turn, but could not close on the winner. The Mike DePaulo trainee improved his record to 5 wins, 1 second, and 1 third in 11 starts, earning $972,265 for owners Dennis Andrews, Sandra Lazaruk, and Rob Giffin. 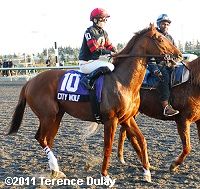 Eighth place finisher and beaten favorite City Wolf in the post parade. The 6-5 favorite raced in 7th early 6 lengths off the pace under regular rider Emma-Jayne Wilson, came out 6 wide into the lane but failed to rally, finishing 8th beaten 8 3/4 lengths. The Reade Baker trainee has a record of 4 wins, 1 second, and 1 third in 10 starts, earning $211,467 for owner-breeder Stronach Stables.