Belmont Park hosted two Grade 3 events on Saturday afternoon before just 4,449 fans under clear skies and temperatures in the low 70's. Run 3 weeks before the Breeders' Cup, these are possible preps for the Championships but are not "Win and You're In" events.

The $200,000 Athenia Stakes (G3) featured a field of 7 older fillies and mares going 1 1/16 miles on the Widener turf course. Samitar was sent off as the even-money favorite off her win in the Speed Boat Stakes after finishing fourth in the Diana (G1). In to challenge her included 3-1 second choice Pianist, runner-up in the Ballston Spa (G2), and 5-1 third choice Abaco, second in the Lady Baltimore at Laurel last out.

Jockey Luis Saez sent 8-1 Assateague to the lead exiting the chute and she set fractions of 24.65, 47.23, and 1:10.10 over the firm course while pressedd by Pianist and stalked by Samitar. Entering the stretch, Pianist easily took over the lead from the tiring pacesetter, and opened up a 3 length lead at the 1/8 pole through 1 mile in 1:33.75. Abaco, sixth early, put in a 4 wide rally but Pianist finished up 2 lengths in front in 1:39.94. It was another 1 1/4 lengths back to favorite Samitar third. 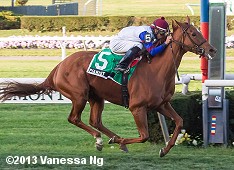 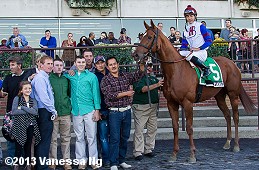 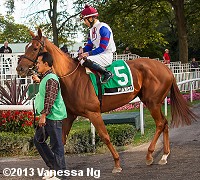 Left: Pianist in the winner's circle. Cherie DeVaux, assistant to trainer Chad Brown said, "This year, Pianist has been outstanding for us. I think she ran similarly to last time (Ballston Spa). Jose watched the replay of that race, and watched her sit off Laughing and she hung in there. He did the same thing today, and it worked out."

Right: Pianist in the paddock. Jockey Jose Ortiz said, "She didn't break the way I wanted her to because my plan was to go to the front, so I made my move outside (jockey Luis Saez aboard Assateague) and followed him. The last time (Pianist) ran she followed Laughing. She did pretty good as she finished second to Laughing, who is going to the Breeders' Cup. I tried to ride the same race, and everything went the right way." 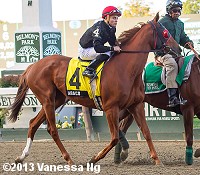 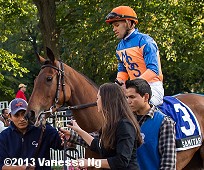 Left: Second place finisher Abaco in the post parade. The 5-1 third choice was 6th early under jockey Joel Rosario then closed late to get second beaten 2 lengths. The Shug McGaughey trainee improved her record to 4 wins, 7 seconds, and 2 thirds in 17 starts, earning $328,669 for owner-breeder Phipps Stable.

Right: Third place finisher and beaten favorite Samitar in the paddock before the race. The even-money choice stalked the pace in third under jockey Javier Castellano but could not improve, finishing third beaten 3 1/4 lengths. The Chad Brown trainee improved her record to 6 wins, 4 seconds, and 4 thirds in 20 starts, earning $1,144,941 for owner Martin Schwartz.

An hour before the Athenia, a field of 8 older horses went 1 1/8 miles on the inner turf in the $200,000 Knickerbocker Stakes (G3). Za Approval, second in both the Woodbine Mile (G1) and Shoemaker Mile (G1) was sent off as the 7-4 favorite over 5-2 second choice Boisterous, third in the Bowling Green Handicap (G2), and 8-1 third choice Mr. Commons, off a fourth place finish in the Fourstardave (G2). 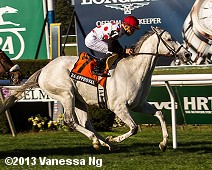 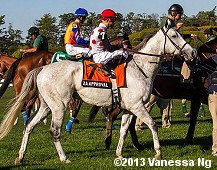 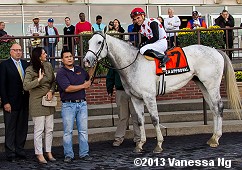 Left: Za Approval in the winner's circle. Trainer Christophe Clement said, "He's won three graded stakes this year. He's a fun horse. When I ran him in Grade 1s, he got beat by two of the best milers in the country. He's been getting better all of his life. He's been a great credit to the Live Oak team and Mrs. (owner Charlotte) Weber because they have been very patient with him, and it's wonderful when it works out. We knew there was pace in the race. It's an easy race to ride. Joel, as usual, gave us a great ride. Turf season is close to an end. We could either give him a break and send him to Live Oak, or we could give him one more race, such as the Citation (Hollywood Park)."

Right: Za Approval heads to the starting gate. Jockey Joel Rosario, celebrating his first stakes victory since returning from a fractured bone he suffered in his left foot in August, said, "It was a good trip. This horse tries hard all the time. I rode him twice in Florida this winter; he finished second and he won, so I had confidence in him. I didn't want to rush him too much; they were going a little quick. With this horse, every time you ask him, he keeps giving." 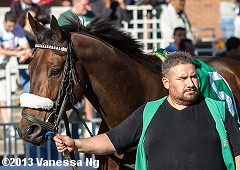 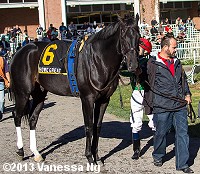 Left: Second place finisher Plainview in the paddock before the race. The 9-1 shot set the pace under jockey Travis Dunkelberger but was no match for the winner. The Greg DiPrima trainee improved his record to 7 wins, 3 seconds, and 3 thirds in 26 starts, earning $347,841 for owners Jesse Iglesias and Mike Imperio.

Right: Third place finisher Howe Great in the paddock before the race. The 10-1 shot saved ground in fifth early under jockey Cornelio Velasquez, then rallied late to get third beaten 1 1/2 lengths. The Rick Mettee trainee improved his record to 6 wins, 5 seconds, and 3 thirds in 18 starts, earning $534,953 for owner-breeder Barry Irwin (Team Valor).