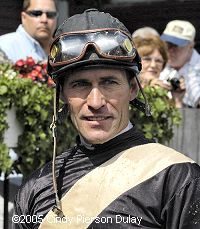 In a press conference held at historic Churchill Downs, Hall of Fame jockey and three-time Kentucky Derby winner Gary Stevens announced his retirement from riding after a 26-year career and revealed plans to move into the broadcast booth as a racing analyst with TVG, the interactive horse racing network.

"There is a piece of my heart that would love to continue riding, but my body can't take it anymore," said Stevens. "Between weight concerns and the limited number of mounts I am riding, the reward is just not there anymore. The injuries I have sustained over the years have caught up with me".

Along with his three victories in the Kentucky Derby aboard Winning Colors (1988), Thunder Gulch ('95) and Silver Charm ('97), Stevens' stellar career included wins in more than 5,000 races. His victory total includes wins in five other Triple Crown races: two in the Preakness and three in the Belmont Stakes. He also won eight races in the Breeders' Cup World Thoroughbred Championships and collected a record nine victories in the Santa Anita Derby. Stevens rode Silver Charm to victory in the $5 million Dubai World Cup in 1998 and took the Japan Cup in 1991 aboard Golden Pheasant. His many riding titles include crowns at Santa Anita, Oak Tree at Santa Anita, Del Mar, Hollywood Park and a title he earned in England while riding abroad.

Stevens, 42, will officially end his riding career with a pair of mounts at Churchill Downs on Saturday, Nov. 26. He will launch his new career as a race analyst with TVG in January.

"I couldn't be more excited about the relationship," said Stevens. " I'm retiring from riding, but not from racing - and I look forward to working with the team at TVG. I have enjoyed a great relationship with (TVG executive producer) Tony Allevato and his team and look forward to giving viewers an insider's look at what takes place on the race track."

Stevens moved beyond his racetrack accomplishments to earn accolades for his portrayal of legendary jockey George "The Iceman" Woolf in Universal Studios' 2003 blockbuster film "Seabiscuit." The box office hit, based on a best selling book by Laura Hillenbrand, earned seven Academy Award nominations, including a nomination for "Best Picture." In the same year, People magazine featured Stevens in its annual "50 Most Beautiful People" issue.

A native of Caldwell, Idaho, Stevens scored his first victory in his very first race aboard Lil Star at Les Bois Park in Boise on May 16, 1979. His father, Ron Stevens, trained Lil Star.

The remarkable accomplishments in the career that grew from that initial victory resulted in Stevens' enshrinement in the Thoroughbred Racing Hall of Fame in 1997. At 34, he was the fourth youngest person to be inducted into that prestigious institution.

Stevens earned an Eclipse Award the following year that recognized him as America's leading jockey. In 1993, he became the youngest jockey to surpass the $100 million mark in career earnings. Stevens was honored in 1996 as the recipient of the George Woolf Memorial Jockey Award, which is named after the riding legend he portrayed in "Seabiscuit" and is presented each year to a jockey whose career and personal character reflect positively on themselves and Thoroughbred racing.

His mounts have earned more than $221 million, which ranks Stevens fifth on the all-time list of earnings by North American jockeys. He scored the 5,000th victory of his career on Oct. 30 at Belmont Park aboard Joint Aspiration, becoming just the 20th jockey to surpass that milestone. Other Hall of Famers on that elite list include all-time leading rider Laffit Pincay, Jr., the late Bill Shoemaker, Pat Day, Angel Cordero, Jr., and Jerry Bailey.

Stevens will ride E.J. Sukley's Purim for trainer Tom Proctor in Friday's 131st running of the $500,000-added Clark Handicap at Churchill Downs, his only scheduled mount of the day. Stevens teamed with Proctor for one of the biggest wins of his career when he rode Glen Hill Farm's 47-1 shot One Dreamer to an upset victory for Proctor in the $1 million Breeders' Cup Distaff in 1994 at Churchill Downs.

He is scheduled to ride two horses at Churchill Downs on Saturday, Nov. 26, both for trainer Patrick Biancone. Those mounts include a ride aboard Michael Tabor, Derrick Smith and Mrs. John Magnier's unbeaten filly Sabatini in the $200,000 Golden Rod Stakes for 2-year-old fillies. Stevens won the Kentucky Derby for Tabor aboard Thunder Gulch in 1995. His final career mount is scheduled in Saturday's 12th and final race aboard Joseph Allen's Louve Royale.

"I've enjoyed an incredible riding career and I'm very blessed to walk away from a demanding sport in one piece," said Stevens. "It is time to move on to the next chapter in my life."