On Saturday, the most important prep race for the Queen's Plate was contested at Woodbine. The 61st running of the Plate Trial, traditionally run three weeks before the Plate at 1 1/8 miles, a furlong shorter than the Plate, drew a compact field of six. Sent off as the 4-5 odds on favorite was Mobil, coming off five first place finishes, with stakes wins in the Cup and Saucer and the Queenston Stakes to his credit (in the Coronation Futurity he dead-heated for the win but was disqualified to second). Regular rider Todd Kabel was in the irons once again. The 3-2 second choice was the Frank Stronach-owned Rock Again, whose sire Awesome Again won the Queen's Plate at 3 and the Breeders' Cup Classic at 4. Top Florida jockey Eibar Coa shipped in for the ride on Rock Again.

When the gate opened, Sonofawac, the longest shot on the board at 36-1, was sent to the front by jockey James McKnight and he led the field through an initial quarter in 26.33 and a half in 47.36. The track was labelled "fast" but was actually wet from rains all afternoon and had been rolled hard and sealed before the previous race. Mobil pressed the pacesetter three-wide and Sonofawac relinquished the lead to the favorite down the backstretch, with Mobil getting six furlongs in 1:12.14. Rock Again, sixth first time past the stands, settled in behind the front pair early and made a four wide move on the far turn to pass the tiring Sonofawac and wrest the lead from Mobil in mid stretch, getting the mile in 1:38.76. But his lead was short-lived, as Mobil came again on the outside, got the lead at the 70 yard pole, and drew off to win by 1 1/2 lengths in a final time of 1:51.84 for the nine furlong feature. It was 9 lengths back to third place finisher Peef at 26-1. Sonofawac finished fourth.

Winning trainer Mike Keogh said, "I was very impressed, he ran huge. He gave him a great ride. Looking at the race, I thought, 'Uh-oh,' but Todd said he still had horse under him. Obviously, he did. It's entirely up to Todd to decide who he'll ride [Mobil or Wando, in the Queen's Plate]. He proved he's a good horse, but we knew that last year. He galloped out strongly again today." 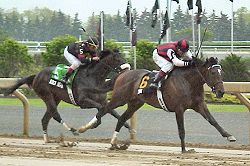 Mobil takes off and retakes the lead from Rock Again in the stretch to win. His jockey Todd Kabel said, "I had a great trip. We dominated the whole race. I had a lot of horse. I didn't want to let Rock Again get too far in front of us because I have a lot of respect for that horse. Once my horse kicked in at the 3/16ths pole, I said, 'This race is all over.'" 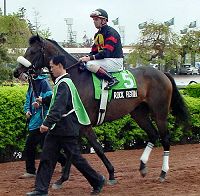 Jockey Eibar Coa aboard second place finisher Rock Again, shown here in the walking ring, said, "I really had a good trip and my horse broke the way I wanted him to. I put him in the position I wanted to be. By the 1/16 pole, I went by [Mobil] thinking it was the only chance that I had to beat him. He had so much horse left that if I stayed behind him I would never go by him. I know if I stayed next to [Mobil] he would have beaten me anyway, so I just took a shot to get him behind me to what would happen. The other horse was better than mine today." 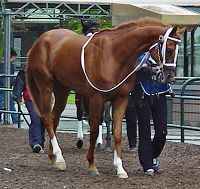 Third place finisher Peef heads to the paddock for saddling before the race. His jockey Constant Montpellier said, "My horse ran a good race. He just seems to me like he's a one-paced type of horse and when they accelerated in the stretch, he couldn't keep up. He ran a good third."