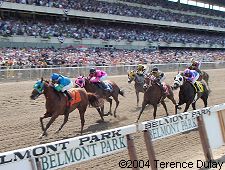 For many years, the New York Racing Association was the pride and joy of the racing industry. The brainchild of breeder Ogden Phipps, its original objective was to unite New York City's racetracks under one non-profit corporation and consolidate operations to Aqueduct, Belmont, and Saratoga while closing other tracks such as Jamaica. It is without doubt that New York racing has flourished under NYRA, with some of the largest purses in the country year-round and prestigious Grade 1 races such as the Metropolitan Handicap, Belmont Stakes, Travers Stakes, and the Jockey Club Gold Cup.

However, in recent months the reputation and the very survival of NYRA have come into question. Most recently, a gambling ring involving race fixing and illegal wagering involving the NYRA tracks has resulted in a federal indictment of 17 individuals. This ring involved horses being given "milkshakes" (bicarbonate solution) with bets placed through various off-track rebate shops located in the UK, Curacao, and an Indian reservation in Oklahoma. In reaction, NYRA has ceased to sell their signal to those off-track locations and will institute post race milkshake tests.

As well, weeks after warrants were issued and Aqueduct was raided by the police searching for proof of irregularities in jockey weight reporting, NYRA's clerks of scales were suspended, leading to more mistrust by the betting public that the horses carried more weight than had been assigned. Back in 2003 NYRA and a number of mutuel clerks were charged with tax evasion, as the clerks' employer apparently laundered part of their salaries through the tote system in order to misreport their incomes and reduce the tax they owe.

With all this happening in the background, NYRA has been losing money for years while its millionaire directors continued to spend lavishly on country club memberships, golf outings, and other travel. NYRA dodged a huge bullet when Mayor Rudy Giuliani, who had agreed to sell the New York City Off-Track Betting company to Magna Entertainment, retired and newly elected mayor Michael Bloomberg canceled the deal. NYRA felt that NYCOTB rightfully belongs to them, as they are the only track operator in the country that has to compete directly with the off-track betting provider in its own neighborhood. Despite the deal being canceled, Bloomberg has let the OTB issue slide, so although OTB wasn't sold to Magna, the status quo remains.

Popular NYRA president and chief executive officer Barry Schwartz resigned from his job in the summer of 2004, and it was rumored that National Thoroughbred Racing Association commissioner Tim Smith, who vacated his position in September, was to take his place. However, the days and weeks passed after Schwartz' departure, with no word from Smith. NYRA could not go on without a leader, so in November, it hired former Daily Racing Form president Charlie Hayward for $350,000 per year to try to bring in some new blood.

On December 16th, Smith surprised the racing world with an announcement that, not only would he not be taking the helm at NYRA, he would be working to help New York racing through a new initiative, entitled "Friends of New York Racing". This partnership includes the likes of track owners Churchill Downs Inc., Magna Entertainment Corp., Woodbine Entertainment Group, the Keeneland Association, Oak Tree Racing Association, Breeders' Cup Limited, The Jockey Club, and totalisator operator Scientific Games Corp. (formerly Autotote).

To this observer, it appears that this is the beginning of the end for the New York Racing Association. Many may lament the demise of the Phipps' family's gift to the racing world, but the once proud NYRA has been irreparably tarnished. No matter how many security measures are implemented, bettors will never forget the events of the last few months and will feel that they are not getting a fair shake when betting on New York racing events. A scathing editorial by the New York Daily News demands no less than the state revoking NYRA's license and putting it up for sale.

This is where Tim Smith's group comes in. Despite his comment in the initial press release that "Friends of New York Racing was created to examine the overall structure and economics of horseracing and pari-mutuel wagering in New York and not to supersede [...] the New York Racing Association and its Federal Monitor" the timing of the group's formation is quite convenient to say the least. All signs point to a takeover bid, either when the state revokes the license or when that license runs out in 2007 and is not automatically renewed. Rather than get caught in a bidding war, we see a rather unlikely alliance with arch-rivals Magna and Churchill Downs as partners along with Scientific Games, which recently lost the lucrative NYRA contract to its competitor United Tote, looking to take over ownership. It is unlikely that another entity could afford to outbid Smith's partnership for the NYRA franchise if they want to pursue it, and with Keeneland, Oak Tree, and Breeders' Cup involved, the tradition of New York racing run by a non-profit entity may well continue.