The Queen's Plate Festival weekend officially kicked off on Friday afternoon during the first twilight card of the year. It was cloudy with passing rainshowers with the temperature of 28 C (83 F). The feature race was the $100,000 Lady Angela Stakes for Ontario-sired 3-year-old fillies sprinting 7 furlongs on the main Tapeta track.

Shady Well Stakes runner-up Sav was sent off as the 7-5 favorite in the field of 5 off an allowance win last out. In to challenge her included 9-5 second choice Ciuri, 3rd in allowance company last out and making her stakes debut here, and 4-1 third choice Brookies Bear, also coming off a 3rd place finish in an allowance.

Jockey Eurico Rosa da Silva sent Ciuri to the lead exiting the chute and she set fractions of 23.19 and 46.20 while pressed by Sav and stalked by Brookies Bear Entering the stretch Ciuri opened up a 2 length advantage through 3/4 in 1:10.61. Jockey Jesse Campbell and Sav attempted to close late but Ciuri was up to the challenge, holding her off to win by a neck in 1:23.42. it was another 2 3/4 lengths back to Brookies Bear third. 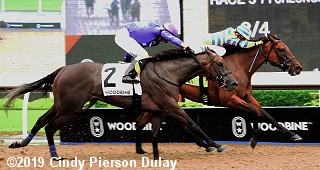 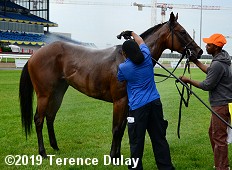 Right: Ciuri in the post parade. Winning jockey Eurico Rosa da Silva said, "She ran a great race; she was very, very relaxed. She handled seven-eighths. Seven-eighths and one yard, I don't know." 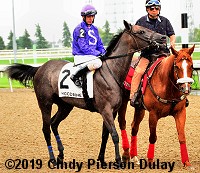 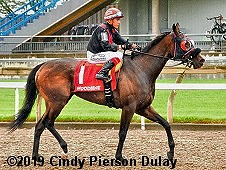 Left: Second place finisher and beaten favorite Sav returns after the race. The 7-5 choice pressed the pace the whole way under Jesse Campbell but could not pass the pacesetter. The Ricky Griffith trainee improved her record to 2 wins, 3 seconds, and 0 thirds in 6 starts, earning $108,898 for owner Steven Duffield.

Right: Third place finisher Brookies Bear in the post parade. The 4-1 third choice stalked the pace in 3rd unde Luis Contreras but could not improve late. The Ashlee Brnjas trainee improved her record to 1 win, 0 seconds, and 3 thirds in 5 starts, earning $38,621 for owner-breeder Colebrook Farms and co-owners Bear Stables and Mickey Demers. 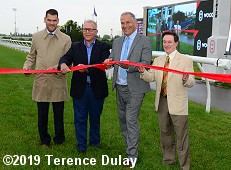 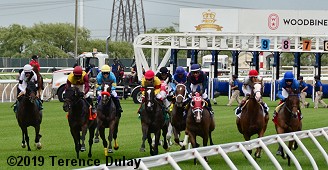 The day also marked the debut of the "new" 7 furlong inner turf course at Woodbine, replacing the harness track that was in that location since 1992 (the original Woodbine turf was there from 1956-1991). Before the Lady Angela Stakes, there was a brief ribbon-cutting ceremony (left), with Woodbine CEO Jim Lawson doing the honours, accompanied by Jonathan Zammit, vice president of Thoroughbred racing operations, Tom Via, chief operating officer, and retired Hall of Fame jockey Sandy Hawley.

When the field broke from the gate parked at the 1/8 pole (right), track announcer Robert Geller said, "A new chapter in the history of Woodbine, the inner turf underway." During a press conference earlier in the day, Lawson said that the new course features a fiber growing medium and drainage system similar to that used in Hong Kong, so it can hold up in wet weather better than the main E.P. Taylor turf course on the outside. 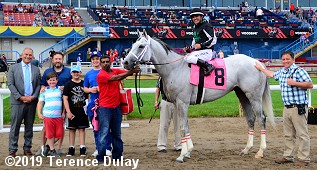 Winning jockey Eurico Rosa da Silva said, "It feels super. The turf is like carpet. The turn is so good. I feel like it's going to be a small, little park for me to play there, it's really, really nice. I have a great feeling."