There were three Breeders' Cup Challenge "Win and You're In" stakes races at Santa Anita on Saturday afternoon. Conditions were typical for early October in Arcadia for the 11,598 fans in attendance, with sunny skies and temperatures near 90. The feature race on the card was the $300,000 American Pharoah Stakes (G1) for 2-year-olds going 1 1/16 miles on the main track seeing automatic entry into the Breeders' Cup Juvenile (G1) to be run at Keeneland on Friday November 4, as well as an early 10 points in the "Road to the Kentucky Derby". Cave Rock was sent off as the 2-5 favorite in the field of 8, undefeated in 2 starts including the Del Mar Futurity (G1). In to challenge him included 3-1 second choice Hejazi, second in both his starts in maiden company, and 10-1 third choice National Treasure a debut winner at Del Mar on September 3. 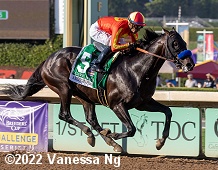 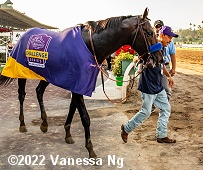 Left: Cave Rock in the winner's circle. Winning trainer Bob Baffert, who swept the superfecta with his 4 entrants, said, "I can't remember running 1-2-3-4 ever. The really good ones come around quickly and he's always been different, he's built a bit different than Arrogate (who sired two other winners in the afternoon.) he's powerful, stronger and he's quick. He runs with his head sort of low like Arrogate. He just keeps improving, he trains easily. I really don't work him too fast, you have to count on their talent to get them there."

Right: Cave Rock in his winner's blanket. Winning owner Mike Pegram said, "He's the real real deal. The first time I saw him was in Del Mar. Bob bought him. You look at him now, he's everything a guy would want. He's won two Grade 1's. We'll take it. It's been a great 10 weeks and hopefully more fun to come in the springtime. We'll find out what he's made of four weeks from now if everything is okay." 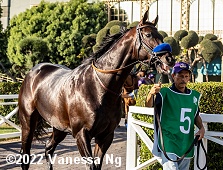 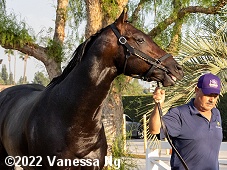 Left: Cave Rock in the paddock before the race. Winning jockey Juan Hernandez said, "He was kind of looking around a little bit around the turn, when he got the lead, he was all game and after that he started improving his pace and he just kept going. I just let him run because that's the way he runs. I didn't want to move too soon. I felt the pressure, but I just let my horse get comfortable, and I could feel when the company started to get a closer, he started to pick it up himself, so I was happy with that. At the quarter pole he just changed leads and he just kept going again."

Right: Cave Rock heads back to the barn. Baffert added, "Today those were some good horses behind him. Those colts, you are going to hear about them down the road. Right now, he's what you need, he's something that is right now and something that will be in for the next thirty days. The (partnership) is a fun group.. they have Speed Boat Beach and now this horse who are going to the Breeders' Cup. This horse had to run to get to the Breeders' Cup." 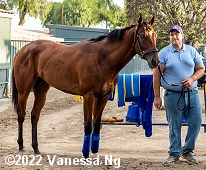 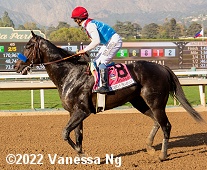 The horses break from the gate for the American Pharoah Stakes.

Kicking off the Saturday graded stakes trio, the $300,000 Rodeo Drive Stakes (G1) featured a field of 9 older fillies and mares going 1 1/4 miles on the turf out of the downhill chute, looking for automatic entry into the Breeders' Cup Filly and Mare Turf (G1) to be run on November 5. Fluffy Socks was sent off as the 3-2 favorite off second place finishes in the Matchmaker (G3) at Monmouth and the Ballston Spa (G2) at Saratoga. In to challenge her included 5-2 second choice Family Way, second in the Ladies Marathon (G3) at Kentucky Downs after finishing third in the Beverly D (G1) at Churchill Downs, and 11-4 third choice, last year's winner Going to Vegas off a third place finish in the John C. Mabee (G2) at Del Mar after a close second in the Gamely (G1) at Santa Anita.

Jockey Umberto Rispoli sent Going to Vegas to the lead down the chute and across the main track through fractions of 23.82, 48.60, 1:13.42, and 1:36.61 while pressed by 13-2 fourth choice Neige Blanche and stalked by 34-1 longest shot Bellamore. Turning for home, Going to Vegas opened up a 2 length lead. Family Way put in a strong rally from 6th early to no avail as Going to Vegas cruised the rest of the way to win by 1 1/4 lengths in 1:59.41. It was a neck back to Bellamore third, and a length more to favorite Fluffy Socks fourth. 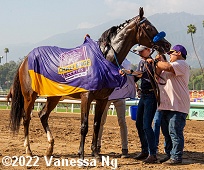 Left: Going to Vegas in the winner's circle. Winning owner Bing Bush (Abbondanza Racing) said, "This is an absolute dream come true. I cannot even believe it and to be here right now with our Abbondaza partners, it is just so magical, and to be here with MyRacehorse and Medallion, it has just been an incredible journey that she has taken us on. We thought about selling her last year and we decided to keep her, and now we are going to go to Keeneland, my home track, where I grew up in Lexington, and (we) get to go there with this great filly. Phil's done an amazing job with her. I cannot possibly say enough."

Right: Going to Vegas in her winner's blanket. Winning jockey Umberto Rispoli said, "We were expecting to go to the lead. We had the same plan and everything worked well. I haven't been on her since last March, but she gave me that same feeling as the last time. At the top of the stretch, she took off. She felt good, was really relaxed and she did everything. She always responds. I think she really loves this track. It's on to Keeneland." Trainer Phil D'Amato added, "This was our plan all along to focus on this race to bring us to the Breeders' Cup and we got the job done. Umberto knows her very well, so I just kind of legged him up. I thought we'd be on the lead but, he had a plan. Plan A worked and he got the job done." 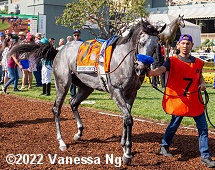 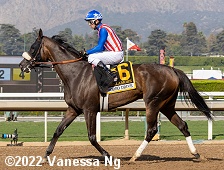 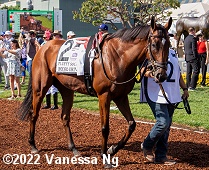 Fourth place finisher and beaten favorite Fluffy Socks in the walking ring. The Chad Brown trainee has a record of 4 wins, 7 seconds, and 2 thirds in 17 starts, earning $687,680 for owner-breeder Head of Plains Partners (Sol Kumin).

The $200,000 Chandelier Stakes (G2) featured a field of seven 2-year-olds going 1 1/16 miles on the main track seeing automatic entry into the Breeders' Cup Juvenile Fillies (G1) to be run at Keeneland on Friday November 4, as well as an early 10 points in the "Road to the Kentucky Oaks". Justique was sent off as the 6-5 favorite off her debut win July 31 at Del Mar. In to challenge her included 3-2 second choice Home Cooking, a close second in the Del Mar Debutante (G1), and 6-1 third choice Huntingcoco, a debut winner by 6 3/4 lengths on September 4.

Jockey Ryan Curatolo sent 56-1 longest shot Naughty Lottie to the lead first time by through fractions of 22.85 and 46.71 while pressed by 27-1 Ice Dancing and stalked by Home Cooking. On the far turn Naughty Lottie tired allowing Ice Dancing to inherit the lead through 3/4 in 1:11.45. Turning for home, 8-1 fourth choice And Tell Me Nolies, fifth early under Ramon Vazquez, swept to the lead 4 wide through 1 mile in 1:39.00. Kept to task by Vazquez, And Tell Me Nolies held off late-running 24-1 Uncontrollable by 3/4 lengths to win in 1:46.15. It was a long 4 3/4 lengths back to favorite Justique third. 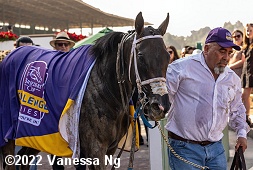 Left: And Tell Me Nolies in the winner's circle. Winning jockey Ramon Vazquez said, "She stumbled very badly at the break. She did the same thing in the Debutante. We settled in, she knows not to move too early. She got a little tired late, but she knows what to do. She is getting better and better after every race. She can handle the distance. I think she is going to be a superstar later."

Right: And Tell Me Nolies heads back to the barn. Winning trainer Peter Miller said, "She stumbled pretty good leaving (the gate) and I wasn't too thrilled with that, but Ramon didn't panic. He let her get up and get into her stride and that was the key. She can get in a foul mood and you have to be careful, but I'd say about 90 percent of the time she's great and she's just got a heart of gold. I just want to thank Mr. (Peter) Redekop for giving me the opportunity to train her. It's very exciting to have a filly that wants to run long like this so hopefully we get to the Breeders' Cup and I'm just thrilled with the way she ran today." 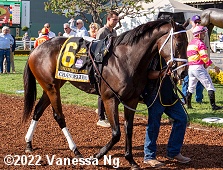 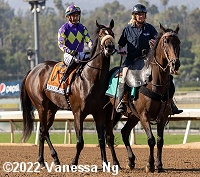