There were three stakes races run on the turf on opening day of the Santa Anita winter-spring meeting. Conditions were excellent in Arcadia, California, with sunny skies and temperatures in the mid 70's, however racing continues to be conducted without spectators as Southern California is under a lockdown. Despite the lack of fans in attendance, a new record opening day handle of over $23 million was set, topping the previous record of $20.49 million on December 26, 2018. Nate Newby, Santa Anita senior VP and general manager said, "We want to thank our fans, owners, trainers, jockeys and other stakeholders for supporting our racing program and contributing to a strong opening day. This has been a difficult year for a lot of people and we are happy to be able to provide world class racing for those watching and playing the races from home. We can't wait to welcome our fans and our employees back to The Great Race Place when protocols allow everyone to enjoy our tremendous sport in person. In the meantime, we are thankful to be able to operate as we are currently."

The first Grade 1 of the meeting is the $300,000 American Oaks (G1) for 3-year-old fillies going 1 1/4 miles on the turf, starting on the downhill chute. Edgewood Stakes (G2) winner Sharing was sent off as the 8-5 favorite in the field of 10 off a close 4th in the Matriarch (G1). In to challenge her included 7-2 second choice Capital Structure, an allowance winner making her stakes debut, and 11-2 third choice Red Lark, 4th in the Queen Elizabeth II Cup (G1) after winning the Del Mar Oaks (G1). 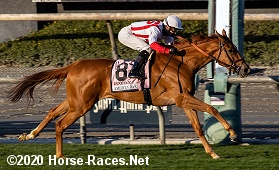 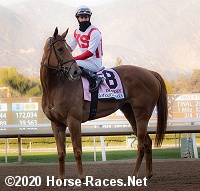 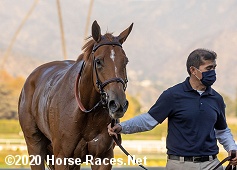 Left: Duopoly in the winner's circle. Jose Hernandez, assistant to winning trainer Chad Brown said, "She has been training really well, and she has been doing everything right. You cannot come from behind here; you have to be up close to the front. She used to run a mile and sixteenth, but now against fillies she wants to take the lead easily with her ears pinned back."

Right: Duopoly heads back to the barn after the race. 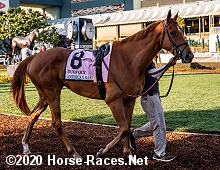 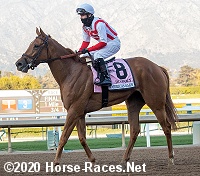 Left: Duopoly in the paddock. Winning jockey Flavien Prat said, "I thought on the backside someone was going to hook up with me but lucky enough nobody did. We had a pretty nice trip. She was full of herself and travelling perfect. When I asked her she really kicked in. She never really ran the distance but I guess Chad Brown doesn't come down here just to race."

Right: Duopoly returns after the race. 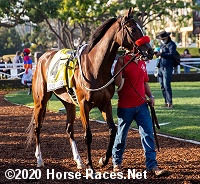 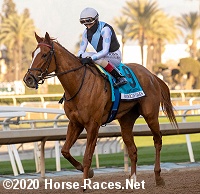 Left: Second place finisher Going to Vegas in the paddock before the race. Trainer Richard Baltas said, "She continues to get better. I took the blinkers off of her and I'm really proud of what she accomplished today. She did it in a Grade 1 and in a tough field with two from Chad Brown's barn." 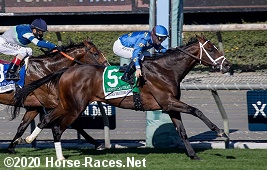 Kicking off the stakes schedule for the meeting, the $200,000 Mathis Brothers Mile (G2) featured a field of 7 three-year-olds going 1 mile on the turf. Twilight Derby (G2) winner and Hollywood Derby (G1) runner-up Smooth Like Strait was sent off as the 4-5 favorite over 5-2 Whisper Not, 2nd in an allowance last out after shipping from England, and 15-2 Scarto, 6th in the Hollywood Derby after finishing 2nd in the Twilight Derby. 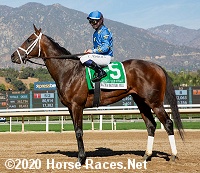 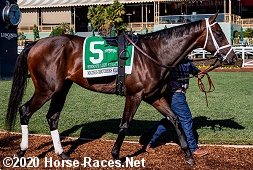 Left: Smooth Like Strait in the winner's circle. Winning trainer Mike McCarthy said, "I was surprised at how well he came out of the Hollywood Derby. He put in a couple of works that were I thought, maintenance type works, but everything he was showing me in the morning, and the way he was acting around the barn. I thought about it for a couple of days whether we should go or wait until March, give him a little bit of a break over the winter. But he acted like he had his mind on running today and I'm glad we got him over here."

Right: Smooth Like Strait in the paddock. Winning jockey Umberto Rispoli said, "We knew that Storm the Court would be going for the lead, so I just wanted to sit back of him. We got the perfect trip. There were a lot of great horses in this race, so when it came time to ask him in the stretch, he was ready to go. I went out earlier today to examine the turf course because it was our first day of the meet. I looked at all the paths and knew exactly what path to take in the stretch. And that's the one I took to get home. I have to give Michael McCarthy all the credit. We got beat by a very short margin in the last race, the Hollywood Derby, and one month later Michael had the horse ready to go." 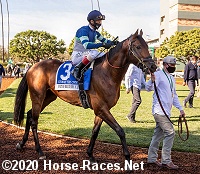 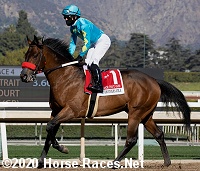 Left: Second place finisher Storm the Court in the paddock. Trainer Peter Eurton said, "It is the first time he has actually been on the lead in a race since the Breeders' Cup, and I told John (Velazquez) to see if we can put him in that position, where he is much more comfortable. He defends better than he fights. It was such a good race. At a longer distance, where you can get a control of the pace more easily and make it definitive that you're going to go there every time you run, people are going to have to come and get you. It was without question the best race he has run since the Breeders' Cup."

Right: Third place finisher Whisper Not returns after the race. The Richard Baltas trainee improved his record to 2 wins, 1 second, and 1 third in 7 starts, earning $43,892 for owners Christopher Dunn and Jeremy Peskoff. 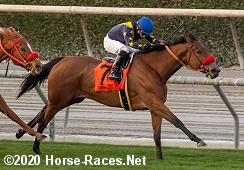 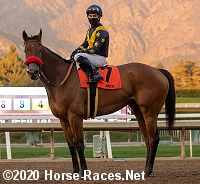 Closing out the opening day card was the $75,000 Lady of Shamrock Stakes for three-year-old fillies going 1 mile on the turf. Autumn Miss Stakes (G3) winner Warren's Showtime was sent off as the 5-2 favorite in the field of 10 over 3-1 Counterparty Risk, a maiden winner at 2nd asking, and 9-2 On Mars, winner of 2 straight in allowance company.