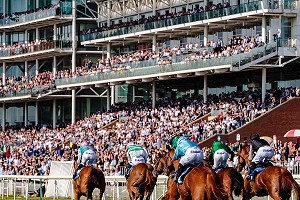 It has recently been announced that Royal Ascot is also now under threat to the Coronavirus pandemic. This is an event which always proves hugely popular amongst punters around the world, who visit the best casinos and many other platforms in order to support horses racing at the Royal meeting each year. But will they be doing the same in 2020?

Endless events around the world are being either postponed or cancelled due to the ever-rising threat of the Coronavirus pandemic. This includes both the Olympic Games and European championships, that have now been moved to 2021, having previously been set to take place over the summer months.

Racing has already started getting casualties, as the Grand National was cancelled, which meant Tiger Roll was unable to attempt to win his third successive National. The National Hunt season would appear to be over in Britain, and all eyes are now on the return of the Flat season. However, the first four Classic races of the British flat season having already now been postponed. These being the Guineas and Derby festivals at Newmarket and Epsom respectively, which was recently announced by the Jockey club. These meetings were scheduled to take place between May 2-3 and June 5-6. They are now looking to find alternative dates for each of the meetings, which are so important for the 2020 Classic generation.

Next up is Royal Ascot in June, and they are already preparing in order for the famous meeting to go ahead. They are considering an unprecedented move in order for the 109 year old event to take place in 2020 at the usual time. This will cover the event taking place behind closed doors if they are able to do so and the government has lowered the lockdown measures within the UK by June. This is likely, as things appear to be improving and the event is still several months away.

It would mean that connections can still target their horses on what is one of the biggest weeks in sport and of the year. However, what is Royal Ascot without the fancy dresses and hats? And wonderful party atmosphere, with around 70,000 people attended each day.

It is an unprecedented time this year and racing is not the only sport being affected. It continues to be a difficult time around the world and it would be a major positive were the Royal Meeting to take place in June.