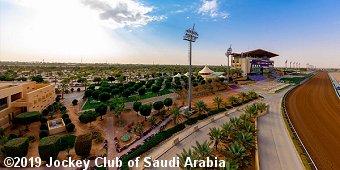 Saudi Arabia continues to impress onlookers, with their grand entrance into the sporting market. 2018 was their breakthrough year, as they hosted a Formula E race - which was the first motorsport event of global significance to take place in Saudi Arabian history.

This was then followed up with the hosting of a WWE event, as well as the World Boxing Super Series bout between Britain's Callum Smith and George Groves - the former picking up the WBA Super-Middleweight title in the process.

Saudi Arabia now look the likely hosts for the hugely anticipated rematch between Anthony Joshua and Andy Ruiz later this year, so it really is exciting times for the country as they make waves in the global sporting world.

Horse racing would appear to be the next sport that they look to showcase in their country, as next year they will be hosting the world's richest race. Known as the Saudi Cup, this will be taking place in February 2020.

However, this is no ordinary horse race. We've seen extravagant purses in both the US and Dubai previously, but the reported prize fund of $20 million is the largest in history. In fact, winning connections will pick up an incredible $10 million. Owners & Trainers around the world are already gearing up for the Saudi Cup, with discussions likely to have already started as to which of the finest racehorses in the world will be pointed at this prestigious event.

Furthermore, it opens up a significant opportunity for bookmakers to cash in, with betting volumes likely to be some of the largest ever witnesses. The bookmaking market has contributed substantially to the sport in general, and a significant chunk of responsibility can be attributed to the development of horse racing into a multi-million-dollar industry.

Given the PR and press it's likely to attract, punters will likely be as keen to get involved in the action. Typically, the Grand National, the Cheltenham Festival, and the Breeder's Cup are some of the more popular events. But this new event next year could set a new precedent, attracting both veteran and new punters to its tracks. From a technical point of view, the countless gambling strategies online will help beginners make the most of this new exciting venue. From a financial standpoint, could we be seeing a rise in this multi-million dollar industry, as a result of its venture to the Middle East?

The race will be taking place at the King Abdulaziz race track in Riyadh, Saudi Arabia. Surprisingly, the race will be free to enter, but contested by a maximum of 14 horses on the dirt track over nine furlongs. World famous Jockey Frankie Dettori has also given glowing reviews of the track and has said it is one of the best in the world. This gives greater encouragement to connections, and is sure to entice the world's best horses to compete in the race.

With prize money of $20 million, it will surpass the Pegasus World Cup in terms of a purse, which in 2018 peaked at a staggering $16 million, before dropping back. The Dubai World Cup also sits near the top of the list, with prize money of $12 million – nevertheless, almost half of the anticipated amount in Saudi Arabia.

However, Dubai will still sit top the list for the most prize money on offer at a meeting, as there will be a cool $35 million available across the six Group 1 and three Group 2 races on World Cup night. Other major races worth noting are the Breeders' Cup, Japan Cup, Prix de L'Arc de Triomphe, Melbourne Cup and the Derby. The Saudi Cup will now join this select group as one the world's best.

Our hope is that it takes the sport we love to the next level, and breeds interest within the younger generations.